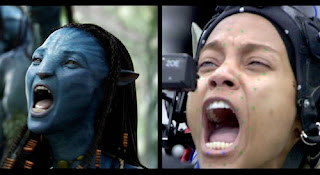 If you start a sentence with "acting is..." you had better be prepared to sift through the first dozen trite, highly subjective explanations that come out. Acting is, really, whatever it needs to be to show an audience something about the plot, the character, the theme, the subtext, whatever needs to be conveyed moment by moment. In this column I want to examine some of these mere moments that I find fascinating. How did they come to pass? What did the actor do to prepare, or not prepare, for what could be an insignificant few seconds of screen time to many? What emotion or truth were they striving to express?

James Cameron has never given up the goose on his Avatar universe, and as we approach almost the 10 year mark of the film's, um...titanic release and box office domination, it's getting a little ridiculous. Cameron initially said that he was planning two giant-size sequels after the first movie shattered records and brought back the 3D cinema craze. As the years wore on, he started promising more. And more. These days, Cameron keeps pushing back the start dates on Avatar 2 while consistently doubling down on his promises to completely change the modern blockbuster...again. He's like the absentee father who neglects to take you to the park week after week and hopes that a trip to Disneyland sometime in the future will fix it.

In the meantime, consider the career paths of the two lead actors of the original: Sam Worthington and Zoe Saldana. Worthington was treated by the studio system as wet clay to be molded into a viable action hero, and after the rebooted Clash of the Titans property fizzled out and Terminator: Salvation did very little to inspire confidence, it seemed Avatar was destined to be his biggest moment. Hey, there are four sequels being planned, currently, so...hope springs eternal. Saldana, for her part, parlayed her work in Avatar and the 2009 reboot of Star Trek into a steady flow of high profile work that included headlining her own action thriller, Columbiana, playing Nina Simone in a biopic, and joining the ever-expanding family of Marvel superheroes as Gamora in the Guardians of the Galaxy films. Oh, and she also played Rosemary in a TV miniseries adaptation of Rosemary's Baby. She's doing damn good work, and I've never come across anyone who had anything bad to say about her consistently grounded acting ability, her undeniable comedic timing, or her ability to convey raw emotion to the camera.

On that last note, we take a look at what is decidedly a "lion face" moment for Saldana in Avatar. The general consensus of the film has been tepid since it left the multiplex and came out on home video, what with the shallow story, simple characters, and blatant "white savior" position. No other actor really comes out of the film looking great, but Saldana's performance has a rare quality that has arisen since makeup and practical effects have given way to computers and motion capture: she is able to act through the layers of technology covering her up. In this moment, the low point of the film when the human colonists have toppled a gigantic tree that serves as the figurative and literal heart of the alien Na'vi culture, Saldana's character Neytiri lets loose with a wail and roar the likes of which humans might not have a capacity for.

I know, it might strike you that every "Lemon Face/Lion Face" might just be a big crying moment. But this is different. This isn't an actor summoning their own demons or that of their character to shed tears and lose composure. This is an animal howl of rage enveloped in an unashamed sorrow. Not only is it a valuable display of instinctual emotion, it's also suitably alien. You can't compare Neytiri's crying to that of a grieving widow diving onto a casket in despair. You can't find its elements of desperation or helplessness in someone wounded and lost in the wilderness. It exists only for the connection between this creature and the natural world that she has a literal physical connection to.

I challenge everyone to go back and watch this sequence. Not the whole movie, sheesh. Don't get nervous. I know, no one has the three hours to spare. But watch the whole sequence, and try to imagine all the different ways the scene could go. Neytiri could easily attack Worthington's Jake Sully, clawing at him in pure hatred. She could just as easily collapse and die of a broken heart. Even still, Saldana's greatest arrow in her thespian quiver, her distrustful and dangerous glare, could return as Neytiri flees into the jungle to plot revenge. This scream of unfiltered emotion says so much. And Saldana, to her great credit, was plastered in little mo-cap dots and wearing one of those Andy Serkis face monitors while doing this. Talk about soldiering on with her performance.

As much earned crap as the movie Avatar might receive, it frankly baffles me that Saldana was not given proper dues for how much she carries the film. And underneath all of Cameron's flashy bells and whistles, she gave such a captivating performance that I would have bought her character just as easily if the whole thing had been a stage play.
Labels: blog lemon face/lion face