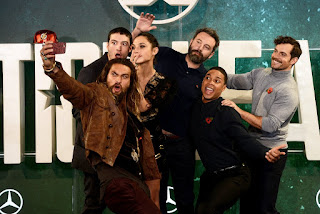 It's arrived, and it seemed to hit cinemas with more a contemplative growl than a boastful "MY MAN!" shouted into the swirling CGI skies. And the bottom line is, it's...okay. It's middling. It's a blandly inoffensive near-miss. It may seem harsh to be at all dismissive when talking about Warner Bros and DC Entertainment's big, main event that they were *totally* planning from the very beginning, but it's really not. Fact is, I'm just shocked this film is so coherent and passively watchable when it is so very clearly slashed to ribbons in editing and yanked in opposite directions of tone and vision by the two directors who made it.

If the origin films for Flash, Cyborg, and Aquaman had come before this one, I have a feeling it would have worked much better. As it stands, this film has the burden of introducing all three characters while holding together a big enough narrative that necessitates all six heroes and their gaggle of supporting characters. In just two hours, too. Because of this, this epic story of grief (over Superman's death), unity (none of us can be loners anymore, which is why all of us are written as antisocial loners), and humanity (Superman really was great, wasn't he? Dang, I wish he were here)...it all feels surprisingly lightweight for the series that routinely calls one hero a WMD, portrays another as a sadist, and includes a group of murderers and slobbering psychopaths as the delightful misfit B-team.

Part of the problem with this film is that the villain and his plot are entirely inconsequential. It's a kiss-off threat that only exists as an excuse to put together the hero squad. Steppenwolf is, frankly, as bland as an unsalted cracker and his world-threatening plot seems designed as a precursor to something bigger COUGH-Darkseid-COUGH that never comes. It doesn't help that the area of Earth being threatened is essentially a Chernobyl stand-in that seems to contain exactly one family of mute Russian stereotypes. That family certainly smelled of reshoots, which is weird. In this strange bubble where at least 30 minutes of necessary characterization and plot for folks like Cyborg has been cut, why must we spend at least five or ten minutes with a single specific family of bystanders?

As far as our heroes go, things are about a C-average. Cyborg is a block of wood. That doesn't seem to be an actor's problem, but a screenwriting and editing problem. Flash would easily be the most annoying character ever if he weren't also the only thing injecting any energy or personality into this dour affair. Ezra Miller deserves better than to be a cut-rate version of Tom Holland's new Spider-Man. Affleck looks perpetually morose, dare I say like someone shit in his cereal. He hits his marks and his cues, and waits courteously for his scene partners to have fun and finish up. Cavill's American accent is off, his creepy CGI upper lip is off in some scenes, and in general his performance seems...off. Not sure why, but it might just be the lack of Superman in any of these Superman films has shaken my grasp on the character...or his. Gal Gadot is perfectly fine, her Wonder Woman sadly missing the spark of warmth and vigor from her standalone film, but certainly retaining some personality and sense of moral fire. Aquaman is a grade-A frat bro, and that's a really weird choice. Jason Momoa is not without charm in and of himself, but the idea to make Aquaman a whiskey-guzzling fart rock deity marks him as the "Jayne Cobb" of the team. The meathead who constantly complains and makes snide comments. It's not a great look.

It says something really disappointing that the best sequences of the film depend greatly on supporting cast members, such as the break-neck chase sequence through the caverns and fields of Themyscira or the epic battle sequence fought thousands of years in the past against Steppenwolf.

I mentioned in my review of Thor: Ragnarok that the film's deft tonal shifts are one reason why such a crazy, packed film works so well. Here, it's the opposite. The tone of a Zack Snyder film that follows the death of Superman from the last film is going to be dour. Austere. Glum. And it is, in certain spots. In other spots, it's a Joss Whedon scene complete with the "Scooby gang" hangout sesh and jokes about each others' powers and costumes. Out and out riffing. While I appreciate the attempt to make this superhero extravaganza more fun, it's so strange that we get to watch Flash and Batman having an extended conversation about brunch and how weird it is that people do brunch, and within the same reel we're watching heartbroken Lois Lane and Martha Kent mourning the loss of not just Clark/Superman but the recently foreclosed family farm, the moral decay of city streets since the Kryptonian's demise, and the question of Batman's complicity in the death of a hero and his own humanity. It just doesn't really work. Say what you want about Batman V. Superman: Dawn of Justice. Honestly, I'll wait. But at least that film had a consistency. It was a joyless, sullen film about superheroes, but on purpose. A bad idea, but certainly a more deliberate one than this flavorless soup.

In terms of visuals, it does look a little more like a comic book movie. There's a real Alex Ross-style lighting on each hero, and a formal composition that says, "these people are gods, view them as you would a Greek statue," and I can appreciate the care involved with that. The action scenes are easy enough to follow along with, and the Snyder trademark speed-ramping effect has been either toned down considerably or just deployed with more purpose for characters like Flash and Wonder Woman, where it would make sense. The red-skied, blotchy CGI garishness of the trailers did arrive for the final battle sequence, and was a chore to deal with aesthetically, but at least there was a narrative reason for the DC heroes to be fighting on the green-screen sets of 300. It looked just fine. The visuals of these films is improving, if only in small increments.

It's a perfectly acceptable film. It's certainly not as bad as BvS, or as chopped up and incoherent as Josh Trank's Fantastic Four. That might be a big factor in why it lost so much money, though. There are some folks who really like Snyder's cold, anemic take on this universe and there are plenty who can't stand it. This film seeks to please all of them, and just can't. The lack of ambition is palpable. It's the very definition of "middle of the road."