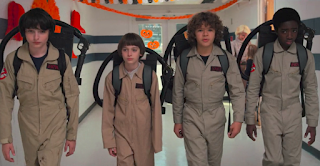 The teasers for the second series of Netflix's "Stranger Things" were heavy on warm and fuzzy imagery if you happen to be a child of the 1980s, a big sci-fi nerd, an "old school" gamer, or some combination of these. Ghostbusters. A strip-mall arcade. Dragon's Lair. Michael Jackson's "Thriller." A Reagan/Bush '84 yard sign. Vintage Eggo commercials.

Stranger Things catches plenty of  criticism from folks who are not charmed by the fresh faces of the cast, the proficient tension and lovely art design in the direction, or the binge-inspiring plot mechanics of the scripts. The chief criticism, as much of a killjoy as I find it to be, is valid. Detractors point out that if the John Carpenter/Tangerine Dream style score, the Stephen King plot elements, the Steven Spielberg/Amblin visual motifs, or any number of cute references and homages to 1970s and 1980s genre were removed, would this show even be worth anyone's time? Let alone everyone's deep praise and enthusiastic endorsement? 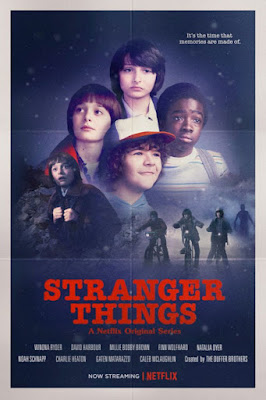 It would definitely be worth it, I think. The show's period setting and bottomless well of influences is all fantastic, but it's really the lovely gift wrapping in this scenario; the gift itself is the interplay between all these wonderful characters, the subtext about the grieving process and trauma, and above all the masterful subversion of the savvy viewer's expectations. But I didn't come here to write a review of "Stranger Things." I like it. A lot. There's the review. What I do want to explore is this idea of nostalgia as the window dressing. I do have to agree that without the tidal wave of 1980s frosting, the cake could have been more easily ignored. Take, for instance, a show like "Eureka," also about a small town with plenty of eerie goings on. It ran on the Sci-Fi (or rather Syfy) channel for five seasons, and though I'm typing these words about it right now, I'd safely bet that I'd forget it existed within a week from now.

So, yeah. Nostalgia is a powerful sales tool for "Stranger Things." Why is that bad again? Well, the way I graph it there are three prototypical points of view on nostalgia exploitation: 1.) viewers who recognize and embrace the familiarity. They eat it up, they like the taste, and they don't much care how the sausage is made. 2.) Folks who are aware of the calculation behind it, but still don't mind at all. References to things they like or remember are welcome, and it's endearing when those things are salvaged or rehabilitated into the current pop culture landscape. Finally, 3.) People who find such nostalgia-baiting as a cheap or tawdry ploy. They may go so far as to consider "Stranger Things" somehow deceitful or tedious when it uses something like Dig-Dug or The Goonies for its own purposes. They might take offense because of the derivative nature of it. They might take personal ownership of the pop culture artifact and not care for what they consider false pageantry or exploitation of something better than "Stranger Things."

That...kind of makes sense. It's a real wet blanket approach, and it feels passively exclusionary, but I understand the viewpoint. Hell, consider Star Wars for a minute. There are plenty of folks who scoffed at the derivative nods (or outright appropriation of much of the plot, character development, and visuals) toward the 1977 original in The Force Awakens, and much hay has been made about the pandering and fan service that may have bogged down Rogue One and distracted away from the main plot and characters. If you really want to understand this viewpoint, however, I mean to say that we should consider the Star Wars video games of late. 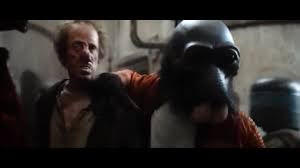 Electronic Arts, that bastion of consumer scorn, has managed to take a surefire intellectual property and convey nothing but contempt for their audience with their first two games under the Star Wars banner. Battlefront was a visual marvel, but it was at best half a video game itself carved up and sold in miserable pieces. The mechanics and level-up system were mediocre, effectively another competitive online shooter owing much of its ideas to Battlefield and Call of Duty. Meanwhile the sequel, out this week, has had nothing but bad headlines following it since the early access beta. Micro-transactions, loot boxes, and an insurmountable number of hours of crunching for upgrades have made Battlefront II little more than an update on the exploitative nonsense from the first entry. This all begs the question, or rather provokes the obvious answer to the earlier question...if you were to remove the fuzzy feelings a lot of folks have about Star Wars, would these games be the guaranteed hits they are? Would Battlefront II even warrant the furious backlash or the Reddit fiascoes? Would Battlefront even have a sequel if it weren't a Star Wars property? Probably not.

So, this idea of finding weaponized nostalgia off-putting isn't just a contrarian static to be ignored. Not all the time, at least. I do have differing feelings between this Star Wars anti-nostalgia backlash versus, say, something I take less emotional ownership over. Consider Transformers. Or Power Rangers. I don't really have fond feelings or memories about either. But I still recognize the way these properties have been mined and scrubbed as much as possible by their owners for any profit-based pangs of childhood remembrance and affection. And yeah, I find it kind of gross and devoid of artistic value. But I'm not about to tell people they can't enjoy it or take comfort in its permanence. I loved The Force Awakens and "Stranger Things," so who am I to talk? 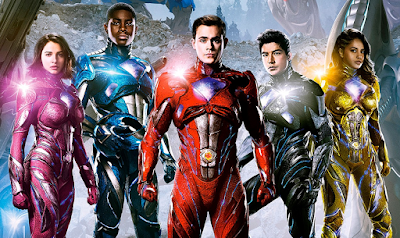 Perhaps the dividing line is the subjective determination of how skillfully the nostalgia was deployed. For instance, I didn't really get too choked up about the big screen glory given to Pac-Man and Donkey Kong in the odious Happy Madison joint Pixels. But I love those games. And every obscure 1980s television show dragged out for a cutaway gag on "Family Guy," much like the corpse of Jesse James, is just indifferently displayed and usually given some perfunctory throwaway punchline. When nostalgia is performative, I'm not terribly impressed. I feel "Stranger Things" and the Disney era of Star Wars, both the new films and the "Rebels" animated series, display more poise in their nods to the vintage or their outright appropriation of the finer elements of such. It's less exploitative and more penitent, and in the case of the Duffer Brothers show it elevates the material. Why complain about that?

This distinction needs some kind of term or signifier. Think of the term "cheesecake," a decades-old category for art and media focused on scantily clad or even nude women. You think cheesecake, you think Heavy Metal, or the airbrushed fantasy barbarian princesses spray-painted on the side of a panel van. Cheesecake is a category of things that ride a fine line up against exploitation and pornography, but do not necessarily cross the line. I feel "Stranger Things" should fit the bill as something that rides the line of nostalgia-baiting, but still exists within the confines of acceptable, enjoyable pop culture. I've decided to call this category "grilled cheese," because I consume this comfort food lovingly, not in spite of the easy combination of the ingredients or the decadence of it, but specifically because of those aspects. 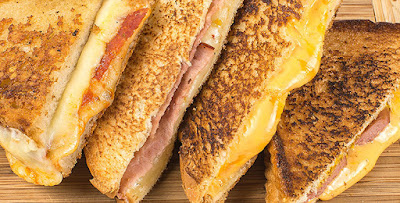 tl;dr - Sometimes nostalgia-bait is really good, and it doesn't always denote a lack of originality or a laziness on the part of the creators. Sometimes it works great, sometimes it doesn't. Much like pornography, I know it when I see it.