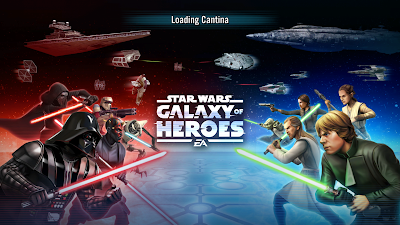 Star Wars has never really felt proper in a mobile game. This probably has something to do with how grinding and resource gathering lacks the urgency that the Star Wars brand demands. Just listen to that John Williams music and try not to feel a small jolt of adrenaline...then imagine hearing that music over a progress bar that takes two and a half hours to harvest metal so you can then wait another hour to build your X-Wing. See? It just doesn't jive.

The appeal of Star Wars: Galaxy of Heroes is that it drops you directly into a battle sequence, and not only that it also features all your favorite characters right out of the box, ranging from Luke Skywalker and Darth Vader themselves all the way down to the lowly Clone troopers and battle droids. But just like Star Wars: Commander and all sorts of previous attempts to wring more merchandising cash out of nerd culture, it doesn't feel so much like a Star Wars experience so much as it's literally any other mobile game that happens to have the Star Wars brand licensed. There's no epic story, no feeling of progress, no real attempt to engage with the material beyond renaming things to their in-universe counterparts (various play modes are named haphazardly as Cantina Battles and Galactic War, so whatever). In many regards, an apt description of Galaxy of Heroes is that EA took their cynical take on Star Wars IP that is palpable in both Battlefront games and applied it to the mobile PvP "freemium" model. 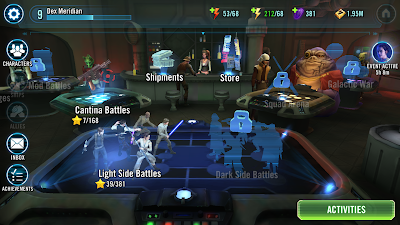 All the fanboy criticism aside, however, is it fun? Sure. It's a perfectly serviceable turn-based combat game with what seems like an endless supply of your favorite Star Wars characters to smack against each other like action figures. The combat can go as fast or as slow as you like, it's fairly smooth without any bugs or crashes on my Samsung Galaxy S7. I'd bet it doesn't run as smooth on any older devices, and mine did overheat quite a bit. And the modes of play, well they appear to be numerous. Between regular-degular single-player campaign combat via Light Side and Dark Side battles where you can only use good guys from the series or bad guys in your squad, Cantina Battles where you can mix good guys with bad guys, Galactic War which pits your entire collection of characters as one army with rotating squads in a 12-battle gauntlet, the Player vs. Player Squad Arena, and space combat in the Ship Battles, you have plenty of different systems to choose from. There's even a "hard mode" which offers the incentive of further rewards like character upgrades. 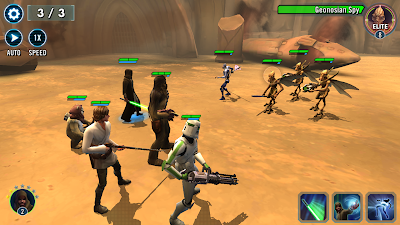 It all sounds so big and varied, but really it's the same thing regardless of which "mode," with only the reward systems to differentiate. It desperately needs some form of variation in weapon or ability swapping, or some action card system like Hearthstone does. And if you manage to crack the impenetrable, cluttered, text-box heavy menus, you might figure out which mode you need to grind on to earn which of the three currencies you need to stockpile for whichever bauble you want.

I say "bauble" because the endless grey little thumbnails of "equipment" for your characters are so lacking in personality, aesthetic, or any palpable difference in character performance that I'm not sure why they are needed. But don't worry, the game will assure you how necessary upgrades are, and railroads your character customization via prompts and helpful little indicators as to how far you can "train" your character towards the next level. These tutorial bubbles and notifications remain in the game, and remain necessary for me, after several days of play. That is an indicator that there's something wrong with your game design. Full-stop. 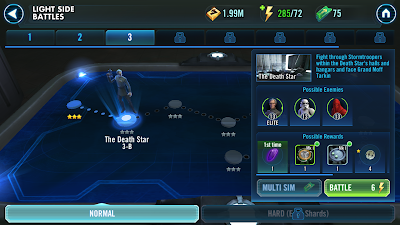 There's equipment, experience points adding up to a leveling system, a leveling system for each character's equipment load-out that is entirely separate, and none of these things can be upgraded with just one of the currencies but rather all three are needed at different points. To level up a character's equipment abilities, you need to train them via training remotes (a micro-currency reward) but you also need to collect character "shards" in order to level up the characters themselves, meanwhile the player has a separate level-up system to unlock the different play modes which reward differently...shit, I've gone cross-eyed.

It plays at being an RPG after a fashion, but all of this stuff is so randomly parsed out and doesn't really come into play during combat, so I have to call bullshit on the RPG boasting. All of this is pretty standard for a high-profile mobile game at this point. It's designed to keep the player as confused as possible and just continuing to click on the Pavlovian prompts without any real regard until they need credits, shards, data cards, energy, Cantina energy, or sim tickets to simulate a previously won battle in order to reap a possible new reward. 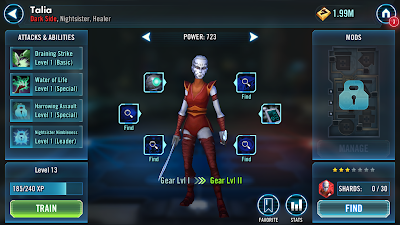 Thankfully, the saving grace that makes all of this non-combat menu navigation and micro-transaction nonsense pleasant enough is that Star Wars: Galaxy of Heroes comes front-loaded with an endless pile of rewards and gifts. Within a few days, I was treated to daily log-in rewards, a five-times-daily randomized prize in the store (usually a negligible amount of credits), a few marquee characters like Kylo Ren handed out, regular loot from finishing a campaign battle, and plenty of bonus rewards via the achievement system.

And then something entirely unexpected...two million credits, along with a "sorry for the inconvenience" message from the server. I hadn't experienced any inconvenience apart from the deliberate ones baked into the game's interface to tantalize me into spending real-world dollars, so this gigantic windfall was either a happy mistake or retaining players is incredibly important to the company right now. Guaranteed, if you are willing to grind and grind through single-player battles, you have hours if not days of free fun available. 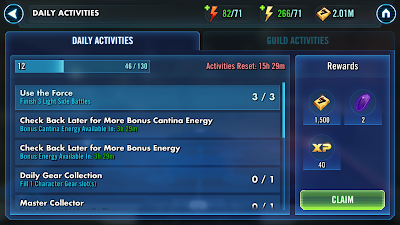 The other side of this coin is that the Player leveling system is the gatekeeper for most of the modes of play. I was aching to get some ships and engage in my beloved space combat. I think the turn-based system here is perfect for Millennium Falcons and endless TIE variants to duke it out. I still am not sure, though, because space battles are only unlocked at level 60. I almost feel like I can't judge this game fully yet, since I haven't even played the PvP system at all (unlocked after level 28). For all I know, this highly elaborate single-player content is merely a puffed up tutorial before dropping me in the deep end against real people, at which point I'll have enough time invested that I'll feel compelled to start purchasing things out of the humongous virtual store.The player level system tops out at 85 currently, and after a week of vigorous play on the train and in line at the pharmacy, I've only hit level 15. That's...quite frankly, that's more like the EA Star Wars games I've grown accustomed to.

It's a hit for me, but it certainly has a lot of the common symptoms of what limits mobile gaming: redundancy, the overly elaborate menus papered with walls of text, and the sheer amount of grinding necessary to even unlock the full version of the game are some hefty drawbacks, but I'll take them over the untamed avarice I expected. And in the end, it's an easy diversion featuring everything Star Wars. Between the music, sound effects, characters, ships, and robust updates and additions, you'd be crazy not to give it a download and try it out if you're a fan of the series.
Labels: blog Casual Friday