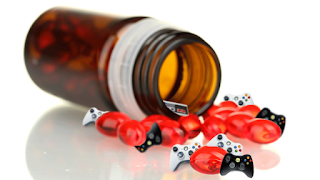 So, a little bit of geek news: if you already haven't seen your Twitter feed clogged by this, the World Health Organization announced that they will now recognize a "gaming disorder" in the ICD (International Classification of Diseases), a somewhat universal system of diagnosis codes and descriptions. This new disorder, according to the announcement, is a mental health diagnosis characterized by excessive, persistent gaming interfering or impairing "personal, family, social, educational, occupational, or other important areas of functioning." Essentially, it's a diagnosis of psychological addiction toward gaming.

This is a really big moment for me, folks. You see, while fellow "Sandwich" host Chris Pranger has experience in the gaming industry, as well as being an outspoken advocate and speaker in regards to the gaming community and mental health, I actually work for a healthcare company, and have previous experience in regards to mental health codes in the ICD. I'm not a practitioner by any stretch, but I have some fluency with the coding system and the process for adopting new descriptors like this. So, here's a little meditation in regards to the, let's say, divisive decision and some of the reactions to it. The first thing I saw about this was actually a stream of vitriolic tweets, some of which go something like this: 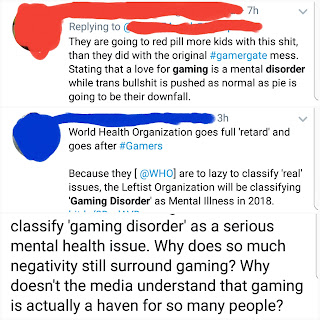 These got my dander up. To be frank, this is the kind of gross reaction (and lack of reading comprehension) that so easily engulfs public perception of gamers.

Do I think this new mental health diagnosis is targeting the gamer culture in particular, and unfairly criticizing people for their hobby? Well, no. Not even in the slightest. This gaming disorder will be specified in someone whose personal, social, occupational, or educational lives are being measurably impaired. Just a little FYI, this is the same language used to describe any psychological dependency, including gambling and sex addiction. If you play a lot of games, fine. Good on ya, in my opinion. If you spend the majority of your free time playing games, right on. If your social circle is typically folks you know through a game portal or on Discord and Twitch, that is fine. That is a social life. Don't let anyone tell you different. This isn't about criticizing the way you live your life. This is about identifying why certain areas of a patient's life might not function successfully. And if you think this is hyperbolic or hysterical, you clearly haven't met a large cross-section of the Internet.

Games are actually great! We all knew this. Games are a great development tool for kids, a great form of therapy for adults, and a great exercise in communication. There are so many mental health benefits from games. Games are not on trial, and really neither are gamers. Even the ones who may potentially be diagnosed. A diagnosis is not a declarative "there's something wrong with you," statement. The inability to even read the description past the headline, or see the difference between "being a hardcore gamer" and "failing to pay bills or shower regularly because there's always one more Overwatch match" notwithstanding, this diagnosis could be the first step to a way out of a vicious cycle of destructive action or inaction for some. It could help a lot of people who might not realize the severity of their problem. But as this news unfolded I've seen some arguments that have varied in nuance and dignity, ranging from "STOP DEMONIZING MY LEGIT HOBBY, NORMIE SCUM!" to something...er, well, not stupid.

One Christopher Ferguson, a psychology professor and researcher of media effects who has been fairly consistent in his research war on "video games are bad for you" medical conclusions, wrote a scathing denouncement of the decision that was dropped earlier today over at Huffpost. His chief criticism seems to be that by focusing a lot of attention needlessly on gaming, this diagnosis could do a lot to trivialize mental illness, as "gaming addiction" is likely to cause a lot of eyes to roll. It might not help on the insurance front, either. I can say with experience that the mental health field still has a hard time getting anything relatively new to be accepted as a clinical standard by the big companies paying the bills. At the time I was working specifically on mental health benefits and claims (2011-2015 or so), video conference calls between patients and talk therapists were not a covered service, as it didn't qualify as an office visit. Imagine someone with severe depression Skyping with their clinician, being charged for a fifty-minute session, and then being told that this fancy-ass "video phone" tech was just too experimental, man!

Ferguson elaborates that while actual substances like alcohol and drugs have chemical and physical reactions that make their specific categorization necessary, the prevalent idea in the mental health community lately has been to separate out as many different compulsive behaviors as their own diagnoses as possible. Why? Well, lots of reasons. Politics, of course. Gamers are all too familiar with video games replacing rap music as the greatest evil in the entertainment industry per a whole lot of politicians around fifteen years ago. Rap was the replacement for trippy cartoons, or death metal...I don't know, it's hard to keep up. But there's also more money to be made as long as there are new (possibly claptrap) diagnoses. Think about it for a second. Therapy for smoking cessation is fairly straightforward and is billed pretty reasonably. Therapy for a disassociative disorder requires more research, more contact, more experimentation with more methods. It costs more. When a new diagnosis comes along, how much should it cost? For the first few years, who knows? So, Ferguson concludes that a more catch-all "behavioral addiction" classification could cover the fairly basic premise of "forming a habit out of pleasurable or satisfying, repetitive behavior."


It's true, addictive personalities can form a psychological dependency on some of the damnedest things. Collecting bobbleheads, reading Creepypasta stories about Slenderman, weight training, writing long blog posts...any recurrent behavior has the potential for compulsive repetition. But you know what? Constantly drinking, smoking crack, and betting on horse races are the more noticeably destructive ones. They need to be separated, because they have different effects, and they are adopted for a lot of different reasons. Oh, and they react differently when coupled with an existing mental health disorder.

And in recent years, compulsive gaming has been emerging as a noticeably destructive mechanism. I point you to the case of Lester and Petra Huffmire, along with a steady stream of other parents sentenced to years in prison for neglecting to feed their children in lieu of MMORPGs. Yeah, there's plenty of truth in "gaming addiction" being a cringe-worthy new necessary conversation, especially with people suffering from real problems like an endless opiate epidemic, but we can't swing all the other way in the other direction and treat compulsive gaming and social media like a quirky, mostly harmless addiction. It is not mere bubble-wrap popping. Kids didn't starve because their parents were occupied with excessively playing "Six Degrees to Kevin Bacon." Gaming has more urgency, artificial and real stakes, and external stimulation than other behavior. Much like electronic gambling. By ignoring that distinction, I'd argue a lot of problems would go unsolved.

tl;dr - The doctors aren't coming to take away your PS4, friends. In the meantime, maybe let's consider that other people might have a problem, and grousing about how it affects your enjoyment of you entertainment machine, or how it might cast your pop culture community in an even more negative light, isn't a great look to begin with.
Labels: blog tl;dr