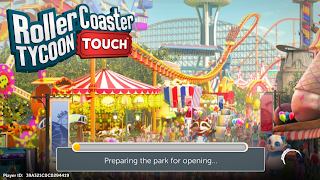 I adored the original Roller Coaster Tycoon, much more than Theme Park, which in all its iterations has always focused more on the winning and losing aspects of the simulator and less on the creativity of a virtual sandbox filled with burger stands and Ferris wheels. That first RCT could be whatever game you wanted: a rigid simulation of running a business, a freeform zen garden of topography and landscape decor, an exercise in sadism crashing roller coasters into targets or stranding guests on pathways and endless lines to nowhere, or any combination of interests. I once spent half and hour recoloring and renaming all the rides to be themed to the (at the time) defunct Valiant comic book universe, with coasters called "The Harbinger" and "Bloodshot." Why? Because I could, because I was Superman playing with my own personal bottle city of Kandor.

I never enjoyed another RCT game the same way. The freedoms of the first game seemed to give way in exchange for options to become heavily goal-oriented. Suddenly, the scenery around my attractions wasn't mine to command, it had its own progress bar and guest satisfaction stats, and it became work. The graphics got better, and the focus was put on "Build your own 3D roller coaster, then RIDE it!" which, um. Sorry, I didn't want to watch an animated POV video of a cartoon roller coaster, even if I designed the thing myself. I'm here for the "Oh no! People are spewing all over the path around the Nausea-O-Whirl and you need balance your janitor budget!" That stuff got removed pretty early on in the franchise, along with the cheeky ability to fire a loop-de-loop coaster at 200mph into the artfully sculpted bullseye made of roses and pansies that occupies the back of the park. 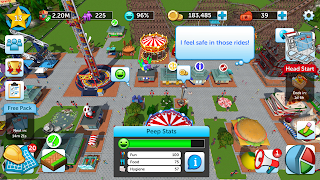 So, anyway, I went to check for any mobile version of the original Roller Coaster Tycoon, and lo and behold, there is a full port of it that comes in at $5.99, which is honestly a pretty reasonable price for the amount of hours I've spent playing that game. Before pulling the trigger, I decided to test the waters with one of the freemium versions of the franchise that Atari has built for Android and iOS. While "Roller Coaster Tycoon 4 Mobile" appears to be more grounded in social media sharing and simulated gambling, RCT Touch seemed to be a stripped down version for singular casual play, just what I was looking for.

The initial loading time is staggeringly long for a game of this caliber, but after that everything is pretty instant and responsive. There's a bit of lag when lots of guest bubbles and animations clog your screen or you try to navigate too quickly. The basic gameplay is fine, the standard RCT activity is solidly produced with each attraction and decoration organized on a grid. Each also has its own menu, with the ability to change paint schemes and pricing and to view the attraction's stats all working great. But the modern touches have really clogged up the whole experience by putting all park assets on a card-based leveling system. I'm sick to death of "cards" in mobile games. Star Wars: Galaxy of Heroes seemed less a combat game than a complex system of level-up processes, and now Roller Coaster Tycoon isn't content to just let me use in-game currency to buy a cotton candy stand...it needs me to collect a second currency through goals and achievements in order to make my cotton candy stand better, somehow. Frankly, I thought I'd leave that to my virtual cotton candy artists, because I'm much too busy building giant spectacles. Or, rather, unlocking card decks that might grace me with the ability to spend my money on a spectacle. 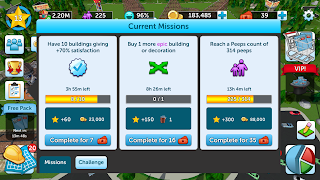 The game looks just great. Cartoony, but in a pleasant, pastoral way. Much like the original, but with the sharper, SimCity 2000 edges sanded down to a more modern look. I did find the "Seasonal" settings and content quite tedious, this being January and my options for decorations cluttered with santas and snowmen, et cetera. The snowy weather was just making it more difficult to see my pathway mistakes, so I turned it off. I never really understood why mobile games have ever had a temporary holiday theme glued on for a month or so, and some of them are downright militant about it from mid-September through April. RCT Touch is no different, with a Valentine's Day and Easter set on the way. 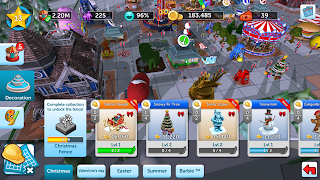 Simple button controls are fine for the most part, but this endless nesting of menus and categories is an inconvenience. Touch controls were not meant to be used for designing roller coasters, either. Especially when the standard two-finger screen rotations and pinch-zooms are your navigation. My first custom coaster was a disaster, but I'll get back to that. Pathways are the same problem, as it requires three separate, locked "modes," one being the ever-necessary Eraser, another mode just being "Camera" so you can see what a mess you've made. Helpfully, the game does provide a "Park Editor" mode that pauses the simulation so you can move things around and re-organize it without ruining your guest ratings.

Similar to the card leveling, every aspect of the park is now a player goal, including how much scenery and decoration is surrounding a ride. This. Sucks. I don't want to spend all my time trying to re-position my begonias to overlap the three tiny rides I can afford, giving each of them a whopping two percent of decoration. I didn't even want begonias! And putting the decorations and scenery on this grid-based system with rides and other buildings, so that every tree or rock can serve to increase your stats, just makes organization a headache. 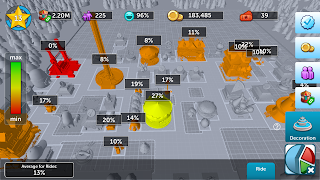 I'll say this, someone at the Atari subsidiary that created this game is smart, but in a condescending way; you see, as the park and attractions make money, you are tasked with touching the little money bubbles over each one to collect the currency. I should think, in a game where $200,000 transactions become commonplace before level 10, that this should be an automatic process, but that would rob me of the sad, pathetic flood of dopamine my slightly compulsive brain gets upon clearing all these balloons in a tap-tap-touch frenzy. It's a cheap, addictive way to get repetitive play and it works. I hate myself for falling for it. 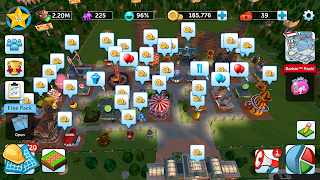 In the meantime, I only have one roller coaster after a week of vigorous play. That's, well...that's unacceptable, honestly. For whatever reason, the entire roller coaster aspect of this game is the most faulty and poorly conceived part. The card system doesn't apply to whole coasters, but to different styles and parts (wooden or steel, rails or suspension, etc.) and in order to build a coaster you must collect the station, trains, tracks, and special maneuvers of a set. That's hard enough, since the cards are "found" purely through randomized decks. But also, if you don't want to throw your phone out the window in a rage at the crappy custom builder controls, you can (re: sorta have to) collect a card for the blueprint to a stock design. These are impossible to get. You can't even buy specific cards with real money, if you're ready to break down and pay to win. So my first coaster, which the game gifts to you at a certain level so it can run the tutorial on building it, is still the only coaster in my park. In a Roller Coaster Tycoon game, this is on the level of blasphemy.

The amount of grinding is almost draconian, but luckily the achievements that pay out both currencies don't plateau too early, and if you step away from the game for an hour or so your revenue will always fill up, helping you along to your next little passion project, be it a salad shack or another haunted house. It's one of those time-wasting apps that seems designed, much like Candy Crush, to get you just far enough that you will consider making a real world purchase to move forward. But the sandbox element of the original is there, in miniature, and it's free. Can't complain too much, but it's weird that I'm seriously considering spending six bucks to just get the real game without all this micro-transaction, wait-gate nonsense that plagues the mobile platform. 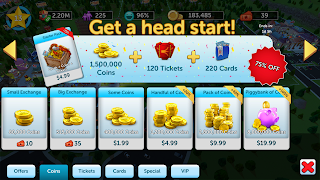