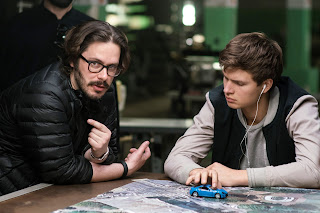 Edgar Wright has always been a master of choreography, but when every gunshot and every gearshift in the film is as perfectly synchronized to the insanely specific soundtrack, oh and said soundtrack is entirely diegetic and meticulously curated by the protagonist to convey mood and intensity of the situation...Baby Driver is a gritty Michael Mann film staged as a glitzy musical for under $50 million. How impressive is that? The "getaway driver" film is a genre that, at best, always rode a fine line between empty dudebro spectacle and a truly unique artform, and it's clear that this one falls in the latter category, albeit with some elements of the former being used.

As far as performances, Ansel Elgort gives a star-making turn. The lack of pretension and amount of small emotive moments he packs into a character who spends seventy-five percent of the film hidden behind shades and earbuds is impressive. But really, it's his easygoing back-and-forth with Lily James and his entirely unashamed grooving to his tunes that lock him in as someone to watch. James herself, though given not nearly enough to do, is sugary sweet and the perfect bold foil to Elgort's titular Baby, who is quite timid outside the realm of his iPod or a driver seat. I've worried about Jon Hamm's career since the end of "Mad Men," but here he gives a genuinely scary characterization and demonstrates a big character arc that secondary players rarely get. Jamie Foxx is appropriately irritating and off-putting, but I legitimately cannot tell how much of his character's unhinged bluster is the actor's huge play-it-to-the-rafters choice or the screenwriter's clever choice of meta-affectation. Kevin Spacey is the weak link for me; I felt like his sedated intimidation schtick just couldn't keep up with Wright's dialogue or the large performances surrounding him. I'll admit, that might just be the uncomfortable parallels between his character and the actor himself being revealed as something of a predator or cajoler of much younger men.

While the getaway that opens the film is a heart-pounding exercise in timing and inventive stunt gags--which is impressive enough in its lack of CGI assistance--the action crescendo is actually a foot chase through the streets, parks, and malls of Atlanta that, in my opinion, now possibly beats out Wright's much-loved Point Break inspiration for the scene. The handheld camera work in that sequence manages to be as tightly paced as a Sousa march and as ragged and jarring as a mosh pit. Atlanta is a city often used for filming these days thanks to Georgia's tax incentives, and while Wright could have probably sold it to an audience as a sun-splashed Los Angeles, he instead chose to use the city's personality to inform the cinematography and staging of the meticulous action set pieces. It gives the backgrounds a lot of production value; too often a film like this suffers from a fresh coat of paint or a drab concrete jungle aesthetic. Not Baby Driver. It includes the more pastoral city blocks surrounding Peachtree Center Mall, the southern fried diner in Forest Park, and even numerous local businesses like Octane coffee and the ritzy Bacchanalia restaurant. The film's focus lies on the music, and the cars, but it also doubles as a love letter to a visually diverse American city.

A lot of detractors have rightly pointed to the thin spots in the structure and relationships standing center stage in the film. The romance between Baby and Debora doesn't get enough time to marinate, and the heel turns from several of the robber characters lack much of a connector to their early scenes. But there's a definite melody to where the big standout moments reside. Narratively, there's nothing more interesting than showing us exactly how slick this heist team is in the opening scene, and then showing in the next two robberies just how clumsy, shortsighted, impulsive, stupid, and feeble they are the moment something goes wrong. In many places, it's a study in jazzy subversion. The plot continues to bait and switch the audience, setting up first Jon Bernthal and then Jamie Foxx as the robber with a huge cross-hair aimed at our young hero. Even Spacey is set up as a primary antagonist from moment one, but in the end all of their huffing and puffing amounts to less than that of the initially congenial Bonnie and Clyde archetype played by Hamm and Eiza Gonzalez. And while some of the broader bits of plot (one last job, a member of the crew being an unstable psycho, a late night transaction gone wrong, and Baby's entirely crazy tendency to record dangerous people without their consent) might seem incompatible with the sharp production, they do fit the retro-cool approach to the genre.

It's not without the usual issues of an Edgar Wright film: both Gonzalez and James are treated less as characters and more as conceptual romantic ideals, the third act seems less concerned with plot as it does with keeping a breakneck pace, and some of the latter action sequences (after things get less balletic and more slapdash) could probably be shaved down by a few minutes. Baby's regurgitation of snippets of films is one of Wright's oldest and sometimes most laborious stylistic flourishes going all the way back to "Spaced," but here at least it's finally deployed as a plot point, and character development for the young man who seems to lack social skills. These are all nitpicks, as far as I'm concerned. This is not a deep meditation on the psyche of the thrill criminal (although there are elements of that crawling all over Foxx's character), but rather a technical challenge wrapped in the trappings of simpler diversions like Vanishing Point or Two-Lane Blacktop.

I loved it. I think it'll stand the test of time as one of the best car chase films of the decade, and it might be the film to cement Edgar Wright as one of the big boys on the block who can dazzle with a relatively small budget. I hear such a thing is in pretty high demand at the moment.


This review is a part of Kyle's Letterboxd profile, which includes reviews and movie lists not covered here at the blog, including a ranking of several franchises and excerpts from the book, Cinema Autopsy, which is available on the Amazon Kindle store.
Labels: blog letterboxd reviews