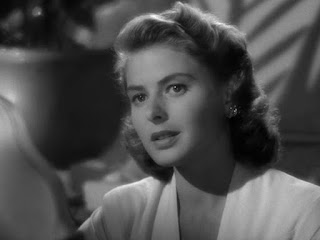 The 1930s and 1940s were not the best era to be a young, beautiful actress trying to break into the Hollywood system. I mean, hey. As has become quite clear to everyone in the last year especially, it has always been quite the dumpster fire. But back then, actresses had nary a public platform and were literally bought, sold, traded, and loaned between studios like show horses. One such actress was Swedish screen legend Ingrid Bergman, who had just stepped onto the scene via an American remake of her earlier Swedish film Intermezzo. Yeah, American remakes are as old as the industry itself.

A few years later, Bergman would be one such actress "on loan" for a picture that no one seemed that interested in making, some romance plot set against the backdrop of European citizens fleeing the Nazi invasion of the continent. It would prove to be her most beloved performance, and her most notable film. While Casablanca would mostly be regarded as a Humphrey Bogart film that Bergman co-starred in, her presence on screen seems to grind the snappy noir dialogue and cynical characters down to a more natural, wistful tone. Bergman's character Ilsa embodies the dignity and joy of European life that was threatened with extermination. She is why her underground hero husband Laszlo fights, and she is why Bogart's Rick may finally step up and start to do the right thing after so long proclaiming himself to stick his neck out for no one.

Bergman also completely commands the scene that brings Ilsa and Rick together for the first time since she left him standing in the rain at a train station a year and a half previous. From the time it takes her to smile nostalgically at Dooley Wilson's Sam and request "As Time Goes By" to her being shuffled away by Paul Henreid as Laszlo, only around four minutes passes. Bergman gets maybe seven short sentences of dialogue, but tells the heartbreaking breakup story with her seemingly involuntary reactions to how everything has changed.

Once Wilson begins singing, Bergman's face is all reminiscing half-grins. But quickly, regret plays across her face and she stares off. The memories have become painful. Even further still, the pain hardens on her features into something that may be resignation. Resolve. She made her choice, and it kills her to this day, but she made the right choice.

Once Bogart stomps in to halt the song, their special song that has since been forbidden, the sight of each other threatens to drown them. Bogart, to his credit, gives the barest of micro-expressions, a quick tightening of his face in pain and defeat. Bergman's eyes have welled up. It's a chemical reaction. Pure devastation. She seems to have trouble breathing.

And you know what? That would be more than enough. That would seal this as the emotional fulcrum of the film, and cement Bergman as a powerful leading lady. But this isn't even the moment in the scene that I'm truly impressed with.

When Laszlo and Captain Renault enter the club and sit down for a drink with Rick and Ilsa, unaware of their past, they have to play it casual and courteous. But Rick's easy recollection of their time together in Paris brings palpable elation to her. He hasn't forgotten, hasn't stopped feeling for her. Her breath visibly quickens and she smiles an intoxicated glow. Then, as Laszlo and Renault chat briefly, her face goes dark and her eyes meet Bogart's. Bergman conjures such shame and apology in this look. She cannot say a word in front of her husband, but so much remains unresolved. All she can do is pour heartache into that brief glance, and all it will do is make the pain fresh again for both of them. That two seconds of Bergman staring upward breaks my heart. Every time.

When it's time to say goodnight, all of a few seconds later, Rick's farewell is cordial enough and Ilsa's final lines are of Sam's rendition of "As Time Goes By." She smiles again, only now it's a concession. "There's still nobody in the world who can play 'As Time Goes By' like Sam." An admission, a consolation, that no one will ever quite replace Rick in her heart, and that they will always have Paris.

Bergman went on to collect seven Oscar nominations and three wins over the next three decades. Through her career she cultivated a reputation with directors and crews as being the most consummate professional, an efficient and receptive performer who never checked out for the night after even a grueling day of shooting. She was a picture of natural realism, and I think I can say that the cultural and artistic landscape has been shaped by her magnetism and her emotional honesty on screen.
Labels: blog lemon face/lion face