Evidently, becoming dependent on sugar and fat and then suddenly cutting it down drastically isn't the greatest thing in the world for mental health. Everything seems to be affecting me more. Criticism brings me sinking to my knees. Small mistakes at work cause my brain to short circuit, and I have to actually stand up and step away before I can reboot and fix it. You know that old line about religion being the opiate of the masses? I think sugar is the opiate of the masses. At least, for the masses who aren't already on opiates.

Suddenly, I recall a strange day on the school bus in fourth grade, where classmates were, to my abject horror, snorting Pixie Stix. Pixie Stix always struck me as a nakedly lazy confection. "Let's not even bother shaping this sugar into anything. Let's just dye it purple, throw some artificial flavoring into it, and then sell it in little paper tubes that resemble coke straws." It's strange to think that there are probably parents out there right now going bonkers over the thought of kids eating Tide Pods, and yet that same parent might have snorted Pixie Stix at one point in their life.

Never mind. I'll be straight with you, today is a bad day. Last night was a weak, "Let's just buy pizza" night, and though I also paid through the nose for a salad and avoided the pizza, I woke up with some form of psychosomatic heartburn. I'm apathetic, I feel ignored, and judged by everyone around me. Not sure how I can have the irrational feeling of isolation and the irrational feeling of self-consciousness at the same time, but it must just be the poorly constructed cocktail whipped together by the abrasive, luau-shirted Tom Cruise in my brain.

Thankfully, this sugar deprivation has been met with exercise, and though my lunchtime bike ride was only an easy twenty minutes it woke me up and kickstarted that part of the brain that feels starved for stimulation. Have I really gotten to that part of this process where the exercise portion is the enjoyable part? That's an odd feeling, but I'll take it. Especially when I'm within shouting distance of the lowest weight I've been since college. 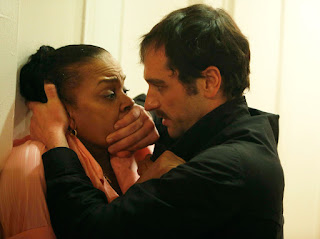 The second episode seems designed primarily to showcase Philip and Elizabeth's crisis management abilities. Beginning with what looks like a major break in their ability to listen in on US government officials, the relatively small plot to plant an audio bug in the study of the Secretary of Defense inadvertently becomes a rough-and-tumble, sloppy mess that hints at a widening gulf between the two KGB sleepers. Elizabeth, as we've seen, is loyal to the Motherland to a fault, while Philip has allowed himself to grow accustomed to their surroundings and has learned to question their handlers. So when they are ordered to plant the bug within several days when typical tradecraft procedure would require a few months, Philip insists they call it a wash and inform the higher-ups of the "operational impossibility." But Elizabeth insists that the General and other brass are smarter than that; they would not trust the Jennings team with such a timetable unless it were doable.

There's a lot to like about this first proper mission plot, from the old-school use of a poison umbrella tip, the savage fight between Philip and Viola's brother, and the thick tension of the Secretary's study when the loyal maid makes the swipe and replacement of an unassuming mantle clock. What I really enjoyed was how the mad rush to generate sympathy for the Jennings team from "Pilot" came to a crashing halt, and they were allowed to be more morally grey. In a smart reversal from Elizabeth's sex romp at the opening of the previous episode, this one reveals that Philip also routinely uses sex as a tool of the trade in order to flip an asset, in this case a slightly unhinged wife of the Secretary's underling. Though Elizabeth's chagrin at her husband's lothario streak with this dizzy dame doesn't reach the plain seething that Philip displayed while listening to his wife's work-related escapade, it's fair that one aspect of their relationship is entirely real and personal.

I really like Matthew Rhys so far as Philip. Because this episode puts him in the driver seat, menacing Viola the maid with the antidote that will save her poisoned son and also bedding the undersecretary's wife as two different cover characters, we get to see his level of brutality when backed against the wall during an operation, but his sense of professional propriety does come with a level of mercy for the innocents who are used and tossed aside. When the maid's Christian guilt at betraying her employers becomes a roadblock, it would have been prudent to just kill Viola, her brother, and her son and start from scratch, or so Philip's superiors might have counselled. Instead, all three live and the job gets done.

Elizabeth's behavior during the crisis of the clock is a little less rational. A noose seems to be tightening in her mind, as she frequently frets over what will become of the children should they be eventually captured, possibly by their new FBI neighbor. Her failure to compartmentalize as well as her husband does result in a beautifully reverent moment of ear piercing with 13-year-old Paige, but throughout the episode it sets the precedent, along with the pilot, that lying to the children feels palpably painful for her and it might just be a matter of time before she places too much trust in her decidedly not-Socialist offspring.

We also get a B-plot that digs deeper into the tactics and personal morals of one Stan Beeman, the FBI agent tasked with finding Directorate S who happens to live across the street from two of them. The writing staff of "The Americans" walk the thinnest of lines in illustrating Beeman's aggressive but not quite yet dirty tactics for intimidating his own assets in order to infiltrate the Russian embassy.

His schoolboy bully move of stealing expensive caviar off some hapless fence shows that he's not far removed from going "Bad Lieutenant" in order to make the Dean's list.  Beeman sharing the caviar with Philip could be seen as him probing his neighbor, but if Beeman really suspects something of Philip he'd either be the world's greatest detective or merely the most paranoid law enforcement agent of all time. At this point, he's poised for either, but either way he's also just kind of a knob.

-Power plays and high-level intrigue seems to be plaguing both the FBI and the KGB, with directorial transfers and insinuations of some kind of changing of the guard. The two superpowers really were more similar than either would admit at the time.

-Do the Jenningses have a heart-to-heart about being arrested and tossed into Guantanamo before every op?

-Better question, does Philip have a silly hairpiece for every occasion?