Okay, okay, so I ate some onion rings. And some ice cream. I might have had a bite of fried chicken tender off my daughter's plate.

Fine, I turned my birthday dinner into a free-for-all family style dining situation, but I did order a salad for myself. I think this is why my weight has held steady this week no matter how hard I attack the cardio equipment. I'm back to my old eating regimen, with no real restraint. Hopefully the whole birthday scenario is just lulling me into a false sense of security and I can get back to business next week.

I haven't taken a day off in the gym, though. Surprisingly, the habit has taken hold, and it's more of a bodily requirement than a sad obligation. I'm anticipating the time when I start slacking off, but I've been much more disciplined on the workout than on the diet. I'm also fixing to see my doctor for the first time in quite a while, so I'm paranoid about my blood pressure and vitals and such. Oh, they give you so much to worry about on those machines, don't they? 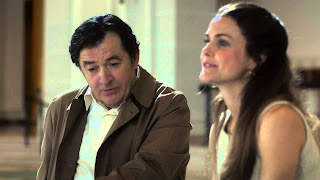 The FBI has just declared war on the KGB over Amador's death. Stan Beeman, drunk and distraught, goes to the only friend he has left, his straight arrow travel agent neighbor, and delivers another of his little truisms that happen to apply to the both of them: "You can't be married and have no secrets." His opening up to his professional rival, unwittingly, is the first sign of genuine defeat from 'ol Captain America. It's one of several centerpieces of how this secret espionage war is a result of Stan's first big philosophy lesson, how to cause your opponent to make mistakes.

Nina is also suddenly at a weak point. She knows damn well that the FBI took Vlad, and she isn't letting it go. The clumsy excuse that Vlad was killed in a mugging is no more convincing than Joyce Ramirez overdosing in a car. Nina opens up about sweet young Vlad, and I wonder if this is the beginning of the end of the Stan and Nina show. Nina will do pretty much anything she needs to do in order to survive, but she's never had to sell out anyone she actually cares about or likes as of yet. Will she pick Stan over the Motherland in some monumental way? I'm not sure how I've convinced myself that Nina is the key to everything.

Elizabeth is cracking under the pressure of being the sole authority over the kids. Paige's impotent rage and Henry's listless depression are now starting to aim directly at her for sending daddy away, and admittedly Philip has a way with the children that fosters compliance. It's more of their dichotimy as a couple; Philip can coerce like no other, but Elizabeth specializes in defensive strategy.

Amador's missing ring is the smallest detail that anybody might miss, especially moving as fast as they were. That ring's whereabouts turns out to be the smoking gun. Once Stan has the wherewithal to link Amador's death to a street hood from Philly who was somehow involved with Joyce Ramirez going off the map, it starts to look like...well, exactly what it is. A homegrown KGB network. Stan's bracing of the junkyard guy indicates how casual he's being about no longer being squeaky clean. Not like it matters. AIC Gaad is ready to burn down the Rezidentura. But I wonder, how is it that no one in the FBI office knows about Vlad being executed?

Meanwhile, Claudia quite reasonably takes the news that Gregory's man got pinched as a sign to start the exfiltration process on Gregory himself. An apartment in Moscow, a stipend, a job briefing cadets on life in the US, etc. It all sounds swell, except we know how reliable such promises are from Grannie. Joyce Ramirez knows. Still, Claudia and Elizabeth go through a great many pains to convince their American asset to take his iron parachute.

Philip's only task within this situation is to be the one who pulls the trigger on Gregory, if the need should arise. Claudia asks this of him because she knows that Philip can't stand Elizabeth's relationship with her first recruit, and also because everyone knows Elizabeth will let him disappear. Gregory himself knows how it all plays out: either learn to love Moscow, or eat a bullet. He just chooses a different bullet. It's fair to say that Gregory would rather go down fighting, but it's also possible that he uses his last act of service to protect Elizabeth. Not just from the FBI's prying eyes, but also from her knowing that Philip was the one to pull the trigger.

For an episode where a lot of things occur, this feels like the necessary clean-up episode after the tense rush surrounding Amador's fate from "Safe House." For the most part, everything is reset to square one regarding the secret war that has been sparked. Everything except the icy relationship between Philip and Elizabeth, who end the episode in separate living spaces, feeling like garbage. That and the lingering doubt for Nina whether sweet Captain America is actually a capitalist goon who snatched and killed poor Vlad. And the bad taste Gregory's demise must have left in Claudia's mouth.

Random Notes:
-Martha is deeply upset about Amador's demise, and tellingly we don't see her evening with "Clark" where she divulges about the missing ring.

-No word on Gregory's theoretical adjustment to Moscow including being the only black man, like, ever. Elizabeth's notion that "everyone would be in awe of you" might have played a part in Gregory's final decision. I doubt he would enjoy being a government-sponsored attraction.

-We never do find out if Gregory's captured man knows about The Cause, or if he believes himself to just be muscle for a drug dealer. As far as Stan and the show is concerned, it hardly matters. What matters is that he did flip on Gregory.

-So much hay is made over how shitty, dreary, lumpy, and depressing Philip's motel abode is, but I feel like it's being oversold.

The last episode started out with a heart-to-heart between secret adversaries Stan Beeman and Philip Jennings that felt reminiscent of the coffee shop conversation from Heat. It's a tremendous moment, when two people of equal talent, wisdom, and cunning at their opposing purposes can speak on the same level and share their perspectives. That seems to be the ultimate purpose for this episode, to accurately portray each character and faction as having a perfectly reasonable view of the huge mess they are all in.

I'm somewhat surprised to see the FBI having any knowledge of the CIA's targeting of three generals in Moscow, but the show seems to portray the American agencies as teo different departments of the same entity. Like a sales department and an IT team, they both are told of the company victories at the big staff meetings, right? At any rate, we lose General Zhukov, who does more in this episode's flashbacks than he ever did in the series up to this point. He's a character designed for exposition and a late-in-the-season plot development, so seeing him go was no surprise.

But back to the lack of suburban bliss in Virginia. Sandra Beeman and Elizabeth are hitting the town, and the perpetually spaced out or absent FBI agent's wife spills her guts at the drop of one Harvey Wallbanger. Sandra is a good person, who is under an unnatural amount of stress for someone who never signed on to be involved in the secret clandestine war. She finally is at her breaking point when she has the temerity to call FBI headquarters and ask after her wayward Stan. Just as with the Jennings marriage, the problem is less that Stan is clearly cheating on Sandra, and more that he refuses to communicate with her in any way, shape, or form. We know the insane places and stress the job takes him, but from her perspective, he's just an empty vessel because that's all he's shown her since coming back from his mysterious undercover work.

Evidently, such US federal law enforcement work breeds a level of degenerate ruthlessness. From the perspective of the KGB, the CIA are a disgusting brute squad, gestapo with federal credentials. The Soviet Union decides to withdraw from battle and let General Zhukov's death go unanswered. I'm not terribly surprised, since all of the casualties on the American side were accidents, failures to prevent escalation, and freak happenstances. From their perspective, things are entirely out of their control, and that's not smart. But Claudia is palpably pissed. She aims Elizabeth at Robinson, ostensibly because she also wanted revenge for Zhukov's death (apparently they were something of an item).

But what it really looks like is that Claudia is testing Team Jennings. To what end? Well, would Philip go along with an unsanctioned snatch and execution if his wife asked it of him? Would true believer Elizabeth violate orders so spectacularly if a personal vendetta took precedent? Would they be smart enough to figure out that Claudia gave Robinson's name and title to them on purpose? Claudia insists that everything she's doing is to support her operatives, and I think in her own sick way she's serious. She thinks that to best help them she has to have intimate control over their thoughts and actions, and answering all those questions is an efficient way to assume that control. It's a really twisted perspective, but you can see the logic to it.

-Nina gets her first assignment, and an office, and the distinction of being a "senior luitenant" in the big leagues. Pretty soon, it's going to look better on the home team than it does working for the opposition.

-"That's how capitalism works," according to Philip, "You make something, and then you sell it." He doesn't seem to find that concept particularly evil or backwards, the way Elizabeth might.

-Philip hasn't gotten the hang of being "fun absentee dad" and the kids are resigned to nature shows and hotel vending machines, along with the odd public urination. Beauty.

-People keep bringing beer to Philip's crappy hotel room, and they can keep it.