Did you know that "Take your child to work Day" constitutes boxes of my favorite donuts be distributed by my boss? I know now. So, twice in one week I avoided eating any donuts. Sometimes that's all it takes, or so it feels. I didn't avoid eating a tremendous burrito, with chips and guacamole. But you know what? That burrito probably had fewer calories than a maple bar with bacon on it. And it even had these great things in it, whaddyacall 'em? Vegetables.

Surprisingly, yesterday was a really decent day of exercise for me. On the hottest day of the year so far, I decided to supplement my standard gym session by doing a bit of walking. I was in Portland for an appearance by Stephen Tobolowsky, and rather than take a ridiculous public transit route that involved two different bus connections in addition to the train, I said screw it and decided to walk. I walked three miles. The weather was uncharacteristically pleasant (it has since gone back to a consistent Oregon drizzle), and I had a good audiobook in my ear. I want to do this again. I want to ride the train into downtown and just go for a walk and discover something. A new place to find some of the various things I collect, a really good meal that cannot be replicated, or maybe try one of the great museums.

I didn't anticipate that after a month or so of exercising on the regular that I would have more energy. I figured that assigning myself gym time, new healthy recipes, and lengthy posts here about television would be enough to kill me. And if it didn't, my job, kids, and mental illness would probably be enough to finish the job. Death by exhaustion. But then I took some hindsight, and remembered that I was already on a constant cycle of exhaustion. Even when I was sitting on a couch, having just slept for nine hours, I was done with everything. I don't know if it's that my body got a swift kick in the ass and remembered what real exertion was like, and adjusted accordingly, or maybe I just needed to provide myself with more structure so that I didn't always feel like I was drowning.

Speaking of structure, I've also discovered something else. I'm an absolute slob by nature. My desk is littered with irrelevant garbage and strewn papers, and my apartment is in constant need of cleaning, even though I spend relatively little time dirtying it up and almost all of my weekend trying to get it back into shape. But I have discovered that I love to organize things. It's a meditation for me. I like to put things in their proper place, and I get a little hit of pleasant chemicals in my brain when I finish such a task. But it has to be something I care about having in order. Dishes? I'm unconcerned. Not sure why, but I struggle to do the dishes. But my commemoratives? My comic books, collectibles, DVDs, and even new groceries that need to be put away in the pantry? I enjoy that. I have even...yeesh, get this...I'm toying with an idea for a novel, and I've started an entire new blog in order to organize my notes and drafts. It's all been set to private, but every time I have a new note, I just make a new post, and there it is. Every time I get to a new draft, it'll be a separate page on the blog. I'll never have to hunt for the proper document file (which all have the same damn title because, as I mentioned, I'm a slob), I'll never need to clean it all up. When I'm ready to transfer things into a document, I'll just delete the blog. No fuss.

Anyway, I was excited about that and wanted to tell anyone who might actually read this section of Crossing the Stream. This concludes my stream-of-consciousness, let's get to the stream of video instead. 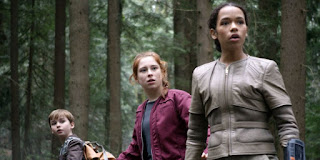 Now that the Jupiter 2 has a proper landing zone, and danger has retreated, the Robinsons concern themselves this episode with messages, and with the realization that they are further from Earth than any human ever has been. In the darkness of their new uncharted isle in the cosmos, each survivor has to decide if they will look forward with hope, or turn back to gaze at what was left behind.

It all starts with John suggesting that he, Maureen, and Judy head toward the other survivors that they've been able to hear on the comms. While they are gone, Will and Penny are charged with deploying the Jupiter's protocols for transforming into a premanufactured home. The resulting promotional video for Alpha Centauri's colony that plays on the ship's computer feels so transparently preposterous, but effective. Penny and Will and even Dr. Smith can't help but beam at the well-defined abs and wide open fields of green that await them on their new home. Dr. Smith might be a sociopath, but she still wants her spot in the new world.

The impromptu Lascaux scene, in which Penny and her siblings sign a message stating simply "The Robinsons were here," as homage to the first known cave paintings in history, shows that the Robinson kids are past the survival portion of their ordeal and ready to move forward as the astronauts they are. While the entire family discusses future living arrangements on Alpha Centauri, the kids don't even so much as mention Earth in the episode. Their half of the episode is dominated by aesthetic wonders of this Planet X they are on. Again, even Dr. Smith's lethal cynicism melts once she catches sight of the beefed up alien version of aurora borealis.

Meanwhile Maureen and John have brought their marriage-ending quarrel to Planet X and, with a bottle of Don West's contraband booze, try to air their grievances away from the children. Not so ready to move forward, they look into the past where a fateful letter from the military metastisized into the fulcrum for their relationship. Messages can do a lot of damage. For instance, Vijay, teen survivor and son to the Alpha Centauri colonial representative, has his own important envelope held hostage when he considers telling his father and his group about the Robinsons and their new Robot friend.


Equall costly is the decision of Don West, who survived the diamond hurricane along with the random chicken he's kept since landing on Planet X. As a matter of fact, they both live because the chicken, now named Debbie, has a tracker on her ankle. That's lucky, but it's also a nice one-line answer to how Don found his way to the Jupiter 11. The rakish mechanic is revealed to be a whiskey smuggler, putting him together with all the successful operations of Han Solo style scoundrels that have come before him. West's fateful choice of hiding spot for his stash involves him leaving the auxiliry comm system behind on Earth. Even though it turns out to be irrelevant, this is a clear indictment of most of the adult survivors, and their bleeding together of the old world and this new one.

-Will's earnest defense of his Robot, and John's continued skepticism, is going to drive the wedge further between father and son.

-The 3D-printed gun that Robot somehow made is now in the hands of Dr. Smith, which feels like it is the endgame of that plot crumb, but what happens when the gun is discovered on her by John or Maureen?

-Dr. Smith's ultimate plan is to drive a wedge between Will and the Robot, hoping that the machine's childlike loyalties could be transferred to her before she's exposed.