I really am over this whole "hump day" thing people like to do on Wednesdays. I know, it's just a cute little piece of prefabricated small talk for the office, and what an insufferable grouch I am to go after it, but...just stop. Okay, Dottie? Herb? Just stop using the word "hump" altogether, unless we're talking about Igor. Wednesday is not the difficult day of every week for me. That honor goes to Thursdays, for some reason.

Well, it finally happened. I achieved a rubber feeling in my legs, along with a full-on "I sat on my foot" numbness in one foot while hitting the elliptical. I didn't mind these sensations at all, actually. Other than my slightly perilous climb down the stairs to my car, it wasn't any inconvenience. Besides, I was too wrapped up in the "Altered Carbon" episodes to care too much about my physical state. Oh, what a smart decision this was, to take on a densely built sci-fi show that would distract me completely from how much I loathe exercise. This is the exact effect I was going for when I started this wacky scheme. Now I just have to line up 90 more days worth of programming that fits into my personal wheelhouse as well as this does.

Hmm. That could become a problem.

While the exercise front is functioning just fine, I did have a bit of a failure in the kitchen to keep me humble. I didn't know this, mostly because I had never tried before, but...brown rice is just terrible. Not only the taste, but the consistency bugs me. And when trying to mix it together with some healthy proteins like the beans I couldn't quite cook properly, I ended up with a large flavorless mass that could only be appetizing when smothered in hot sauce. Good thing I favor hot sauces with less sugar and salt than the average. I also tried to choke this unholy concoction with as much cumin and cayenne as the Geneva convention allows. But hey, you can't save them all, Martin Brodeur.

I've also been having a bit of a thought regarding juice bars, like Jamba Juice, et cetera. Is that really as healthy as it's advertised? Seems like a ton of sugar in one of those things, but I suppose if that was your primary sugar fix for the day, there are worse ways to get it. I think part of me just misses the ritual of stopping at a 7-11 or a coffee shack for a little treat. It's like when someone quits smoking, and really the thing they miss the most is the chance to leave a room, go outside, and catch a few minutes to themselves. You know what I'm talking about?

Anyways...I smell quiche somewhere. Someone around me, in the general vicinity, is sleeping on some quiche, and I have to get back to you in a second. I just want a better look at it, is all. 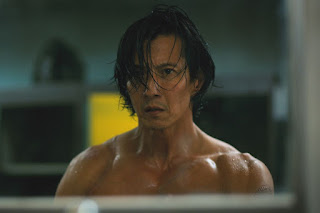 You know what? I think I'm about to give up on trying to find a theme or subtext to a lot of these episodes beyond what I've found already. Takeshi Kovacs, upon hearing in detail about the life of Elias Ryker--the former owner of his current body, a cop, and Ortega's boyfriend--gives a lot of halting narration about truth, and how truth is not about cold hard facts, but power on a personal level. I don't know how that is supposed to connect to the things that happen in this episode, but I did find the plot lacking in depth as well.

"Altered Carbon," for all the genuine novelty I find in it, is still produced as one of those daring shows that needs to have a requisite amount of sexy content. So, we have to take an extended break so that Kovacs and Ortega can instantly dive into each other, despite all the character reasons why that shouldn't happen. I'm not offended by nudity, but I'm offended by an episode's transparency when it looks like Martha Higareda (Ortega) was obviously getting the entire extent of her nudity contract out of the way all at once. Incidentally, does everyone on this show take seven showers a day, just to brood?

Another haphazard piece of plot that seems to be rushing to be finished is the Bancroft family and the much more Agatha Christie style mystery. Miriam, the closest thing to a femme fatale that the show has, starts suddenly trying to buy Kovacs with promises of an island paradise full of multi-sleeved sexcapades. That's...weird, especially how she suddenly is calling him "Takeshi-san" with all the grace of an American tourist.

Laurens Bancroft, meanwhile, comes closest to the thesis statement about truth. The facts are that his visits to the "Old City" for philanthropy are mere performances, wherein he is infected and his sleeve dies painfully. Kovacs finds it disgusting that a wealthy, immortal man would go to the most hopeless people left in existence to cosplay hardship. But the actual truth, the examination of Bancroft's personal truth, is that he is doing it out of solidarity. Again, not sure what that means, exactly, but it's curious.

Samir Abboud, Ortega's loyal and forthright partner, holds a similar personal truth. Though she is operating off the books and getting involved with Kovacs, endangering everyone's careers and lives, it's Abboud who sticks his neck out and proclaims that he'll kill Kovacs if his partner is hurt. Abboud is too good a man for his surroundings. In the instant I realized that, I knew his time with us was limited. And so, it's he who literally sticks his neck out and dies in the elevator.

Let's talk about that absolutely brutal, Bourne Ultimatum inspired brawl in the elevator. It transcends the excessive handheld shaky cinematography with the crisp choreography and liberal use of squibs and blood effects. Bless someone on the crew who insisted on actual, physical blood instead of CGI splatter. It actually got me squirming with how painful Ortega's wounds seemed.

Kovacs and his allies don't get terribly far in their concurrent quests, but we do learn a lot of the narrative's important details and connections. As it turns out, the Henchy case hangs on whether or not her Neo-Catholic coding was faked or not...if it was faked, it's legal for Ortega to boot her up and ask about her murder, which might lead to Ryker's exoneration and maybe Bancroft's involvement.

Meanwhile, we meet Carnage, another enhancd nutcase, who has an expensive recreation of Kovacs' old body. So...we've finally come to something I can't suspend disbelief for. I'm sure he'll be able to cast back into his old skin when the time is right. I hope we don't lose Kinnaman though. He's starting to resemble the calm cool of the Carradine family in various projects.

This episode was a big backslide in quality, mostly because it started to feel like a procedural television show, which is not what this story needs. Things are telegraphed, washed over, and people are holding the idiot ball.

-Apparently you have to pay a mortgage on your sleeve? Is that just when you buy an upgrade, or does that count for your natural body as well?

-The title of the series is given by Dimi of all people, spun into the same neo-Nazi sleeve borrowed for Abuelita:

"Where is the voice that said altered carbon would free us from the cells of our flesh? The visions that said we would be angels. Instead, we became hungry for things that reality could no longer offer. The lines have blurred."

-Abboud was Muslim, but apparently was allowed to be stacked. It didn't help.

"Man with My Face"

The healthcare system is the latest real world issue to be skewered by the Protectorate nation of the future. Ortega is essentially sentenced to death until the Bancrofts' unlimited tab coded to Kovacs' skin pays for her procedures, including amputation and robotic replacement of the entire arm savaged by the Ghostwalker. Before this sad prediction can get too heavy-handed, we're catching up with the assassin himself and Dimi, who who are meeting up with yet another shadowy villain who seems to know something about Kovacs.

So, is this the patented Netflix gamechanger episode, where the "big bad" is deposed by the real supreme villain who is far less interesting and also connected to the hero in some way? It wasn't a great look for "Luke Cage" either.

As easily as it seemed that the Envoy and the cop solved the murder of Laurens Bancroft in "The Wrong Man," it turns out Isaac Bancroft is a dead end. We know, because Kovacs tells us "Isaac was a dead end." How very fortunate that this is a hardboiled type of story where all of the plots are connected, and somehow Samir Abboud's real-death and Ortega's maiming in service to jailbreaking Dimi is definitely connected to the Bancroft murder...by way of...I'm not quite sure, actually. It's fine, none of this really does much of anything except set us up for one of the most extensive fight scenes of the series to now. It's positively bonkers, from Dimi spun up into a clone of Kovacs' previous body, Ortega's super-robot-arm, or the giant horned orc men bodyslamming everyone around. And just when you think it's as crazy as possible, a ninja swings through, slicing up everyone.

Rei Kovacs, up until this point, has been entirely silent, a background player in the flashbacks to Takeshi's Envoy training and relationship with the freedom fighter (re: terrorist?) Quell. Now, little sister has just become either the most dangerous foe yet, or the promise of some answers. At this point, I'm convinced that the mysterious boss character behind the Ghostwalker and Dimi is none other than Quell herself. Boy, don't I sound like a rabid fan, all of a sudden? This episode was nice and goofy without being too goofy, and it handled some of the ongoing threads from the previous episode unexpectedly. I didn't expect Dimi to end up in the Envoy's old body, or the police captain's anemic confession.

-Carnage the FightDome ringmaster is working for this new villain, and his arena is where Bancroft beat the hell out of his son. So, at some point the rich family's mystery will tie in to this new mystery surrounding Kovacs and his past, right?

-Envoy Training Alert: Kovacs is able to change his appearance in VR spaces at will, because reasons.

-Dimi is finally kaput for good, and that somehow makes me kind of sad, because he was a classic insane street-level villain, which this series is sort of lacking now.

-Blink and you'll miss Poe and Elliot arguing over poor Lizzie's therapy. If the AI dude manages to rehabilitate her, she might have the missing piece of the puzzle: Mary Lou Henchy's death and how it connects to the Bancroft murder and the frame-up on Ryker.