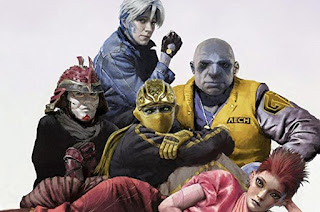 I'll never question Steven Spielberg's ability to take a book with serious problems and turn it into a thrilling piece of popcorn cinema. I mean, Jaws was a terrible novel and it's also one of the best films of the last half-century. But the director had his work cut out for him with Ready Player One, a hero's journey lousy with nods to a very particular era of pop culture that he himself helped craft. Many were wondering if even the man himself could make it work.

He made it work. For me at least.

I had a lot of fun with the film as a visual spectacle. Between the gigantic frenetic race sequence, using an uncanny recreation of his good friend Stanley Kubrick's greatest visual triumph, and a third act that trades time between an effects-heavy battle royale between every video game or film character ever created and a tense stealth infiltration in the real world...come on. You can say what you will about the script, about the source material, about the themes or motifs being used, but you can't try to tell me Spielberg didn't show his best command of spacing, framing, and camera movement to make it all pop. It's worth seeing, just to see him craft a film that leans heavily into his older trademarks of gee-whiz wonder and excitement. We see precious little of it anymore. There's a purpose to every shot in the extended race and battles. The color saturation in the real world setting highlights the candy-coated world of OASIS, the virtual reality multiverse where everyone lives life in 2045. It's a fully realized representation of a world created purely from imagination...even if it wasn't the author's actual imagination being used.

I will chastise the craftwork of the film in pacing, as we spend probably the first 40 minutes or so trapped in expository dialogue and narration. Even with the visual storytelling of following young Wade through the trailer "stacks" of impoverished Columbus (and all the slices of virtual life it affords us) we do still have to rely on Ty Sheridan's voiceover to get any of the in-world jargon or the larger premise to stick. And the final act drags slightly thanks to the mixture of stakes at play, with a life-or-death game of cat and mouse in the real world, the epic battle in the virtual world, and even an emotional epiphany happening in a pocket level involving the dead game designer. Sometimes it's hard to move fluidly from one to the other.

Part of the problem there is that all of the language of OASIS all reeks of first draft attempts. The evil corporation is called Innovative Online Industries. The gamers who hunt endlessly for the golden easter egg that will lead them to fame and fortune are called "gunters" (short for egg hunters). You have to place a larger amount of trust in the film than you would if it didn't sound like an elaborately sketched middle school creative writing assignment. I haven't read the novel, but it sure seems like the story was written by a white man of a certain age. The various pop culture pushpins all center around a very particular taste in music, film, and games from a very particular era. Isn't it odd that teens in 2045 are so laser-focused on not just 1980s entertainment, but the exact 1980s entertainment of the author's preference? There is no reference to the golden age of hip-hop, only Duran Duran. Extreme excitement over a Buckaroo Bonzai cosplay, but nary an Axel Foley Detroit Lions jacket in sight. And the pop culture is more put on display for assumed appreciation, rather than wielded with fluency or understanding. It's just enough that we see, recognize, and approve of something like the motorcycle from Akira or the Battletoads racing into a fight alongside Jason Vorhees. There isn't even an application of geeky film literacy like, say, the "slasher film rules" deployed in the Scream franchise.

But honestly, the references are references. If you enjoy nostalgia, I'm not going to begrudge you the heavenly feast of it this movie serves. The real problem with it is that the nostalgia (which, lest I repeat myself, cannot really be nostalgia when it's stuff from 40 years before our heroes were even born) is used in place of character traits or development. The evil conglomerate chairman Sorrento is not called out as the villain for his desire to take over the planet's biggest marketplace/utility/communications/job site and run it as a weird Orwellian monopoly...he's called out for being a fake geek, one who cannot randomly recall lines of dialogue from Evil Dead 2, or get to a kill-screen on Galaga. "A fanboy knows a hater," and much stock is put into how good one can fanboy. Which is weird, especially when all of the pop culture on display is such surface-level stuff that your mom or grandmother could probably keep up.

It would be an amazing feat of filmmaking if the script were to comment at all on this use of nostalgia-as-currency, and it does make some attempts with the backstory of the giant virtual world's creator. He valued pop culture over human connection and regretted it to the point of hiding the lesson within his posthumous Willy Wonka contest, but ultimately the lesson is delivered not as "Hey, maybe life and human connection are more than just entertainment," and more like "Hey, your pop-culture obsessed life would be a lot more fun playing co-op!"

Ty Sheridan does his best with a character who is not exactly equal parts lovable loser and Luke Skywalker, and Olivia Cooke in spots is lapping him as Artemis. Neither character is really developed enough, but they inject a lot of life into their performances, even when playing in-game avatars. Lena Waithe is a highlight as the sweet-natured sidekick Aech, although the very fact that she is the designated sidekick rather than the leader is glaring. Ben Mendelsohn is settling in to his gig as the new arch-villain of choice in Hollywood, and he's rather enjoyable chewing the scenery. Really, the cast is nothing but promising and they deliver exactly what is demanded of them, knowing full well that the effects and the nostalgia were the starring characters.

I liked it. I had fun. It did its job, and looked good doing so. But I doubt by 2045 anyone will so lovingly reference this film as an easter egg. There are some who will point to this as a nadir in art, where simple animal recognition of the familiar is given unearned value without any deeper meaning or commentary on society, but I'd counter that sometimes the glitzy blockbuster is just a glitzy blockbuster, and this one at least has the conviction to present itself as a well-crafted one and nothing more.