Big moments of triumph always seem to be followed by a step backward in my experience. When you're on top of the world, there's usually something to drag you back down a few feet. This week, it was a lovely illness that curtailed my ability to participate in my one-man experiment. Really, even today going into the gym was ill-advised. But I'm here.

One of these days, if I manage to lose a hundred pounds doing this, I'll have to get "BUT I'M HERE" tattooed across my forehead.

At any rate, Wednesday was a day of cold symptoms, then Thursday was a day of fever and sore joints and immobility. Fun. Grand fun. I joined the land of the living again at some point before 5:00 am this morning. I have to say, running nose and sore throat are not great gym buddies. I did a fraction of my typical speed and distance, and could not get my heart rate to get above a certain level that the machine recommends for fat burning. It didn't matter, I didn't feel like it. Today was a great triumph, from a certain point of view, in that I felt like crap and I didn't feel like sweating into my gym sweatshirt and pumping my legs any faster than a leisurely stroll, and yet I did just that. You know, regarding personal bodily maintenance at least, I just may be growing up.

So, yeah. I took a day off from work and spent most of it sleeping and drinking water. But I ate some calories, too. A tuna sandwich? Apples with peanut butter? Probably an entire cucumber? And finally, my greatest shame, probably three bowls of sugared cereal. All within about three hours. Then I went right back to sleep. Funny how that works. I figured my body was looking for any excuse to refuel. It was a time of great weakness. And yet, here I am today, an additional two pounds down from Tuesday's check-in.

It feels pretty good to have results, even if they are less tangible to me than to everyone else. So, when I have a day where I'm feeling like crap, and all the Froot Loops on the face of the Earth won't change that, I can always find solace in the results. 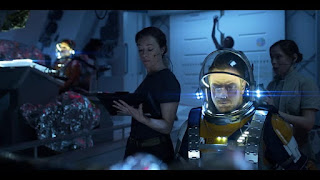 So, when I was watching "Trajectory" today, I was under the impressing it was the season finale, and it kind of felt like one through most of its run time. Then, in the dark of the night sky on what I've come to call Planet X, the Jupiter 4 suddenly exploded in a muted, distant flare. Credits. And for a split second, I thought this show had just ended the first (and always possibly the only) season on the most dark of cliffhangers with Don West and John Robinson dying at the zero hour, with only twenty-four hours before the rest of the colony survivors are abandoned by the Resolute. How ballsy and unexpected!

Then Netflix helpfully offered to play the "NEXT EPISODE" without my consent, as it does, and I knew that I had somehow tricked myself into thinking there were only eight episodes instead of ten. Did this mistake lend undue gravity to the episode from my perspective? Possibly. But it's still a very effective cliffhanger, and aborting Netflix from diving into Episode 9 was a tougher decision because of it.

What helped seal the illusion that I inadvertantly created for myself was that all the dangling plot threads up to this point were finally being sewn up. For starters, John and Maureen Robinson appear to be reconciling their marriage completely. They really are a lot more fun to watch when they are happy and like each other, but the sweet by and by is short lived when Victor Dhar's Jupiter ship powers up and attempts to lift off.

It's interesting to note that when being confronted, Victor's first response is to tell Maureen that her daughter is somehow responsible for the loss of fuel, which...has very little to do with his decision to flee. The takeoff attempt, with John jumping aboard, fighting Victor's designated toady Peter, and shutting down the engines, is a decent bit of action to start the episode even if it feels like the politician is being deliberately obtuse about his craft's capability. Maureen is convinced that they won't make it out of the atmosphere, and yet Victor is unfazed. We don't really know a whole lot about the man, but he's never displayed such disregard for facts. His only defense for the act seems to be "Well, you neglected to tell everyone about the black hole, so...why should I trust your word on aeronautics?" Again, this is what they call "whataboutism" and it has little to do with his actions. I'm starting to think Victor might be a really bad leader, y'all.

Another plot point reaching its zenith is the question of John and Will. They have grown together nicely over the course of the show, with mutual respect for each other's abilities in the survival situation. Now that Will finally has his father, however, there's yet another dangerous assignment calling the Navy SEAL away from their new relationship. Will's refusal to sign off on John's piloting assignment makes perfect sense when he connects the idea to Robot's demise. It's good when characters are as perceptive as the writers who create them, and it's something this show has kept that standard consistently.

Similarly perceptive is the dynamic of Judy acting as Jiminy Cricket to Don West, Scoundrel Extraordinaire. The mechanic and smuggler finally giving in to his altruism when he agrees to copilot with John is a great capper to the reimagined version of the character. Don himself hashes out to the audiences that every time he has a crisis of morality, he ends up getting stiffed when he picks the righteous path. That's also a moment of rare perception from a television character, but it also provides plenty of fun at his expense. Ignacio Serricchio's comedic timing and self-depricating swagger deserve far more time on this show that he gets, and now that the character has finally become a full-fledged member of the Robinson crew, I want to learn more about him.

And finally, there's Dr. Smith, whose true colors come out at exactly the worst time. Maureen's capture of Dr. Smith is refreshing. Instead of having a mom panic out of mom instinct, she is level-headed and cunning right to the point when she locks the door on her. Meanwhile, though Smith manages to cajole Will into letting her free and she immediately tapes and ties him up, it makes perfect sense that even a genius of an eleven year old would fall for such a ruse with the right emotional pressure applied. Say, his absentee father possibly flying to his doom just after his faithful Robot pal took a half-gainer off a cliff.

Smith, or rather June Harris, even after being physically caught, keeps spinning the truth to her own purposes without actually lying. I really liked how her pitch to John included that his being the only one who can pilot the ship is damned convenient. Good lampshading by the writers to include that, because it really is a wonky plot point that we all just have to deal with.

Even though there's a lack of sillier elements to keep it fresh, like a robot fight or giant fuel-slurping space slugs, it's certainly an episode worth a watch. As the season begins to wind down, it's gratifying to see the small stuff lurch out of the recesses of exposition and become the featured player.

-Maureen and Will devising the flight plan via Mercury-era NASA nerdery hit me right where I live. I love that kind of stuff, and it finally finds a parallel between the slick futurism of the show and the whole history of spaceflight depicted in the opening credits.

-I like that Hiroki Watanabe makes the distinction that the planet is not dying, just becoming uninhabitable. There is a difference, and it's one of my pet peeves when the false equivalency is constantly made.

-After an endless supply of cool jackets and flashy spacesuits, this episode oddly shifted the costume department toward utility vests and cargo shorts. It's as if summer broke out during filming and no one had any other cost-effective ideas.

-Poor Penny's breakup scene with Vijay manages to have the banality of truth. Teen romances typically fizzle out with a lack of fanfare and some character attacks, even if one participant tries to play it off like nothing ever occurred.