It's a sad day when my new regularity of gym visits threatens to disrupt my life in a permenant fashion, but that's...well, that's a highly exaggerated take on what happened today. I was nearly done with my elliptical time when I reached up to adjust the device I was watching. And then my wedding ring slipped right off and disappeared.

Having already lost my right hand's ring under similar damp-handed circumstances (it's under my washer/dryer, I'm positive), I think we can conclude that I've lost some mass in my fingers. Less than a millimeter of chub burns away, and suddenly a symbol of my undying devotion to Rosely is trapped in a strange Bermuda Triangle that exists between the control box and the hollow support beam of the machine. Keeping it company were a century-old hair tie and a post-it note folded in half with someone's password written on it.

Yeah, this sucked. But with a little ingenuity that involved paperclips bent into fishhooks, scotch tape, and a thin ruler, a coworker and I were able to construct an effective harpoon. I hooked the ring, and he landed it. So, yeah. I got my ring back, and I know the perfect hiding place for something tiny, like a key or microfilm. If you're interested.

That was fun. I just felt a cute story about that was a good change of pace from the usual carping about choosing not to eat bacon. 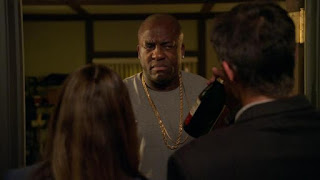 This episode serves as the precipice for a possible leap down a rabbit hole. There's a Serbian grandmother, a mysterious internet occultist, and a rare book that implies a cure for Sheila's malady/curse. It's all a bit too much, and it puts the potential metaphors of the show into the background in favor of some half-baked lore. Then we're dealing with a potential zombie outbreak with Loki by the end. The whimsy of getting away with a tame zombie narrative is overtaking the exceptional, confident comedy.

The self-seriousness continues when Abby immediately finds out about Porsche Guy, thanks to Joel's loose lips about his old motorcycle. And because this is this show, she's less horrified by the dead body as she is by her parents lying to her about it. Finally, the Abby portion of the show gives actress Liv Hewson something more to chew on, besides a very skillful deadpan delivery of her character's thick snark. The final scene between her and Sheila with the bloody briefcase hits particularly close to home for anyone who grew up with a healthy dose of white lies and secrets.

I said the other day that Dan would have to deepen as a character, but instead we get the entire household thrown into the spotlight, with Eric's mom's affair being the worst kept secret ever, and Dan smelling blood in the water over at the Hammond house. Dan's sardonic way of cajoling Joel into being his "friend" is actually a nice, subtle look at the obsessed Deputy's inner monologue. He could phrase his blackmail in any way he wants, but he chooses for someone he thinks is capable of murdering and dismembering a person to be his friend, because he has none. That might have something to do with his toxic masculinity covering for his near-adolescent levels of awkward behavior. Eric also gets his best scene so far. His quick turnaround from a failed kiss with Abby to "a rhetorical exercise" to prove his point about her parents lying to protect her...it's the most we've seen out of this character that paints him as the clever, off-kilter young man he's supposed to be. It doesn't hurt that he follows this up immediately with his story about peeing in his Cowardly Lion costume in third grade, and how it could be seen as a very strong acting choice. That kind of won the episode for me.

Dan's specific demands to kill a repeat offender who won't stay in prison, Loki, is the unexpected direction for this to go. From what we've seen of Dan, he's a perceptive guy who can't turn off his cop persona, so when he laughs off Joel and Rick's smoke session, doesn't arrest Joel for murder, and then demands Loki's assassination, it's a strong comedic seed. The fight in Loki's apartment is nothing if not the wacky-as-hell bloom of it. The stunt doubles for Drew Barrymore being tossed around like a ragdoll by guest star Deobia Oparei you can keep, but the wide shots of Joel flailing around trying to don his plastic pants with the two fighting in the background sure captures the ridiculous circumstance properly.

Joel's sense of responsibility always seems to overtake his better judgment. In the case of Dan's task for him, Sheila even gives him the out and assures him that she can murder Dan's evil drug dealer on her own. But "what kind of a man would I be if I sent you alone?" seems like an empty excuse. When Loki squares off with Joel it reinforces that he's simply not prepared for the amount of commitment he takes on in this new era of his marriage.

I bet that changes when he meets a new, more impulsive Loki.

-Joel upon hearing Dan's rancid kinda-Borat riff, "What reaction were you hoping for?"

-A trend of sudden advances in plot progression seeps into a lot of the episode, including Dan's blackmail scenario that we don't even see. Surely Dan himself could have delivered that information instead of just some non-sequitor joke about a sandwich making his balls tingle.

-Hey, am I the only one who keeps bristling at Sheila's assurances that their sex life has improved, like a thousand percent, while Joel never seems to confirm or deny this? I feel like that's building toward something.

-"I wanted an honest cookie, Mom, and you gave me a nose full of hypocrisy!"