I got a rejection email on the job that I interviewed for, and it sent me on a quest to immediately and thoroughly hide how much anger and frustration I had. I drank two beers and ate a lot. I continued to eat lots of chocolate and a few meals that were fast food. I didn't handle it well, largely because this is the third job in the last six months or so that I've lost out on. I've since started to describe myself as "aggressively mediocre" whenever I talk about it. The same could be applied to my weight loss. Whoo-hoo, I've lost 45 pounds...and I should probably lose 45 more! Aggressively mediocre. And really bad at self-control, especially when I have the best excuse in the land to go hog-wild. I got bad news, so I don't give a damn. My government is a three-ring circus racing to elevate monsters to the highest powers possible, so today I don't give a damn. My neck has been killing me for two days straight, nothing seems to help, and I don't give a damn. It's a better excuse than any I've ever adopted, because how do you argue with it in the moment?

Workouts have been rough. I haven't lost any weight this week, and every stationary bike ride has been a trial of will. I'm still here, as I always say, but right now I really don't want to be here. I want to hide. I want to seal myself off and just sit supine on a bed of sausages and cookies and stay there until anything...just, like, fucking anything...gets better. It's really hard to balance the physical health stuff with the mental health stuff, because everyone will tell you "Oh, take care of yourself. Self-care is important. If you need a break, that's what you need." But that usually is a trendy way of saying it's okay to watch garbage TV and eat Taco Bell once in a while, when your brain has just had it with stuff. I don't know how to pull out of that dive once I'm in it, though. Once I've justified one dalliance, I've justified it all as a lifestyle. And sometimes "I don't give a damn" is all the justification my wounded pride (and neck) needs.

Being a fat kid past the age of 30 is a lot like what they used to call an "out-of-body experience." You know you shouldn't eat that, you know you need to cut your portions in half, you know the terrible ingredients are just fueling your depression even further, and you see in real-time yourself making every mistake, but there's no way to stop yourself. I've lived the last week in a fugue state, and even though I'm mad, and sad, and exhausted, and feeling isolated and scared, the thing I want most is just to get control of my attempts to cope. Because when I'm busy looking at the raging supernova of everything else, the coping behavior is what will put me in a grave.

This is a real bummer post, and I'm sorry if it brought you down. But this has been a bummer week, and feeling it hit you isn't all bad. It reminds you that you know the difference when things are going right and when they're going wrong. Plus, it's sugar-free and relatively low in carbs.

In order to cleanse the palate, let's take a step into a light comedy. 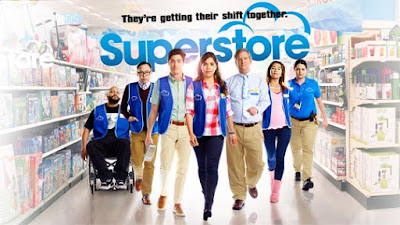 Workplace sitcoms have always had a soft spot in my heart. There are few things more relatable to a vast portion of network television viewers than a half-hour hangout show that takes place at a soul-sucking capitalist grind such as an office or retail business. And it's a setting that can be modified to fit almost any character or plot, and any conceivable workplace. We've had at least three shows take place (at least partially) at a radio station, and quite a few centered on a bar or restaurant. There was a period somewhere in the late 1990s where it seemed every single sitcom on the air took place at a magazine's editorial office. Then there's NBC's powerhouse of workplace humor, "The Office" and "Parks and Recreation" and, come to think of it, "30 Rock" is also a workplace comedy in part. These days, workplace comedies range so broadly, from a New York police precinct to the offices of the Vice President, that it's common for the show to escape its own premise and just become a big ensemble facsimile to "Friends" where no one really does any work, everyone is dating everyone, and they all miraculously stay employed and pay for their enormous Manhattan apartments or suburban homesteads.

Interestingly enough, there have been far fewer shows to depict minimum wage workers. I guess there's something to be said about television and escapism that whenever a show is centered on someone working in a big-box retail chain, they typically split their time between this rough labor and some outrageous and fantastical side job, like being an action hero super-spy or a literal grim reaper working for Satan. Shows that attempt a straightforward, salt-of-the-earth workplace setting are often cancelled within three seasons. That's why, when a friend recommended NBC's "Superstore" to me, I immediately confused it with the TBS sitcom "10 Items or Less" which I'm pretty sure was cancelled years ago now.

This is an extremely cute show. It's exactly the kind of show NBC has needed the last few years, with their block of unstoppable Must-See-TV comedy long gone and a few years there of listless, uninspired trash to replace it. "Superstore" is also, ultimately, a valuable asset for the network because it's relatively safe; it's one of the few half-hour comedies in the last three years that didn't have a ludicrous high-concept element, center on an aged former star's high-priced comeback, or was a full reboot of a past hit. It's just a show about people who work in a Wal-Mart lookalike and how they manage to get through the day without justifiably losing their minds. It's low-stakes, quick on plot escalation, and maintains a consistent joke ratio that makes it ideal for active viewing or background noise.

And once again, like "The Good Place," a reasonable approach to a television season (under twelve episodes instead of a bloated over-twenty) pushes the plot forward at a pace that can keep up with the comedy. Any other show would draw out the romantic tension between leads Jonah (Ben Feldman) and Amy (America Ferrera) and the pilot episode's closing credits tease that Amy has a husband and child at home. But with only eleven episodes, Justin Spitzer and Co. not only decide to drop the hammer on that within the first half of the season, they also introduce Amy's husband Adam in a fun and organic enough way that makes everything properly awkward.

I've always been an America Ferrera fan, and I'm glad she's graduated to an adult character who has the weight of responsibilities, regrets, and common sense. She's often the straight-man (is there a more updated term for that?), rolling her eyes or racing to stop whatever shenanigans her coworkers are getting into, and instead of being burdened with cheeseball pratfalls to convince us she's "adorkable," she has an acid tongue and an eye for other people in need of help. She's a great foil to Feldman's Jonah, whose character is less built on his background as his moment-by-moment foibles. Jonah is what internet shit-goblins refer to as a "soy boi," inasmuch as he's "woke" to a possibly performative level. He's a college-grad millennial white dude struggling to crawl out of a privilege bubble, which is a great way to present your male lead in a comedy focused on blue-collar workers in middle America. Feldman plays him with an earnest energy, but tempers it with a touch of unconscious snootiness that his new coworkers immediately pick up on and (thank goodness) admonish him for.

The rest of the cast sure feels like "the rest of the cast" on a workplace comedy. Requisite clueless boss Glenn is some strange amalgamation of Stephen Tobolowsky's folksy lunkhead routine and Jim Gaffigan's high-pitched creeper inner monologue, played with a lot of nervous gesticulation by Kids in the Hall and SNL veteran Mark McKinney. Tough, plainspoken Dina is essentially Dwight Schrute with a touch of Ron Swanson. I'm not sold on the character at all yet, since everything seems so prepackaged to make her the breakout character, a K-Mart Melissa McCarthy role. I am totally sold on the actress, Lauren Ash, though. She imbues this cartoon character with something that Dwight and Ron were always missing: she's plainspoken about everything including her emotions. Nico Santos does just fine as smarmy overachiever Mateo, even if he's quite one-note for this first season. I'm confident he'll develop into something special. And as open and obvious as Colton Dunn is as Garrett, the nihilistic shit-starter of the team, it's hard to be too critical with the character who frequently steals the episode with the sharpest jokes and is clearly having all the fun ever.

Episode formula is pretty even-keel, usually surrounding team dynamics in the face of some outrageous problem. A corporate snoop disguised as a secret shopper? A pizza party contest turning the staff feral in pursuit of sales? You see immediately where these are headed even before the cold open finishes, and...you know what? That's okay. Much like a department store chain or a fast food franchise, it's comforting to see the familiar directions and judge the show not on what formula they use, but how deftly they use it. Locking everyone into the store overnight for one episode was a great shortcut to some much-needed character development and relationships, even if it's completely preposterous and ignores the way retail stores function (where is the freight crew to do night stocking?). And though I really loathe "guy is confronted with the concept of menstruation and loses his damn mind" humor, it was purposefully executed and helped endear me to Jonah.

Look, it's a nice show. Incidents arise from circumstance, as the song goes, and while not much profound or breathtaking transcendence is involved, that's really not the kind of show this sets out to be. This show is down to earth, reliable, economical, and at the very most it might teach some folks to treat their local store clerks like real people more often. Can't complain about any of that.

The muzak and assorted family-friendly '80s pop featured in the store is pretty damn spot-on. There seem to be a lot of below-the-line designers and supervisors giving this show their absolute all, and I see them.

"Attention Cloud 9 shoppers, the store has been closed for twenty minutes, many of us would like to go home. So...if you're still in the store, you're being a dick. Don't be a dick!"

Cloud 9 stores carry Shasta brand soda pop, which might be the most shocking realism I've ever seen in a sitcom.

(In Dina's truck) "If you're hungry, there's a can of beans in the cup holder that's up for grabs."

Someone on the writing staff of this show might very well have worked for Wal-Mart, judging from the opening morning corporate chants, and the extremely real recurring gag about union-busting, spotting attempted unionization, and firing people just for saying the word "union."

How cheeky of NBC to air a show centered on the fictional Cloud 9 brand, which has previously popped up in "The Mindy Project" among other shows. Now if only we could get a rivalry with the local Buy More electronics store...

(Glenn's opening announcements) "So, while we haven't caught the raccoon yet, I do feel that we're starting to have a better understanding of his patterns."