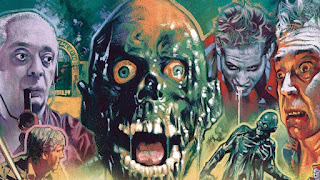 This movie holds a special place in my nerd heart: it was the first movie I watched very late at night for MonsterVision with Joe Bob Briggs. There are few things I remember as clearly or as fondly as some of the cannibalistic ghouls in this film wailing "live BRAINS!" and not being sure as a child if it was okay to laugh. At the time, I had no idea this was a comedic deconstruction of the modern zombie film. I just thought it was a really weird choice. Frankly, it was. There are few R-rated splatter flicks as unrepentant in their goofiness as this one.

The mid-'80s was a really strange time for the horror genre. It was like everything had peaked, and now the only suitable angle to make something fresh and new was from this one. To be sure, Return of the Living Dead is very much the Texas Chainsaw Massacre Part 2 of American zombie movies; while not the untouchable classic taught in film schools, it succeeds chiefly thanks to the completely functional horror production design being grafted onto the cheeky, self-deprecating lunacy of the script. The horror comes fast and moist, and in between that the folks in charge just opted to fill in the gaps with some wry dialogue and some gratuitous nudity rather than aiming for and missing genuine pathos. Surprisingly, its status as a cult classic is still well deserved and it holds up quite better than any other '80s horror-comedy hybrid.

Zombie effects are what they are. In the early days of Romero's popularization of the modern zombie lore, as little as grey makeup and a wonky shuffling of the feet were enough. But this film is in part a comedy of excess, and therefore required an inspiring amount of disgusting goo and spirited invention. Highlights include the ghoul face melting away while the opening credits play (an effect that never gets enough credit for establishing the tone of the film), as well as the full drippy "Tarman" zombie creature, covered almost entirely in a milkshake thickening additive once used to create "the Blob." Coupled with the absolutely sickening talking torso puppet spilling spinal fluid and shrieking, and the buckets of syrupy fake blood, and this makes for one of the classic "barf-bag movies" as Roger Ebert called them.

And while a young Linnea Quigley's naked dance atop a gravestone was surely a formative moment for a lot of young viewers, there's something hypnotically ridiculous about her return as an ethereal ghoul, still naked as a jaybird but now pasty grey with an army of brain-starved creeps flanking her warrior stride back into the movie. That's really the scene for me, where the film becomes a naughty type of Universal Studios stage show complete with fog machines (for, you know, ambiance) and the perfect musical sting to signal the vengeful return of a character who literally only exists to be naked. I don't know exactly how to explain why that makes me smile, to see the most obvious throwaway character--whose name is actually "Trash"--recycled into this much more interesting idea. Same actress, same nudity, same horrid red wig, and even the same endearingly cheesy song, but the new context was some kind of economical magic.

Dan O'Bannon, who co-wrote Alien and was the special effects supervisor on that classic as well as the famously never-made Dune adaptation from Alejandro Jodorowsky, crafts here as writer and director a purely functional script much like that first xenomorph outing. It's efficient, in that it gets us to some squelching zombie fun very quickly, but it isn't too brisk that it neglects a sharp opening sequence featuring James Karen riffing like a vaudeville pro just before giving us a tidy info-dump monologue with the flair and magnetism of Robert Shaw's famous USS Indianapolis speech from Jaws. We're introduced to a pack of miscreant punk rockers--just enough to remember each of them as much as necessary--then we get to see them eaten. And though the workman's functionality is present in the direction as well, every necessary element is dipped in sweetener to help it go down. Okay, we have to watch as a bunch of actors climb out of fake graves, and it's going to take a few minutes to show you all the little zombie gags. How about a fun pop soundtrack to pep that sequence up? Cool. As the night wears on, we have to come to those moments where the beleaguered survivors have to have heart-to-heart talks or plan their next escape while huddled together away from the windows. Boooooring. How about we cut outside to the zombies playing Wile E. Coyote games with the constant flow of paramedics and police showing up to investigate/be eaten? That's fun. This movie is just so much fun.

Again, I'm probably biased thanks to that memorable watch on television late one night in the 1990s. It was a beautiful experience, realizing that a movie can still be incredible and effective without being in any way classy or important. It's one of the first films that taught me the virtue of production value, that any manner of nonsense will be acceptable as long as it demonstrates a mastery of the craft and it has a satisfying payoff. This is a film loaded with payoffs, especially to a boy sneaking a scandalous viewing after midnight. I love Return of the Living Dead. It's a great silly little movie, and while it happens to embody completely the dismissive, reductive grandparent take on horror, it does it with no apology and a big grin, the true punk that it is.