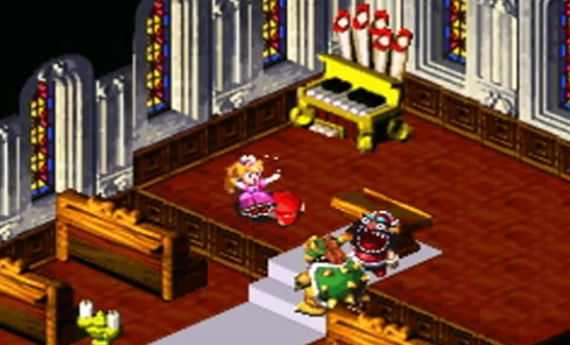 When we last left off, Mario and his crew of Mallow, Geno, and Bowser had made it to the top of Booster Tower. The climb up the tower brought back a handful of nostalgic memories and gave me a lot of good feelings, but that only gets heightened with what’s coming up.

Since we’ve reached the top of the tower, we can get a look at Princess Toadstool out on the balcony. The door though is sealed with a magic code word, and before we can bust it open, Booster and his cronies announce their entrance, prompting Mario to hide behind a series of curtains.

He there be a minigame! It’s fairly simple, Booster wants to do a dry run through his wedding as he’s completely unfamiliar with the concept and so will use some dolls to represent the primary cast. The group decides that he’ll need his Mario doll as well since Mario supposedly always shows up to ruin things for him (which is categorically not true and this is the first time Booster has ever met Mario beyond hearing Toadstool yell about Mario constantly).

Booster asks his three Snifits to grab his Mario doll, saying it’s probably behind the curtains. You’re able to move freely behind them and have to avoid being behind a curtain as it’s opened. The minigame is fairly simple and results in all three Snifits eventually getting involved. If you’re caught three times then you have to fight Booster, which I’ve done in the past but here I’m playing it as intended, so I avoid the battle. Once three of the four curtains are opened, Booster comes to open the final curtain with you behind it. Upon opening it, he proclaims “AH-HA!” and determines he’s found the Mario doll, mentioning that it’s above you on a shelf that he can’t reach.

The usual absurdity of the game shines through here as Booster is too focused on wanting to get the Mario doll that he completely ignores Mario himself, even after Mario jumps up to knock the doll off the shelf. In fact, Booster rewards your efforts with an item called the Amulet, a must-equip item since it boosts all stats except for speed and halves elemental damage.

Allow me a tangent here. Booster is very clearly Wario, or at least seems to be either based on Wario or was originally intended to be Wario. They both have big features with chompy teeth, they’re obsessed with base desires, have the same crazy eyes, and Booster’s signature item, the Amulet, has an item description that says it has a strong smell. I’m taking this to mean it’s potentially garlic, which is a Wario thing. Ergo, what is Booster’s connection to Wario? Fun to consider, but ultimately not important (or the most important question in gaming that MatPat has yet to delve into).

After getting his Mario doll, Booster determines it’s time to go, so he opens the door to the balcony to snag Toadstool and head to the church. It’s a cute little moment that the codeword to open the door is the same word you’ve named your save file, which is the only time it actually comes into play anywhere in the game.

In pursuing Booster to the balcony, you encounter Grate Guy and Knife Guy, a boss duo that can give you a lot of trouble if you’re underleveled. This is the classic duo boss fight where one is the physical attacker and one is the magic user, Knife Guy being the former and Grate Guy being the latter. If you take long enough in the fight, Knife Guy will hop on Grate Guy’s back and change the dynamic a bit. My levels are pretty beefy, so after dunking Knife Guy, Grate Guy falls quickly and we’re off to stop the wedding.

The next section includes another minigame on Booster Hill. Booster has Toadstool on his back as he’s running straight up the hill while you as Mario chase after. Barrels fall down and give you a boost if you jump on them, propelling you forward. Booster’s Snifit cronies run behind, sometimes grabbing their robes and snifling quickly toward you, allowing you to get a boost from jumping on their heads. If you can touch Toadstool, you’re rewarded with a Flower before being knocked back to default position. The more times you can reach Toadstool, the more Flowers you can get. In the past I’ve gotten more than a dozen Flowers here alone, but this time only six. Nothing crazy.

Reaching the top of the hill leads into Marrymore, a town that’s basically just a big church and a 5-star hotel. You can pay a hefty fee to stay in the hotel’s suite and gain a Flower Tab, or you can just head right on into the church segment, which shows that the characters of Raz and Raini have had their wedding interrupted by Booster and the Snifits.

For those who haven’t been talking to random NPCs, you might have missed this little side plot, but Raz and Raini are Toads first encountered in Mushroom Kingdom at the start of the game, mentioning that they’re engaged and plan to get married soon. Here we are at the wedding, getting a chance to set things right, though as is usual we only really help because it happens to align with our own interests.

The front door is locked, but you can sneak in through a hidden back entrance and get to the church from the basement kitchen. The Snifits have the doors shut tight, but one is stuck on the other side, demanding you time things just right to run at the door in unison with the Snifit to bust the door open. A second door is shut tight, necessitating the same thing again, this time with Bowser.

As soon as you slam through the doors into the main chapel, Toadstool is thrown back and her wedding gear is scattered, including a broach, a bouquet, her shoes, and a crown. A third and final minigame for this section begins with you having to run around and grab the items as quickly as possible. The faster you get all four items, the better the next scene plays out, though that’s all subjective. Either you get the items quickly (like I did for this playthrough) and Mario gets a kiss from Toadstool, or you take too long and Mario ends up getting a kiss from both Bowser and Booster.

With that concluded, things seem fine, right? Nope! The cake has arrived and the chefs are ticked off that all their hard work is going to waste, so they start a fight. This is actually a bit of a puzzle battle since you aren’t meant to fight the chefs, but rather the cake. Turns out the cake is alive, which sends the chefs away and begins the real battle.

The cake has five candles that you need to “blow out” by attacking it. You can typically snuff three candles a turn while the cake can relight one a turn. It’s not hard to end this phase and get to the second phase against the base of the cake, which adds a new element: fright. Party members can get shaken up from attacks, usually from ghosts, but the cake has an attack called Sandstorm that hits all party members and inflicts the shaken-up status, which roughly halves their attack and defense. As a kid, this fight took me more attempts than I’d like to admit, whereas today I have no problem. The fight ends with Booster coming back in and getting dared to eat the cake in one bite, which he does. I like that solution!

When we arrive and drop Toadstool off, we get the first full exposition dump, which also allows for a ton of excellent character moments. The princess exits your party and stands in her rightful place next to the Chancellor while Mellow, Geno, and Bowser all introduce themselves properly to Toadstool and the Toads at large. We get more pantomimed comedy with Mario and the gang, and a good conversation where Geno explains that with the Star Road broken, no wishes can be granted, which would include Toadstool’s wish to be rescued from Bowser. This prompts Bowser to contemplate whether leaving the Star Road broken is a good thing, only to have Toadstool snap back that his wish to reclaim his keep also won’t come true. When Bowser confuses himself, and feels that his genius is misunderstood, Mallow is the one to go have a heart-to-heart with him, something that is never addressed but is interesting to see since it builds a quiet relationship between the two that never has to be “a thing.”

The Chancellor ultimately says that Toadstool must stay, though once you get outside she floats down and joins your party for good. And with that, we have all five party members! Toadstool fills the clutch healer role that Mallow dabbled in, but to a much more refined degree. While she’s the weakest in terms of physical attacks (at least for now before we get her frying pan ultimate weapon), her Group Hug Special is straight-up OP since it heals the whole team for a good amount of HP and cures all status ailments. Once we equip her with some nearly indestructible armor late in the game it’ll be all but impossible to lose, especially since another of her Special Attacks is a resurrect.

Why don’t we just move on!

Though the game suggests you need to ask Frogfucious where to go next, it’s pretty clear that Star Hill is the destination since it’s literally the next location you can go and isn’t locked or anything.

Star Hill is weird. It’s a mound of what sort of look like meteorites with little star flowers and stars that contain wishes when read. You can read any of these stars and some seem pretty simple, like Raz’s wish “I can’t wait to start a family,” though there are others that trigger little cutscenes like Mallow’s wish not to be such a crybaby and the wish from Mallow’s parents wishing that he returns home safe. Personally, I just love Luigi’s wish (“I wanna be a great plumber like my brother Mario,”).

The gimmick here is that there is one huge star with a keyhole in it and to open the keyhole you have to turn on all the star flowers in the area. You can battle a ton of unique enemies here like the Mukumukus (little gophers), Pulsars (green variants of the Cluster enemies in the mines), Geckos (literally geckos), and, weirdest of all, Mastadooms, which are skeletal mastodons half submerged in the ground. They seem terrifying but my levels are too strong, so instead I just have to hope Pokémon bogarts the name for Gen 8.

At the end of Star Hill we find the fourth star and exit at last. No final boss fight to this section, just a fairly simple trip through Star Hill with some character details should you choose to read them. For now, I head to the next town--Seaside--then save and prepare for the fifth segment of the sea with pirates, sharks, and even MORE weirdness!

Come back next time for more weirdness!