What's up, campers. I did not forget to check in. I'm very much here, man. The second week back from my month of wanton physical self-destruction went better than the first. I made it to the gym more days this week, and I actually curbed my default instinct to hoover up everything in sight. I even have made an effort to get some more vegetables back into dinner rotation. Things feel better, certainly.

Well, not physically. The gym is kicking me right in the ass, and I've been coming home sore all week. That's fine, it's actually rather satisfying to feel the effects (even the unpleasant ones) and affirm that exercise can still make me feel ways about stuff. The bike rides on the stationary are still a struggle, and my lower back has been screaming at me to find something else for cardio. Alas, my little gym has but one elliptical, and it's quite popular. I went back to doing some lifting, and felt pretty good about my work on the rowing machine. It's one of my favorites, if I can objectively assign "favorite" to the things I hate doing the least in the place that I openly loathe. As far as results go, I'm still not doing great. The number on the scale is still too high, sure, but more importantly I feel pretty big and slow lately. My face has regained some roundness, and my newly salvaged clothes from thinner days gone by are getting a little tight again. Does this happen to everyone around the holidays? I've never experienced it. I've just been big the whole time.

I've been feeling better mentally. I've gotten a hold of some of the things flying away from me last week, and a big boost to my morale has been going back to continue last month's novel. I have a slight confession, that if you read along regularly you might have noticed by now...I take teeny little everyday failures really hard. They weigh on me, and I judge myself harshly based on incidental nonsense. So, when I tell everyone for a month and change that I'm writing a novel, whoo-hoo, big man, writing the great American novel, and I explain that the exercise is to hit 50,000 words in 30 days as a way to fortify the habit of writing at least 1600 words a day, it sounds pretty low stakes if I fail to hit that goal. Because it's merely a game I'm playing against myself, after all.

I took that failure as if the penalty was my firstborn. Last month, my car got the everloving crap scraped out of the side of it, effectively confirming that my monthly payment on the vehicle is more than the damn thing is worth anymore. I took that better than failing NaNoWriMo. The night of Nov. 30 that became Dec. 1 was an ugly one, with my whole family asleep around me, and me wanting nothing more than to erupt like Vesuvius. There's nothing more soul-destroying than having to remain perfectly silent while trying so hard not to let your self-crafted anxiety consume you.

I tell you all of that to assure you that I'm feeling much better about it because I've taken the game construct away and just started writing for pleasure's sake. It's a lot better. It's far less productive, and there are some nights where I only get maybe a handful of new stuff down, but I can spread out and spend an hour doing research without feeling like I'm wasting time. I also have to trade time between that project and this one, which is going to be a struggle. Next week, I hope to have more content for the loyal Sandwich-Heads lurking about.

But, yeah. Bottom line, we're back in the saddle and it feels a little more comfortable. I'm just glad that I didn't wait until January like the rest of the world does. You should see my office gym in December. There's like three of us, and yet I can still never manage to snag that elliptical machine. 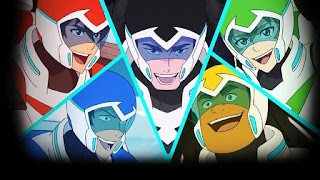 Since the eighth and final season of this show is premiering on Netflix this week, and somehow I've just spaced the entire run up until now, I thought it would be appropriate to give it a go. Why not? I like a lot of the folks involved, and it's a show about giant space alien robots and teens with attitude. Sounds like a hot ticket. I'm totally new to the Voltron franchise as well. As a kid, I had a habit of conflating a lot of 1980s cartoons linked conceptually to toy lines into one amalgamated bucket in my head marked "advertisement." Sometimes, I'm vindicated (go back and watch some old "GI Joe" episodes if you can stomach it at all), and sometimes it's completely reflexive and likely unfair, as it might have been with the original "Defender of the Universe" arc.

Often with such a formula, that of five or more unruly young folks each given an identifying color and great power in order to save the world while also coming of age as a team, is one that Voltron helped cement as a trope back then. Now that audiences have seen it recycled, borrowed, and refined over the years by various contemporaries like the Power Rangers, the emphasis of the show has to reside on the characters and their relationships in order for it to be fresh at all. Luckily, Netflix and Dreamworks took the task to some of the best people for characters and relationships in modern animation: Joaquim Dos Santos and Lauren Montgomery, who both worked as storyboard artists on Nickelodeon's "Avatar: The Last Airbender" and since went on to direct and produce for the follow-up "Legend of Korra" series. Between "Voltron" and "The Dragon Prince," it appears Netflix has recognized the right people to expand their cross-demographic Americanized anime stable, as both shows are clearly creative descendants of the much loved cartoons.

The show's big success, much like "Korra" and "Avatar" before it (and much like "Dragon Prince" as its contemporary), is to weave between a self-serious, proper pomp to the life-and-death stakes and a personable sense of fun and adventure. The highly engaging space opera is frosting on the cake. It reminds me very much of the 2005 revival of "Dr. Who," as it appears to be a loving, reverent update of the original that still primarily functions as a strong jump-on point for newbies such as myself.

Voice acting in "Voltron" is almost too good for what it's for, with Tyler Labine standing out as Hunk, essentially the Space Force equivalent to John Candy's character Ox in 1981's Stripes, and "The Walking Dead" alumni Steven Yuen acting as broody Raphael surrogate, Keith. Rhys Darby is pretty conspicuous as slightly bumbling advisor to the powerful space princess, and his comedic energy helps the quieter side of the show find shape. This is all par for the course when an animated show boasts voiceover legend Andrea Romano as Voice Director, as this season does. Each of the five Paladin pilots gets a pivotal arc or moment to contend with, though team leader Shiro and hothead Keith do sometimes feel interchangeable early on. The initial quest, to find all five lion robots in order to match them to the members of the team, provides a strong opportunity to pair off different personalities within the hero squad. Dos Santos and Montegomery are smart to use this device as immediately as possible in order to deepen bonds between the Paladins and bank some audience investment in them before their first major moments of peril.

The Princess Allura character is, unfortunately, designed to be more than a little wooden for the first chunk of the show by virtue of being their talking encyclopedia. She improves beyond her status as a prop, thankfully, and gets a little bit of comedic business which was quite endearing. The villains are Saturday morning cartoon villains, alright, and so their motivation and characterization is solidly one-dimensional and takes a permanent backseat to how cool their purple battle-ax spaceships and armors look. That's kind of fine. Animated adventure shows these days have gone strictly in a direction that favors internal, individualistic journeys rather than lore-heavy conflicts. Heroes go on adventures of self-discovery, they find their place in the world or what about them is different. Villains are now secondary, unless it takes place in the DC Universe.

The animation is also something spectacular. Action sequences are among some of the most slick cel-shading I've seen in the last decade, and the character designs get progressively more distinct as the season goes on. Alien species range from Totoro-like benign fluffiness to Boba Fett inspired unflappable metal faceplates, helping to convince that the universe is a vast, varied place with room for stylistic playfulness from the creators. Being a fan of "Korra," I'm excited at the prospect of a potentially whacked-out new environment or character design being a mere Altean wormhole away much the same way spirit realms provided some startling, rich visuals on the older "Avatar" shows.

Once the giant robots take over the action, there's a satisfying amount of majestic scope attached; these mostly hand-drawn gigantic space mechs always move with the weight and epic scope necessary to sell the premise. There are some big-budget blockbuster films that try to evoke that sense of perspective and fall short even when using sophisticated computer animation and live action references like motion capture. It's impressive. And it's also so unapologetic about how vibrant and splashy they can get it. It's a real candy-splash of a Lisa Frank poster, just featuring some neo-classical robots and a cool Wing Commander motif baked in.

All in all, I had a really fun time. My only complaints are nitpicky ones that have more to do with Netflix mandating the "binge-ability" of a show, and how that affected the structure of this first "Voltron" season. And, as always, Netflix shows never seem to shed the two or three extra episodes per season and just tighten up the storytelling in spots. I do see that future seasons are around six or seven episodes, and that sounds perfect for me. And I definitely will be coming back to the show. I recommend it for family viewing, it's a show that has a broad base of appeal and I'm squarely in the sights of it.

-"The engineer puked in the main gear box. As everyone knows, vomit is not an approved lubricant for engine systems."

-The triple-length pilot episode is a big of an exposition slog, by necessity. It gets a lot of the world building out of the way, and has a very neat, self-contained structure in three acts, with a measured array of action beats, including the final battle with the first appearance of Voltron. Even if too long, I applaud the pilot as a good yardstick for new viewers. If you aren't all-in by the end of the pilot movie, you know how the rest of the show will feel.

-I can't praise enough the "ticks vs. seconds" gag that opens Ep. 6, "Taking Flight," which takes some much needed time to hang a lampshade on all the interstellar travel and how "Voltron" is much more Lucas than Roddenberry in regards to the science fiction fixtures. It's also just a great punchline when Lance comes out of his medical pod un-greeted and asks, "Are you all having a...clock party?"

-I don't know how to describe the color palette of the show, other than the big technological aspects and the Galra ships having something of a vaporware purple gradient thing going on, and I really dig how specific and clean it is. As much as I love the Star Wars "lived-in" look, with grit and age and distress on every surface, this is a great break from it.