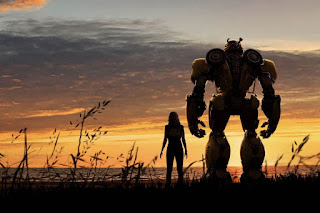 Against all odds, I went and saw a Transformers movie in the theater for the first time in ten years. And it was hands-down the best Transformers film possible, under the circumstances. What are those circumstances? Well, for starters, it's hard to make a compelling film about action figures. That's not even a knock on Michael Bay. Think back: those bland, ham-sandwich G.I. Joe films, Masters of the Universe, something vile called Max Steele, and probably some others I don't remember. It is very easy to put together a coherent enough, exciting enough action adventure. Money will take care of most problems on the route to that goal. But making a Transformers movie that's more than "good enough," it's a rough task.

After a decade of bland cacophony full of self-serious mythology and half-assed character development, Bumblebee serves as a The Force Awakens moment for the franchise. It's charming. It's inclusive. It's nostalgia-driven.  It relies heavily on the built-in audience's good will for callbacks and "remember when..." humor. It centers on a compelling young female presence, breaking up the boys' club mentality of the previous entries. And just like the proverbial soft reboot of Star Wars, this film is quite up front about how safe and conventional it is willing to be, and there's no shame attached.

The self-contained plot, largely cribbed from ET like so much of the 1980s came to be, goes through every motion expected of it and makes for a perfectly nice trip to the movies. Hailee Steinfeld proves once again that she is capable of carrying the meat and potatoes of a film single-handedly and give a standout performance even when the film conspires to overshadow her completely with other bells and whistles. In 2011's True Grit, they put her in the frame opposite Jeff Bridges, Matt Damon, and Josh Brolin in various gigantic acting choices. Talk about exceeding expectations. In Bumblebee, she merely has to keep up with a CGI robot, and she does quite better than most of her human predecessors ever did with everyone's favorite li'l Autobot. Meanwhile, John Cena plays his end to the nosebleed section as a crazed Air Force Colonel on the hunt for robot aliens. The former WWE star certainly has a future in comedy, as he knows exactly what is funny about himself and uses it with the same journeyman confidence that he does his physique.

Without much in the way of novelty from the story, director Travis Knight brings that patented Laika zeal for visually communicating emotions and character growth through action and reaction. Knight--director of the stunning Kubo and the Two Strings for my local Hillsboro, Oregon animation studio--spends more time telling the audience who Bumblebee is, and how he relates to Steinfeld's troubled teen Charlie, than the amount of time spent on the two mechanical mustache-twirling Decepticons who have followed him to Earth, casually invented the Internet, and hunted him down. What results is a more mechanically motif'ed Spider-Man: Homecoming: a new modern coming-of-age teen hangout movie, where teens relate to characters not by watching them deal with casual sex, uncertain futures, and abusive parents, but instead experiencing big teen emotions through big teen metaphors like superpowers, alien invasions, conspiracies, and acts of extremely stylish daring. The big robot rumbles still seem weightless and computer-y, but thanks to the uplifting glances of comfort and respect between the oversized cute alien and the vulnerable young woman, I actually care when Bumblebee is hurt. I'm a sucker for a gentle, learning robot story, but this is the first time a Transformers movie ever even sought out my allegiance before taking me to a fireworks factory.

Set in the mid-1980s and flush with classic rock, classic cars, and classic Transformers character designs that actually look distinguishable from each other, Bumblebee is not afraid to take a few minutes for some easy jokes. It suffers from extended nostalgia-porn urges, with loving little snickers at the 1980s used just a little too much as connective tissue between weepier emotional scenes and big action beats. That doesn't mean it isn't fun, and the nostalgia nods come from an informed place...er, for the most part. There's no reason for it to be a period piece, other than to craft Charlie and her fellow humans some ready-made personalities out of their pop culture tastes, but if we start playing that game we eventually get to "why are Autobots and Decepticons called that before they ever encounter automobiles or commit the deception of transforming into them?" Ultimately, the setting was chosen because it works. The car-to-robot concept was chosen because it works. And Bumblebee itself totally works. Runs good. Slight rusting in its interior, but a perfectly solid body and a whole lot of character on the road. Here's hoping that Paramount sees what a great project this franchise can be, if given the proper tools and enough time and effort.