The Mandalorian, Chapter 2: The Child 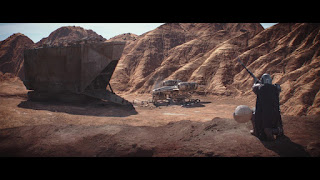 It's a strange choice, with only eight episodes, to spend an entire one segregated from the larger narrative to go on a fetch quest. And with the episodes so surprisingly short, I can only imagine that this first season of The Mandalorian was outline much more like a long feature film instead of a series. As such, it follows more rules of a big blockbuster than an episodic story, such as action beats arriving like clockwork every ten minutes or so, regardless of their relevance. Following an immediate fight to keep his target safe from some Trandoshan hunters, Mando has a long-range shootout and daring chase sequence with some Jawas and their sandcrawler, and then later he fights a big beastie in order to steal its egg. This is less Sergio Leone western and more John Ford western, with more scope and emphasis on the environments and less on the hardnosed coolness of the lead characters.

But character development does happen. The Child, or "baby Yoda," as the Internet has dubbed it, provides a lot of the meat of this episode. The chapter's crux is the reveal that yes, indeed, this little green cutie is powerful with the Force just like the other examples of its species. Ultimately, this is setting up some higher stakes for what comes later. Werner Herzog's shadowy Client does not have nice things in mind for our new favorite little alien, obviously, and now that we know the Force is with the Child, you can be sure that the Mandalorian will have to make a choice between his personal investment in reclaiming all that beskar and his newfound connection to the heartwarming little MacGuffin. This is handled very well, although I understand why a lot of viewers could have used some cutaways to the bad guy making preparations. It would have ruined the isolated ambiance, definitely, but it also would have assured folks that this was not a "filler" episode designed to keep the plot stuck in place a while longer.

Meanwhile, the Child's adorable stumbling and eating of frogs and expressive face provide all the emotive reaction and connection that Mando can't provide by himself. It's some serious Lone Wolf and Cub vibes, which fits the western/samurai motif of the show, and it feels a lot more organic and natural than the alliance between the bounty hunter and Kuiil. The local Ugnaught, played by Nick Nolte, remains relentlessly helpful and resistant to any kind of reward or development of his own, which is oddly convenient and clean. His motivation to help our antihero has ranged from "I've never met a Mandalorian before"--which, okay, fine--to "you've brought peace to my valley," which...makes very little sense considering all the disintegration and blaster fire. But it sounds nice and western-y, right? I get the idea that before long, IG-11 and Gina Carano's Armorer might join the little pig-faced fellow in helping the leading man defend the Child as a sort of motley crew. That's my prediction.

This chapter is directed by Rick Famuyiwa, whose previous work has never consisted of this much action (unless you count the months he spent trying to develop a standalone Flash movie for Warner Bros, which has yet to happen). While he handles the rough-and-tumble bits well, the real advantage of his eye behind the camera is in depicting friendship, or at least cooperation, across cultural lines. Kuiil's respect for the Mandalorian is palpable and sincere, and when he relates that he escaped a lifetime of servitude, the normally stoic outlaw is quick to sympathize and offer his thanks. This even extends to the affection brewing between the Child and Mando.

Time management of this series continues to be a little puzzling, and it's sometimes so stark and straightforward that folks are inevitably going to accuse it of being all sizzle and no actual steak. But to use another western analogy, this is not Lonesome Dove in the stars. There are no rules that state a Star Wars story has to be a complicated chess game of intergalactic politics or lore. The simplicity is refreshing, I think. But now that we've spent a lot of time goofing around on Arvala-7, it would be great to get a little bit of contrast, say in the form of a cityscape location or a strictly spacefaring adventure?

-"I'm a Mandalorian. Weapons are part of my religion."

-There's so much ambient electricity crackling across Mando's armor. It's a good visual representation of him being injured without needing to show any gore, but it's also a distracting post-production add. I wonder if Pascal even knew it would be there when he was performing the scenes.

-The punchline of the Jawa's task, complete with some gross goo, felt almost like a Coen brothers plot resolution. Like, "Oh. All that effort was for something so dumb and circumstantial. Such is life." It works for levity's sake, but the comically bleak tone of it doesn't fit Star Wars perfectly.

-"May it survive, and bring you a handsome reward." Anyone get the feeling that this little pig-man is giving us the underlying premise of the show in this line? Perhaps a different, more emotionally significant reward than some culturally important metal awaits the bounty hunter if he can continue to protect the Child. Especially since his life also began as a "foundling."