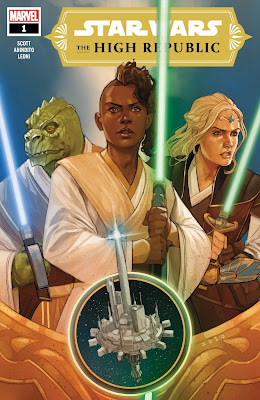 It was over a year ago now that Project Luminous, the secret, bold expansion project for the Star Wars property, was revealed to be a publishing endeavor that would tell a fresh set of stories two hundred years in the past from the movies. This week, the High Republic has landed, both in the form of a novel, The Light of the Jedi, and this Issue #1 of Marvel's latest comic book foray into a galaxy far, far away. It's a weighty first outing, with a healthy bit of exposition to set the stage for this new era of the sci-fi fantasy canon, but thankfully the comic delivers on exciting action and instantly endearing characters while also providing one heck of a tease for a dramatic tragedy yet to come. That's a lot to pack into twenty-four pages. Luckily, Marvel found the perfect combination of Star Wars nerds to strike out with original material while still staying true to the franchise's trademark ingredients.

Ario Anindito provides the penciling, and his penchant for dramatic textures is on full display from the Trandoshan Jedi master's reptilian scales to the opulent fabrics of the robes. But unlike his work on Atlantis Attacks last year for Marvel--wherein Anindito also inked his own pages--the use of shadow is quite muted. This, combined with the golden veneer provided by colorist Phil Noto, provides an almost sepia palette off which the bold hues of lightsaber blades, alien creatures, and swirling neon Force visions really pop. It cues a reader that this is an antique setting, and helps set the mood for writer Cavan Scott's very old-timey Arthurian tone. Scott succeeds where the Star Wars prequel films often failed: establishing a bygone era where speech was flowery and theatrical, and action was very bold and grand in execution. The difference is that Scott remembers to put the flowery words in the mouths of complicated, relatable characters.

The issue concerns Jedi apprentice Keeve Trennis, a character as well-established as Kamala Khan was in her first issue of Ms. Marvel; Keeve cusses a little too much, she is her own worst critic, and even with the training of the Jedi Order she is short on patience. In short, I couldn't be more excited to have a protagonist like this, a young and vibrant person who may get lost in the weeds when faced with big choices. Meanwhile, Sskeer, her reptilian master, manages to hide multitudes of haunted pain and suspicious glances without saying much. Master Avar Kriss, the newly appointed Marshal of Starlight Beacon, is a bit of a cipher if one hasn't dipped into the Light of the Jedi novel yet, but luckily her role here seems to be that of the Admiral Adama-esque coordinating leader. I have no doubt she may soon bang a fist on her desk and ask for Keeve's badge and gun...or, you know, some enlightened warrior-monk version of that. The plot is small and personable with only hints at the galaxy-wide stakes yet to come. Keeve is surprised to find she is ready to face the Trials to become a full Jedi Knight, but in the middle of the test she is caught by surprise when a species of giant hive-minded monsters are drawn toward the area to destroy everything in their path like locusts. Keeve's high-flying adventure is juxtaposed with the political happenings aboard Starlight Beacon, a newly completed Jedi space station on the galactic frontier meant to act as a symbol of hope and inclusion to any who seek assistance. Kriss is given the task of running the station by a visiting (visibly younger) Master Yoda, and it's clear the crown may hang heavy.

A big highlight of the opening chapter is the pomp and circumstance surrounding Keeve's knighthood and Starlight Beacon's dedication ceremony. It's very clear from Kriss's speech at the dedication--heavy on big religious ideals like covenants and unity, culminating in the affirmation "For light and life"--that the High Republic will be a gilded age of renaissance within the Star Wars mythos. Scott is game to give the Jedi the level of adornment and pageantry that Star Wars has only hinted at until now. The knighting scene happens to demonstrate effective emotional weight and terrific comic book pacing. It happens so abruptly that it knocks a reader off guard and then melts your heart in the next second. It was a real treat to feel exactly what our protagonist feels in that moment. I personally have a lot of warm feelings for Genndy Tartakovsky's depiction of Anakin Skywalker's knighting ceremony in the 2003 Clone Wars animated microseries, and the recitation of "By the right of the council, by the will of the Force, I name thee Jedi, Knight of the Republic" let me know that this series is going for a big theater experience. I, for one, have my ticket and am ready to come back every month.