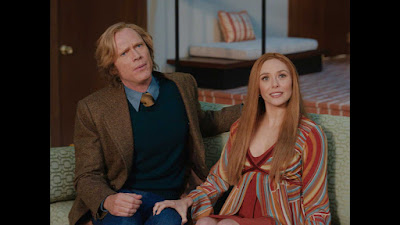 Wanda Maximoff, as she is written and portrayed in the Marvel Cinematic Universe, is a hero defined almost entirely by pain and regret. Her origins as a lab experiment and enhanced minion for Baron Strucker and Ultron, the deaths of her parents and twin brother Pietro, her failure on an Avengers mission to Lagos that resulted in civilian casualties, and then the doomed love affair and death of Vision are an absolute dogpile of narrative torture for one young woman who has never been allowed an unqualified win or any measure of unbroken happiness since audiences were introduced to her. This latest episode of "WandaVision," the unlikely sitcom wherein Wanda seemingly finally gets to have it all and live happily, continues the bubble-bursting for her when the arrival of her twin boys is marked by the same mysterious dread that has permeated the first two outings for the series.

Since Lucille Ball gave birth to Desi Jr. on the same day Lucy Ricardo gave birth to Little Ricky in 1953, comedy television has always used the birth of a new baby as a pivot point. It puts the "situation" in situation-comedy, with broad plots like mistakenly switched babies at the park or something as simple as a character uncomfortable around children being forced to care for the infant. The new Disney+ program, not being in the business of lazy reproduction or parody, skips out on all of this in order to use a TV trope as a comedic plot device in itself: the mysteriously accelerated life cycle. While some folks will remember how Chuck Cunningham wandered up the stairs in one episode of "Happy Days" and seemingly ceased to ever exist, this episode of "WandaVision" is concerned with a similar phenomenon. Isn't it always a sitcom that will give birth to a lead character's bouncing baby, and then reintroduce them within a handful of episodes as a walking, talking toddler? Well, Wanda and Vision are just ahead of the curve.

"Now in Color," on the surface, is a chestnut of sitcom material surrounding pregnancy and parenthood. Wanda's pregnancy is manifested hilariously through her superpowers, with electricity surges through the whole neighborhood standing in as a '60s TV-friendly shorthand for uterine contractions, and a full-on rainstorm inside the house with the classic "my water just broke" punchline. It sees Vision intellectually flummoxed as only a first-time dad on TV can be, using his android abilities to digest all the baby expert handbooks and even to chase down the doctor when the baby is due to arrive, and yet he is still awestruck and giddy at meeting his new twin boys. It's all so familiar and comfortable to a lifelong TV viewer, and yet so inventive and appropriate for these characters going through their own unique version of this relatable scenario. But then, it also channels their confusion and anxiety into the ongoing intrigue of the series premise. Vision notices the neighbors in West View whispering conspiratorially to one another, and behaving more and more erratically. He cannot reconcile the impossibility of Wanda going through nine months of pregnancy in a single day. And then there's Wanda and Geraldine. 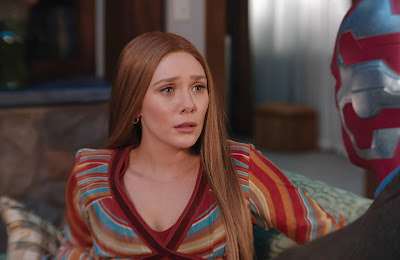 Geraldine, a character innocuously introduced in Episode 2 as a confidant for Wanda's unease, is suddenly thrust into a more vaguely sinister role as she tries gently to extract more of the Scarlet Witch's unpleasant memories to the forefront than whatever this television show construct has previously allowed. It's unclear if she's here to help or to manipulate our domestic heroes, but even more unclear is how she was tossed out of "here" and back into the MCU's reality by an untrusting Wanda. Several other neighbors almost crack and reveal more to Vision than they are supposed to. And with only a gentle push, the peppy anticipation of new life is drained from the faces of Paul Bettany and Elizabeth Olsen, and replaced by existential fear and suspicion that tightened my chest in a way I still can't believe this show is capable.

Geraldine has been literally thrown out of what appears to be the familiar suburban neighborhood, which is separated by some kind of electronic barrier or force field. What does this mean? For starters, West View's nebulous reality does seem to have some sort of actual physicality to it. With the other neighbors showing signs of ulterior motive, is it safe to say that "WandaVision" is actually performed "live in front of a studio audience," so to speak, rather than in some digital or magical pocket universe?  Further, Geraldine's medallion that triggers Wanda to extreme fight-or-flight reaction matches the one on the toy helicopter Wanda previously found. Comic book fans may connect it to SWORD, the sister agency of SHIELD that dealt specifically with extraterrestrial threats, but has not ever been seen or mentioned within the MCU. Why SWORD? Does this hint at the television construct being of alien origin? Is this how Kevin Feige's team begins Phase 4 of the MCU in earnest, with a possible adaptation of the Secret Invasion arc? Don't touch that dial, as they used to say.

The little tidbits and teases of answers that grow with every episode of "WandaVision" is a screenwriting triumph, and as I mentioned in the first review, this show would be a winner even if it never moved beyond its traditional television pastiche. The costumes and set design are exquisitely detailed, from Vision's Robert Redford ensemble to the very deliberately "Brady Bunch"-style new shape of the house. But this third episode proves without a doubt that the performances herein are the most potent trick in the series' bag. Bettany and Olsen walk a tightrope every episode, taking the audience by the hand and gently, just with the power of their faces, move each chapter further and further away from comfort and closer to something soul-crushing. Teyonah Parris, as Geraldine, without giving away even a morsel of backstory this time out also manages to find an emotional peak that conveys something helpless and crestfallen. Much like the shark in Jaws, the answers to all the questions provoked by the show's premise seem much scarier the longer I am denied them in full sight.