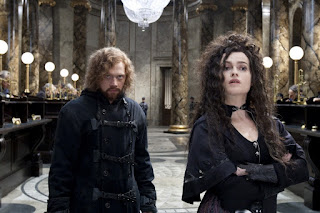 I went to high school during a very particular period where the forces of Tim Burton's filmography, Hot Topic's monetizing of "non-conformity" aesthetic, and the normal teenage misinterpretation of Fight Club made Helena Bonham Carter a household name. Before that, she served her time as a "corset queen" in television and film adaptations of period stories like Lady Jane and Twelfth Night, after a breakthrough early role in A Room with a View. In 1997, she was nominated for a Golden Globe and an Academy Award for her performance in the adaptation of Henry James novel The Wings of the Dove.

Bonham Carter, who started acting as teen with no formal training, has since become a staple of both Burton's off-kilter blockbusters and more stately dramatic films. Her performance in 2010's Best Picture, The King's Speech, was nominated for Best Supporting Actress for the sheer grace and subtlety of her Queen Elizabeth, contending for screen time against Colin Firth's afflicted King George and Geoffrey Rush as the therapist treating him. Meanwhile, Burton took great advantage of her versatility and dynamic physicality throughout his various effects-heavy adaptations of sci-fi classics, psychedelic children's literature, and television horror. Best of them, in my opinion, would be her turn as Mrs. Lovett in his production of Sweeney Todd: The Demon Barber of Fleet Street. If ever there was a better role to take advantage of Bonham Carter's unpretentious use of wild physical expression, not to mention her voice, I haven't yet seen it.

But I'm avoiding the real reason to celebrate Helena Bonham Carter, at least today. I recently went on a nice long binge of all eight Harry Potter films, and though almost every single adult role is filled by a master thespian or some tremendous talent who threatens to snatch the movie away from the teen leads, it's not until 2007's Harry Potter and the Order of the Phoenix, the fifth film, that Bonham Carter explodes onto the scene in one of the series' biggest and gleefully loony performances. Her unhinged, escaped war criminal and Dark Lord zealot Bellatrix Lestrange is something of a whirlwind every time she crops up in the latter four films. Much like Alan Rickman's Professor Snape, she deftly commands all the attention during her scenes, most of the time with vaudevillian movement and shrieking cackles. But some of the time, all it takes is her little sing-songy speech pattern or the wolfish grin that remains plastered across her face while threatening some underage wizards.

It's hard to pick one moment out of four (really, really long) films worth of appearances. Memorably, Bonham Carter took her action-packed debut as Lestrange so far she managed to accidentally rupture an eardrum on poor Matthew Lewis, who played her somewhat-nemesis Neville Longbottom. Her character gets far more to do in the final chapters, as a large set piece takes place in her gloomy home and dungeon.

Part eight of the film series, The Deathly Hallows Part II, gave Bonham Carter a big opportunity to play with her choices. Because Emma Watson's Hermione is disguised as Lestrange, Bonham Carter now got to play Hermoine pretending to be her character. And this was impressive to me. Her ability to mimic Watson's performance, which had been cultivated over ten years at that point, is real craftwork.

Posture, eye contact, breath, and even speech pattern (Bonham Carter was dubbed by Watson but still gave the cadence of each line) all draw inward from the raving lunatic that is Bellatrix to become the mousey, nervous teen. It's only for about one scene, and it's so casually deployed. According to Bonham Carter, it was Watson who gave her some insight into the character's gait and mannerisms, and her close study shows in what becomes one of the standout scenes of the final installment.

A famous acting teacher Sanford Meisner said "acting is behaving truthfully under imaginary circumstances," and boy, you can't get any more imaginary than a teenage sorceress magically masquerading as a middle-aged psychopathic stormtrooper in order to pull a bank heist. Bonham Carter's truthful behavior is laced with the uncertainty of an adolescent trying not to get caught using a fake ID, and as much fun as it was to watch her bounce around like a caged predator as Bellatrix, it was even more fun to add a new level of refraction and see her tensed and meek.

The aspect of Bonham Carter's participation in the Harry Potter series that I enjoy the most is a compliment I often give to veteran thespians tapped for a popcorn flick: she knows what movie she's in, and she gives a performance that matches the tone and energy necessary for such a movie. The same can be said for most of the great blockbuster villain performances, and Bellatrix Lestrange is a secondary villain. In a perfect world, Bonham Carter would be pursued to play a major villain in a future Bond, Star Wars, or superhero film so we can watch her have fun some more. But in all honesty, if she were to play a tree in children's theater she would find a way to make the unreal real, and I suspect this is why someone like Burton favors her for his oddball fantasy films.