TL;DR - "Dundee: The Son of a Legend Returns Home" is a Really Weird Advertising Idea 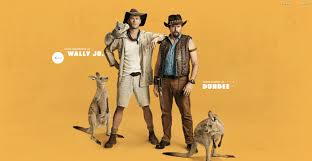 I subscribe to a Youtube channel specifically for new movie trailers, and I've even started doing little Vine-esque reactions to trailers over on Stardust (that thing Nostalgia Critic keeps plugging, yes) and I was absolutely flabbergasted by the arrival of this press kit for an alleged movie called Dundee: The Son of a Legend Returns Home, which supposedly stars Danny McBride as the American son of '80s oddity Crocodile Dundee, and Chris Hemsworth as the strapping son of the funny little chap who functions as Paul Hogan's sidekick in the original.

This isn't a real motion picture. It isn't. As many were quick to point out way ahead of me, it's just not likely that a reboot of a thirty year old franchise (there were three films, if you can swallow that hard truth) starring two A-list actors wouldn't have any advance news or buzz before dropping a teaser trailer. As a matter of fact, two teasers dropped on the same damn day and appear to feature only McBride and Hemsworth at completely empty, yet conspicuously picturesque, locations.

The plot seemed to thicken when, as I confirmed through the most casual of Google searches, the film had no listing on Screen Australia's list of upcoming releases, the reported director Steve Rogers was a well known advertising executive, and Hemsworth himself is touted as a "Tourism Ambassador" for his homeland. Also, you know, it sounds like a bonkers idea for an existing intellectual property, the title sounds ludicrously made up, and the teasers were only about thirty seconds long...about as long as a Super Bowl ad.

As of this morning, after literally every entertainment site on the planet essentially said, "Yeah, we're not buying that this is real," it was confirmed that in fact, Dundee: The Son of a Legend Returns Home is definitely an expensive Super Bowl marketing campaign for Tourism Australia. My guess is that it'll be parsed out over two or three ad slots during the big game, and will consist of a few vignettes of McBride clowning around with a gorgeous Australian landscape behind him. All's well that ends well, everyone saw through a harmless prank meant to increase business. No harm, no foul.

But, er...this is a really terrible idea. If Rogers is, in fact, the guy running the show on this campaign, he had the seed of a truly genius joke and two very able comedic actors at his disposal, but the release of these teasers this far ahead of the ad's full premiere has done nothing but make savvy consumers shake their heads. I know that Super Bowl ads are now on par with the budget and business of a small scale feature film, but is this where we are headed? Are we going to get teaser trailers for Super Bowl commercials now? Because I guarantee that people far more rich and far more important that me see the utter confusion, the narrowed eyes of skepticism and annoyance that I've seen flooding the internet as a total success. "Just think," they are probably saying, "Our commercial has as much buzz and anticipation as a summer blockbuster!" They don't see a dismissive shrug as negative press. So be on the lookout for them to start stacking marketing campaigns this way.

I don't take issue with the idea of a fake film, but I certainly take issue with this needlessly nonsensical attempt to pass it off as a real film. What, or who, does that serve? Sure, it got everyone talking about "Dundee" for about a week or so, not really understanding why it exists. It might have even gotten some Crocodile Dundee purists--the existence of which I refuse to deny--hot under the collar over McBride's "casting," et cetera. If the folks behind this might have been transparent about its purpose, it might have been lauded as a really cute idea. If they had simply waited until game day to air it as a surprise, I'm positive that it would have been talked about for years alongside campaigns like the Budweiser Frogs.

I know, I'm getting worked up over less than nothing, but suffice it to say that someone needs to tell ad agencies to watch their favorite Funny or Die video one more time, and look for the part where it becomes clear that everything is one big goof. That's...that's how this works.

tl;dr - Fake movie is fake, news at 11. It sucks that we have to go around telling each other this, because Neo-Don Draper really thought it would be fun to see how long it takes for his intended audience to puzzle out that it was fake. Great salesmanship, mate.
Labels: blog tl;dr