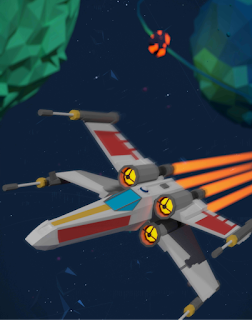 Sometimes I'm a real sucker. I'll peruse the Google Play store looking for mobile games and like an aphid to a wild rose, I'll click on just about anything that shows me an X-Wing. Excuse me, an "X-Fighter," as it's called here. Crossy Space, created under the somewhat loaded banner of School Project Games, is a variation on the latest "endless runner" genre trend, which is the endless hopper that emulates classics like Frogger.

Rather than the tried and true controls of forward, backward, left, and right, Crossy Space has taken the concept of the endless hopper to a simplistic extreme and gives a player one control with one purpose: tap to jump, and keep on tapping. The player's preferred spaceship circles a planet automatically and with a mere touch leaps through hyperdrive to the next source of gravity. So, it's largely a question of aiming and timing, but be sure to ride the very edges of those gravity circles because flying directly toward the planets themselves or accidentally missing them completely and careening off into space causes your ship to explode like a gasoline drum. Players can chase down little star pickups and earn them through successful jumps and combos in order to spend them on new ships and try to collect the entire in-game fleet. You may also purchase each ship for $0.99, though they don't possess any different attributes beyond a new skin. 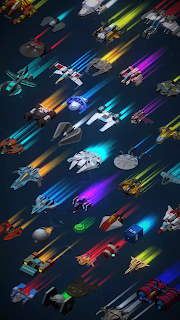 And that's, refreshingly, pretty much it. There are small quests listed in the menu to earn more of the star currency, and there appears to be an achievement system in the menu as well. Curiously, the achievement list doesn't seem to keep great track of the various things repeat players must do, such as reaching a certain number of crashes, collecting a certain number of ships, or watching a certain number of ad videos). This would be frustrating if the game were designed with these achievements as a necessary way to make progress, but they seem entirely superfluous. Confusingly, they don't reward you with stars, but with XP points that seem to have no function.

Beyond that possible glitch, the overall presentation of the game is lovely. The music is unobtrusive, and the sound mixing is just right. Though the explosions pack a little bit of punch, so as to really emphasize your sudden and inevitable failure, the actual files used for sound and music seem like generic assets. The ship and planet designs have a nice bubbly quality, especially on the replica designs of pop culture spaceships available. The starting ship is the "X Fighter," but everything from a TARDIS lookalike and several classes of Federation starships appear alongside some original designs and goof-off stuff like a standard flying saucer. There are some that I couldn't determine, based on the generic names and stylized cartoon look, if they were originals or something from a beloved sci-fi property, but hey. Points for trying, especially for what appears to be a small developer. 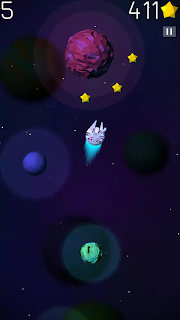 What struck me while playing such a prototypically casual, simple game was how unforgiving it was. Real deal, my high score as of this writing is a mere 16 jumps. I can't feel terrible about that, since the leaderboard system currently has a high score of 65. According to the app's profile in the store, several updates have included an incremental nerfing of the difficulty level, and one saving grace is how quickly the game drops you back into the action after exploding. There's no fuss, no load time, just a quick two seconds and you're right back in space. Another feature added from a developer's update is the option to continue your run after dying, for either a number of stars or watching a video ad. Speaking of which, the only ad revenue for Crossy Space comes from viewing ad videos, which is always entirely voluntary and always comes with a reward of some kind. This is refreshing, especially after weeks of pop-ups, banner ads, and obstructive paywalls hanging on the edges of all the mobile games I've played. 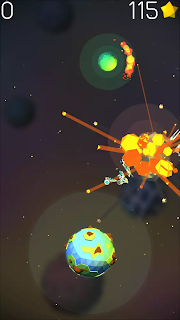 If School Project Games really is a developer in training or a hobbyist sculpting a portfolio, I'd call Crossy Space one heck of a promising start. It has problems, but the continuous updates seem to be slowy fixing them, and while it's simplistic and probably doesn't have a lot of lasting power, it's functional, looks great, and it puts basic design over monetary gain. At present, I give it a solid B.
Labels: blog Casual Friday