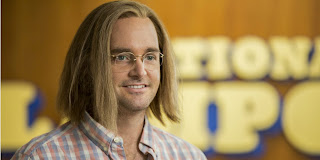 I'm not going to make some shitty quip about how the title of this film is more accurate than its creators probably intended, yuk-yuk, fart-noise. But I will say that Wain, Colton, and Aboud, the architects of this reluctantly conventional "unconventional biopic," seem torn between an honest sentimentality for the subject matter and a halfhearted rejection of the traditional means to convey that sentimentality. Because, well, of course. The subject itself would reject it. But in such a race to see how glibly they can tackle the origins of National Lampoon, and the melancholy story of Douglas Kenney's life, the filmmakers are so concerned with manufacturing irreverence out of their own limitations that it gets in the way of an otherwise really funny and heartbreaking film.

So, hey...we'll definitely go through Douglas Kenney's honest-to-goodness real experience with what Walk Hard: The Dewey Cox Story dubbed "The Wrong Son Died," but we'll be sure to thumb our noses at opening the film on such a maudlin story point. Yes, this film is going to over-simplify the writing staff of the National Lampoon down to four large personalities, including a token female presence, but don't worry...we'll acknowledge how untrue that is and give mention to all the talented people left out of the film, briefly, before moving on. Then a whirlwind introduction to some of the most famous and genius minds ever associated with the Lampoon brand: Chevy Chase, Bill Murray, Gilda Radner, John Belushi...and the filmmakers decide it would be prudent to admit, sure, these actors playing the very famous folks don't look too much like them, but...eh. Fuck it. And even a central character, a present-day Kenney played by Martin Mull, escorts us through the larger narrative and emotional points of his life with such a wry detachment that crescendos with him admitting that he himself is "a narrative device," which is "eh, a choice." And ultimately, that's the takeaway from this film: take all the thin spots of this project, and hang enough lanterns around it so you can see right through it, and that's...well, it seems more artful and deliberate than it really is.

It sounds like I hated it, but not at all. I think it's a very engaging retelling of Kenney and Henry Beard's creation of the magazine, and the eventual rise to fame and fortune, and the even more eventual downfall into drugs and loneliness, and it has a very effective release of emotional tension to cap off the structure of it all. If you just accept that it's as traditional a biopic as the ones it tries to brazenly mock, it's a good one. Will Forte's presence as Kenney proves that he is a viable dramatic actor, for what that's worth, and it moves along at as brisk a pace as possible for spanning a man's life from 1958 to 1980, involving lots of colorful detail about the largest moments in the magazine's history and the creation of two modern comedy classics. The dialogue is also razor-sharp, as one might expect, and somewhere hiding underneath the compulsive barrage of quips and non-sequiturs there is an effective subtext of Kenney's true (as far as any recollection has told) inability to confront a problem or a complicated relationship with anyone in his life. Lingering under the delightful dress-up is an actual character study.

The film is not much of a technical marvel, though. I can't fault that, since it certainly was not a Netflix original production, but merely a film distributed by the orc cop-slinging streaming giant. But Wain has skill as a director, a certain flair for off-kilter natural lighting choices and using the frame to aid a visual punchline. His more pastoral-set Role Models and Wanderlust just had more convenient premises for showing off his talents, as did his directorial debut Wet Hot American Summer. Here, A Futile and Stupid Gesture seems claustrophobic, anchored to facsimiles of New York offices and sidewalks for much of the run time. And all the while, the floppy, shitty wigs and dopey "period" costume and production design that were charming and definitely part of the joke in Wet Hot just make this look amateur and cheap. But again, Wain covers that by seeming to acknowledge it with lingering closeups of fake sideburns and awkward framing to symbolically smear Vaseline across any recreation of moments from "Lemmings," Animal House, Caddyshack, or the early days of "Saturday Night Live."

One problem that Wain can't quite circumvent is the recreation of such unique comedians that made those moments. Oddly, some of the performances herein can't quite fit because they're just too good; Joel McHale's top notch deconstruction of Chevy Chase, Domhall Gleason's dry and enigmatic turn as Beard, and Forte's involved primary performance as Kenney belong in something more polished or affecting. Meanwhile, the cutesy cameos from the likes of Thomas Lennon (as Michael O'Donoghue), Seth Green (as Christopher Guest), Ed Helms (as Tom Snyder), and a few others are something out of a loving--if entirely undercooked and tacky--television project that doesn't line up with the tone or the attempted deconstruction of the genre.

Ultimately, this is an honest story that doesn't bother to be too true, lest it be too depressing or un-engaging. It's an irreverent take on the classic beats of the traditional biopic, but those beats are still standing there in the room, even if they are standing in their underwear. I get the bit, and I acknowledge the work that went into the bit, but I do regret that this had to be a bit in the first place. This was a good enough take on a good enough story to stand on its own as a straight-faced biopic, but I guess the idea that Kenney would have hated the hypothetically mawkish Hollywood version takes precedent.

It's certainly an interesting watch, and there is plenty about it to enjoy. Think of it as a primer for some deeper dives into the subject, such as the splendid 2015 documentary Drunk Stoned Brilliant Dead, or the much more comprehensive and far less slapdash tellings in the books based on both films.

This review is a part of Kyle's Letterboxd profile where you can find other reviews not posted here on the Media Sandwich blog, including his rankings of the Harry Potter films, new observations on old favorites, and excerpts from his book Cinema Autopsy (now available on the Amazon Kindle store).
Labels: blog letterboxd reviews