Letterboxd Review: Everything or Nothing (2012) 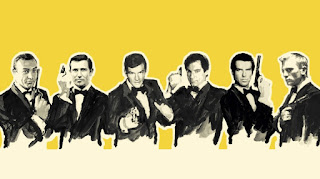 Among the several things that I planned out for 2017, including this blog site and the return of the Media Sandwich podcast, I made it my mission to watch all of the James Bond films so as to form my definitive opinion on each individually and on the series as a whole. Hard mode: I endeavored to watch them all on my various streaming services, and each of those services seem to purchase the entire series for about three weeks out of the year only. At any rate, I finally filled in the gaps from my adolescent Bond fascination (namely the Roger Moore and Timothy Dalton eras) and took a big nosedive into Bond geekery via the "James Bonding" podcast on the Nerdist network.

So, going into this fluffy 2012 doc about the series, beginning from creator Ian Fleming's extraordinary biography all the way up through the production of Casino Royale, I wasn't exactly a lightweight. What I got was an amiable tour of the broad strokes of the series, along with a more in depth telling of the Broccoli/Saltzman partnership from their surviving family. Along the way, the Bond actors good enough to appear (re: all except Connery, because of course) share their stories of being cast and living in the tuxedo. There is plenty of even-keel discussion about the Kevin McClory legal battles, and very little in the way of smack talk from the decidedly differently sided parties. All in all, it's a great "Bond Franchise 101" seminar, but history is always told by the victors and the shared production

At times, it plays like a really snazzy DVD special feature doc. While someone interesting like Barbara Broccoli is explaining a complex emotional period for her father and his longtime partner, the editor finds it cute to take a word or phrase from that interview and play it over footage from the films with a superficially matching subject ("He just felt overwhelmed, like he was drowning," cut to footage of James Bond wrassling a shark underwater or some such). At other points, it succeeds in acting as an abbreviated biography of Fleming, Cubby Broccoli, and Harry Saltzman that very ably includes some footage of them speaking for themselves and some balanced remembrances from their loved ones and the actors. A slightly smaller portion of the run time is more an exercise in gladhanding and "legacy" talk where we walk through the series at a rapid clip, stopping only for the big highlights and cheesily ignoring all of the nadir. Parts of this are genuine and great, like Pierce Brosnan detailing his rollercoaster emotions during the "Remington Steele" contract fiasco that ruined his chance to play Bond in 1986. Other parts feel obligatory, like Roger Moore having to justify his different approach from Sean Connery's for what must have been the thousandth time. I was disappointed that series lows like Moonraker and Die Another Day weren't meditated upon at all, but I know very well that gamblers don't talk about the hands they lose.

It's hard to say how much better this might have been if you had cut it into two separate, shorter features, with one detailing those powerful men and their decades of constant battling to make this series of beloved adventure films, and the other giving you a glossy overview of how much fun all six guys got to have playing James Bond, how they wanted to approach the character, and how the series tried to evolve with the films of the day. I would have enjoyed those more if they were divided out.

Another curious thing missing is any voice from the "Bond girls" of each era. While Maude Adams and Judy Dench pop up for the briefest of asides, I could have used some talk from, say, Diana Rigg or Eva Green on their characters and how they mark big moments in the Bond mythos. I'd even like to hear from Halle Berry about how they convinced her to sign up. I almost get the idea that the ladies didn't find the experience as enjoyable as, say, George Lazenby, who regales us with a little too much talk about how easy it was for him to get laid, like "five, seven girls a day!" which, uh...great. And as much fun as it might be to talk about movies with President Bill Clinton, why is he in this doc?

I might judge a lot of documentaries a little harshly for being one-sided narratives or being focused too hard on the sexy aspects of a real story while ignoring inconvenient facts. In this case, I mean...come on. It's a doc that was largely produced as a tie-in for Skyfall. Of course it's going to be EON-sanctioned material and will portray the fathers of the franchise as "complicated, but brilliant," rather than sometimes unreasonable, or petty, or pretty openly racist and misogynist in Fleming's case. To expect more is just silly, and Everything or Nothing is a perfectly adequate way to learn more about the franchise or just reaffirm some of the interesting tidbits you'd already heard.


This review is part of Kyle's Letterboxd profile where you can find more reviews not available here on the blog, including a list of films from his book, Cinema Autopsy, which is now available on Amazon.
Labels: blog letterboxd reviews