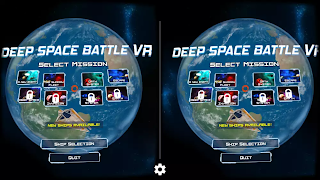 Virtual Reality is a cheap gimmick. In the gaming world, VR isn't even the equivalent of 3D viewing in a cinema...it's more like Smell-o-Vision. But, at the risk of sounding exactly like the kind of rube who makes cheap gimmicks profitable, there was no harm in me seeing how well the technology had advanced since the last time I had pulled on a doofy headset and started clawing the air in front of me. So, around the holidays, I snatched up two generic pairs of VR goggles for $5.00 each at my local department store. One set was for my experimentation with mobile VR apps, the other was a worthy addition to my son Robert's improvised Ghostbusters cosplay. Ray Stanz might be blind with his goggles down, but boy do they have decent heft and sturdy straps!

Anyway, I started perusing for games, and (pardon this terrible turn of phrase, I beg you) Deep Space Battle VR sort of jumped right out at me. I mean, if we aren't using this technology to pretend to be sci-fi fighter pilots firing lasers at some dickwad aliens...what are we even doing?

Because I really skimped on the goggles, I was relieved to see that the game did not require a remote control, and instead used gyroscopic head movement for all player input. That was perfect! Until it wasn't. Because your phone is snug inside your goggle apparatus, there's no screen control and no way to configure anything differently. This means that your exciting space dogfight in a Not-X-Wing consists of you turning your head to and fro, and once enemy ships are within your reticle the game auto-fires your laser cannons at it. Easy peasy. So simple, in fact, that one might say it's barely a game so much as an interactive POV adventure cartoon that is stunningly easy to fail to finish. 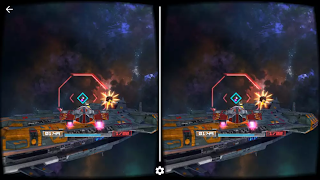 Let me back up and give DSBVR some deserved praise, though. The developer, Archiact, put some serious thought into some of the basic off-putting aspects of a hands-free VR experience. The game is ad-based and free to play, of course, and so when ads pop up at unobtrusive intervals, you can use the gyro controls to interact with the ads, as well. Does that sound like common sense? Sure, but tell that to a score of other VR apps and video services that would force you to remove your device and click out of an ad manually. Meanwhile, the design of the HUD within the game is helpfully located attached to your aiming reticle, with the radar swiveling around your field of fire. The ship variations are nicely designed, though plainly generic. I got a definite Wing Commander vibe off the aesthetic, which doesn't hurt in my opinion.

Now, even with some common sense design features, Deep Space Battle VR did come with some basic tech gaffes as well. While the graphics and controls were willing to dynamically flip their orientation for me, so I could plug in some headphones and whatnot, the text on the menus and the tiny narrative text preceding the missions would not. Upside down text doesn't make the game unplayable in any way, but it was a bummer. Someone over at Archiact was clearly jazzed about writing this space opera story, and even if it was oriented correctly, the text was difficult to read due to a space-age font choice. Come to think of it, while it was really helpful for each menu button to slowly fill up with color to signal its activation, the color chosen was a pale yellow that was not enough of a contrast from the thin white text. And then there's the obvious problem: without button controls of any kind, there's no way to control your rate of fire, no weapon selection, no ability to increase thrust or do any real active playing. It's just mostly a "look over here, now look over there!" affair. That would be a fun enough diversion, though, if the missions weren't timed.

Yeah, timed missions. When your neck is your joystick. Remember when we were talking about common sense earlier? Yeah. 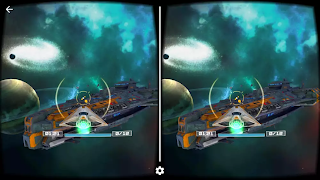 My big gripe with this experience probably has little to do with the game itself and is the plain drawback to VR besides the increased chance of a pounding headache: the 360 degree battlefield is easy to get lost within. Maybe this is just the conceptual problem with having a space setting and then having the entire game revolve around a human head's sense of orientation, where up and down matter a lot and the limits of your neck kill your ability to turn further than 90 degrees. without room to spin around in place like a toddler.

It's a worthwhile diversion, especially if you got a pair of goggles on hand and a few minutes to screw around. Maybe this kind of thing would make a great party game someday. And I'll keep messing around with VR once in a while, but I can't say I'm exactly hooked as of yet.