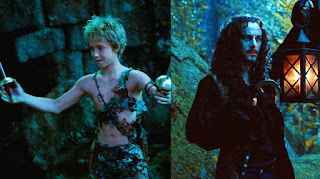 The Peter Pan story has a very colored history of feature adaptations. Disney's animated version in the 1950s has done quite a bit to keep the property alive, and I'm betting Steven Spielberg's Hook grows in prominence as my generation continues into parenthood and tests it out on our kids. Though the copyright ownership of the original story has had a lot of contention, it hasn't stopped sequels and spin-offs from being exempt, and therefore we get hot garbage like 2015's Pan, a prequel...of a sort. But back in 2003, Sony was granted the screen license to the characters and original story, and set about making the most faithful adaptation of the Barrie classic as possible. This made perfect sense, as 2003 was right in the middle of an era where family literary adaptations had suddenly become a huge deal thanks to the Harry Potter juggernaut and Peter Jackson's Lord of the Rings films.

As for 2003's Peter Pan, it's actually really well done. Director P.J. Hogan gives Neverland a sort of high-contrast gothic aesthetic, but shies away from dragging the action into the epic vistas of Jackson's Middle Earth or Gore Verbinski's bombastic nighttime skulduggery. It reminds me of the Fire Swamp sequence from The Princess Bride, only with a much higher production value. And the story is presented with the inclusion of Barrie's initial sense of tragedy from the source material that is often removed in favor of doubling down on sentimentality. It's a really dark take on Peter and his refusal to grow up, and not "dark" in the edge-lord, 1990s comic book sensibility that Pan shot for. And the real novelty of seeing an actual adolescent boy play Peter--never before done on screen to that point--opposite a girl his own age, gave a lot of weight to the romantic implications between Peter and Wendy. Plus, you know, Jason Isaacs played the duel role of Mr. Darling and Captain Hook. That alone is worth a viewing, I assure you.

It sounds like a really bulletproof scenario until you realize that the film was released on Christmas, 2003...against The Lord of the Rings: The Return of the King in its second week of utter domination. The very trend that signaled this faithful adaptation's creation is the very same unstoppable force that made Peter Pan dead on arrival. It only packed away $11 million for the weekend, and a $48 million domestic total gross. The Pan story did a fair bit better overseas, with an additional $73 million, making the total gross just under $122 million off a $100 million budget. Ouch.

December 25, 2003 was a packed release date, with Steve Martin's feel-good family romp Cheaper By the Dozen bumping up against Oscar contender Cold Mountain and John Woo's  sci-fi thriller Paycheck. That's to say nothing of Return of the King's $50 million return and Mona Lisa Smile, which in its own second week edged out Peter Pan by less than a quarter of a million. That's such a diverse slate, with fuzzy family comedy, austere period dramas, a Ben Affleck sci-fi adventure, and of course one fantasy epic that turned out to be the biggest film of the year, both critically and commercially. It's like a weekend designed to kill a live-action Peter Pan film, holiday multiplier be damned. Why did Sony feel that the holiday slot was worth the gamble?


If we roll back two weeks, to the Dec. 12 weekend, there's a much different story. Sony won that weekend with their middle age-aimed romantic comedy Something's Gotta Give, and the other new releases were the Farrelly Brothers comedy Stuck On You and teen-oriented romance Love Don't Cost a Thing. The rest of the top ten was rounded out by The Last Samurai in its second week and holiday-themed comedies both benign (Elf in its sixth week) and ribald (Bad Santa in its third week). On one hand, this is a much smaller weekend, and even if Peter Pan could have beaten out the other family offerings it likely wouldn't have a higher weekend; Something's Gotta Give topped it with only $16 million. On the other hand, it might have had more longevity after claiming the top slot. It's dicey, and swapping out Something's Gotta Give to Christmas would probably tank that film.

Let's roll back even further. I put forth the notion that if Peter Pan had released on Thanksgiving weekend, Nov. 26, it would have taken the Number One slot and crossed at least $20 million in the three-day weekend. With a five-day weekend, no Lord of the Rings film to contend with, and a box office ruled almost completely by November holdouts like Elf and Gothika, it had a much better chance. The big release that weekend was Buena Vista's tepid The Haunted Mansion, which won the five-day weekend with $34 million, but tied with Mike Meyers' Seussian boondoggle Cat in the Hat for the Friday-through-Sunday race at $24 million each. It would not have been a sure victory for Peter Pan, but I'm confident it would have crossed $50 million domestic easily with no direct competition in fantasy adventures for another week.

Ultimately, the release date might have been a secondary or tertiary problem with Peter Pan's box office woes. Chiefly, it was just a really damn expensive production; Haunted Mansion actually only came in at a reported $90 million, while Cat in the Hat was $109 million. And those two required a ton of special effects and big-name salaries. Hell, Return of the King technically only lists a $94 million budget, though really it's more accurate to say the entire trilogy shot for around $280 million, and Return was one third of that. But the other big weight holding down Peter Pan was a lack of bankable stars. Will Ferrell's bug-eyed mug raked in $173 million domestic with Elf, just off a $33 million budget and his star power. It's a losing battle in late 2003 for unknowns Jeremy Sumpter and Rachel Hurd-Wood to headline a film against Eddie Murphy, Mike Meyers, or Tom Cruise in his white savior film. It was likely decided that if the adaptation could take down a bankable star's face on a poster, it would be a 2003 Steve Martin. And, yeah, that sounds a little more reasonable, but Cheaper By the Dozen still opened with $27 million. And it didn't cost $100 million, either.

See, I find this particular case interesting because Peter Pan is entirely a product of the times. Without Harry Potter and Lord of the Rings, there's no way this film gets the budget or holiday release it got. Sony just wouldn't have the confidence in it otherwise. And oddly, these are the reasons it lost so much money for them. That, and Sauron's endless hordes.
Labels: blog treated and released