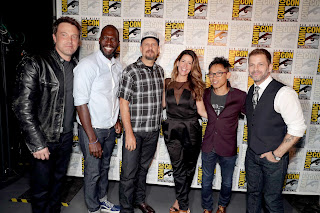 Some news is starting to brew from the battered trenches of Warner Bros. and their fledgling DC Extended Universe meta-franchise. First off, those pesky rumors about Jake Gyllenhaal taking over the role of Batman if Ben Affleck departs have resurfaced again. Also, as of today Jon Francis Daley and Jonathan Goldstein have been given the hot potato that is the director's chair for Flashpoint, the standalone Flash film that has lost two directors so far. As a matter of fact, since the above photo was taken at the 2016 San Diego Comic-Con, David Ayer has departed the "maybe" of a Suicide Squad sequel or spin-off for greener (or certainly splotchy orc-colored) pastures at Netflix. Ben Affleck dropped down from being the writer/director/star of The Batman to merely the screenwriter and titular Batman, then to just starring in the standalone film. Now, even that is uncertain. Meanwhile, Rick Famuyiwa followed Seth Grahame-Smith out the door from a Flash movie, and Zack Snyder's time as the architect of the DCEU is likely on a timeclock as well. Of the six people photographed only eighteen months ago, only Patty Jenkins and James Wan are a lock.

Cards on the table, I think hiring Daley and Goldstein is a really dicey idea. The two have only one feature under their belts, the tepid soft reboot of the Vacation comedy franchise starring Ed Helms. As a lot of press is eager to point out, they did write the screenplay for Spider-Man: Homecoming, which is a promising detail, but I counter that with the sad fact that they also wrote The Incredible Burt Wonderstone. The Flashpoint arc from the comic books, even loosely adapted for the screen so it fits into this odd stew that WB has concocted, is a dark and very complicated time travel story that might be a lot for the Horrible Bosses screenwriters to handle.

I lament the fact that no one over in the WB/DC camp seems to understand where they are at in the life of this meta-franchise. They seem to be operating off this codswallop notion that they are hiring visionary, stylish, hip directors to carry out singular visions in each entry. That was the purpose of the 2016 Comic-Con director summit, to counter Marvel's open fear of straying from their homogeneous series' tone by showing how many sharp, creative, and very different sensibilities they had in charge of each chapter of the DC slate. Unfortunately, after five films (three of which were credited to the same director), it doesn't read that way. It looks more like this shared continuity is standing on its last legs, and the standalone Aquaman, Flash, and Batman films need to strike true or the whole thing might just get scrapped.

With that in mind, I jotted down some ideas for what the gameplan should look like at this point if this were an organized, savvy affair. But, hey...who the hell am I? As an old colleague pointed out recently, the very notion of a "How would I fix this billion-dollar franchise" conversation is always built on a subtext of ironic arrogance. Obviously, the hundreds of experienced professionals who are actually tasked with salvaging this intellectual property are there for a reason, and I don't presume to have any real magic answers. This is just my idea stemming from the thought experiment of "Hey, this is a mess, how would you clean it up?"

For starters, WB needs to get a frapping grip on all the touted projects and names they float to the press, because when none of those films make it to their release slate, that makes them look really stupid and delusional. Right out the gate, let's maybe abandon some of the redundant or confusing projects, like this separate and standalone Joker project that does not feature Jared Leto. I'd also give Joss Whedon's Batgirl the ax myself. DC has exactly one thing going for it at the moment, and that's Wonder Woman proving that a female-directed, female-starring superhero film is a potential commercial and critical hit. The easiest way to evaporate all the good buzz from that is to make a Batgirl film written and directed by the Joss Whedon who recently was outed as something of a cad at the very least, whose own draft of Wonder Woman was regressive to say the least. How about we split the difference and give Batgirl to Karyn Kusama, who could easily give a badass action film a touch of authentic teen girl angst. Like most female directors, she's been largely marooned in television work since her last big break, 2009's Jennifer's Body, failed to do the impossible and give Fox more Juno-like box office numbers.

Step two: with Wan's Aquaman already complete, the priority is Flashpoint. Conveniently, a film version of the Flashpoint story arc can wipe the slate clean on anything already established that needs to be jettisoned, much like X-Men: Days of Future Past was for Fox. For instance, if Ben Affleck does bow out of the franchise, Bruce Wayne suddenly appearing younger, more Gyllenhaal-shaped, and likely less of a dick would be a narrative possibility. Also, little things could be corrected, like Jimmy Olsen being retconned back into a photographer and/or Superman's buddy instead of the world's crappiest CIA operative who got his melon blown off. But...boy, this Daley/Goldstein news about Flashpoint is such a big dice roll. If I were the king of Warner Bros, I'm dictating that the complicated retcon movie be handled by someone seasoned in genre blockbusters, who I trust with arguably my biggest IP in my quiver. I'd probably ask David Yates to step away from the endless series of Harry Potter spin-offs we have planned so he could help.

Yates directed the entire back half of the Potter franchise for WB, all of which were huge box office successes, involved dozens of A-list performers, lots of special effects, and a rabid fan community scrutinizing his every adaptation decision. I say give him Flashpoint as well as an option for a Justice League 2. Handing the reins of the entire meta-franchise over to Yates would be equivalent to Kathleen Kennedy's recent Star Wars strategies, handing the responsibility to seasoned veterans when the need arises. Yates even managed to imitate the visual style of Alfonso Cuaron's Prisoner of Azkaban entry to a degree, so his Flashpoint could conceivably bridge the gap between the Snyder era of the DCEU with whatever comes next.

Obviously, Patty Jenkins' Wonder Woman 2 would come next. Don't fix what isn't broken. But I'd say it would be easy enough to fix what was definitely broken by pulling in Lexi Alexander to take over for Ayer on a Suicide Squad sequel, or a Harley Quinn standalone, or some sort of Batman side-franchise. Her action sensibilities and tone from Punisher: War Zone would be a great fit for the sort of gonzo reality and humor that Ayer established. Matt Reeves is still set to make The Batman, which will hopefully do some salvaging of the character's philosophy and expand his setting beyond the remote underground bunker sunk into a reclusive lake.

I'm going to be honest, here. I don't know what to make of the current Cyborg storyline, or even if that character could carry his own film at this point. I'd like to see one, possibly after featuring him heavily in Flashpoint to continue to build his position within the rest of the team. Meanwhile, after Flashpoint lands, Superman will be long overdue for a standalone story of his own. I, for one, would love to see some of the wide-eyed optimism and gee-whiz heroism of the character return, and I can think of no one better than the underrated Joe Johnston, who made both The Rocketeer and Captain America: The First Avenger. If DC wants to poach from Marvel, Johnston would be a much better pull than Whedon at this point. And it would be quite relevant to the "Rebirth" arc going on in the comics right now.

Looking ahead, DC still has the Green Lantern Corps film on the back-burner, but they've been reticent about the character ever since his 2011 debut. Granted, it's a different comic book film landscape. We live in a post-Guardians of the Galaxy and Thor: Ragnarok world now, and Green Lantern is DC's best counter-punch to that weird, exotic cosmic setting. Being that the Green Lantern is something of a space cop, and being that this new film's title hints at the idea of a two-hander with Hal Jordan and Jon Stewart co-existing in the role, why not get the master of buddy-action films, Shane Black, to write and direct a cracking sci-fi detective story. I'd watch Lethal Weapon in space. Like, a lot.

I'd also like to see, further down the line, some exploration of some of the lesser-known (to general audiences) fan favorites, such as a Hawkman and Hawkgirl feature. That would be a perfect way to bring Michelle MacLaren back to the fold after she left Wonder Woman over "creative differences." Her work on "Breaking Bad" and "Game of Thrones" demands a big budget spectacle with some complicated character work, and the themes of cyclical fate surrounding Hawkman and Hawkgirl, along with their more Burroughs-esque iconography, would suit her. By the time we get to an Antoine Fuqua film version of Green Arrow and possibly a Robert Rodriguez CGI carnival of oddities with Martian Manhunter, WB could conceivably crank out one or two of these films every year, and I doubt fans would complain about it.

Let's see, since I'm the king of everything in this made-up universe, I'll dictate some other stuff. Remember when DC teased the hell out of exploring their more off-beat, urban fantasy characters for a Justice League Dark pitch? How about we split the difference and tap Jennifer Kent, director of The Babadook, to explore Swamp Thing or Hellblazer? I'll do you one better. John Singleton would make one hell of a film out of The Question, especially if building on the Denny O'Neil run of the character.

This is just what I had on hand as hastily spit-balled ideas. The fact that Marvel and Disney are strutting into 2018 with not just a Black Panther film breaking presale records, but a sequel to an Ant-Man film, for crying out loud...if WB and DC want to keep their franchise from capsizing they need to start either actually swallowing their own marketing and hire some seasoned, veteran directors that have unique voices, or they need to start digging deep into the endless bag of material and offer something that audiences can't get from the competition. Or, preferably, both.

tl;dr - The hiring of Daley and Goldstein is a weird direction to take a comic book meta-franchise, especially with all the more experienced, more appropriate talent available. And WB's lack of organization or confidence in the full DC compliment of characters and settings is why they are finally getting around to starting this cinematic universe, five films and five years in.