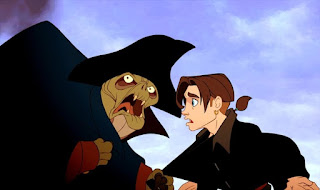 I might be one of the few, but I continue to mourn the death of Disney's traditional hand-drawn animation studios. While the revamped and reinvigorated Disney Animation Studios, now a purely computer animation house, has had a staggering success rate the last few years and arguably has surpassed their sister studio Pixar for project quality, there will always be something missing from the final products for me. I'm an old-fashioned guy. I like westerns, and fountain pens, and to me there's some magic left in the hands of an artist and the texture and definition of real ink.

Clearly, I'm in the minority on that. The dismantling of the traditional animation wings of the movie studio was a painful but necessary process from about 2000-2006. During that time, a handful of projects were summarily retooled, abandoned, marketed poorly, and lost in the shuffle as Pixar, Blue Sky Studios, and DreamWorks Animation dragged the House of Mouse kicking and screaming into the CGI era. Our subject for this entry, Treasure Planet, was released on Thanksgiving weekend in 2002 and was quickly forgotten.

The film itself is a sci-fi adaptation of Robert Louis Stevenson's classic pirate adventure, taking place on stylistic starships and swapping out peg legs for bionic implants, mad castaways for deprogrammed androids, and stormy seas for supernovas. I hadn't seen it in a very long time and I have to say, it's a gorgeous production. The designs are meticulous, but still organically rendered, with hand-drawn characters and foregrounds painted onto digital backgrounds to give a real sense of scope. The cast, which includes a pre-baritone Joseph Gordon-Levitt, Emma Thompson, and David Hyde Pierce, is inspired and suitably dignified. While the script is undeniably thin, and the characters get little time to develop, the adventure has a surprisingly robust pace that is seldom found in neo-classical family outings. It's not a secret classic, but it's much better than its complete lack of reputation might suggest.

But alas, a Disney film about space pirates did not do boffo box office business. For the three-day holiday weekend, Treasure Planet only scared up $12 million and finished fourth behind three older releases. Against a $140 million budget, it closed with a total worldwide of only $109.5 million. Okay, that's not all that surprising when you consider the nasty transition era from whence it came. Disney was posting bad numbers on traditional animation since Fantasia 2000, which had a similarly long production cycle and abnormally high budget. It also didn't help that Treasure Planet was a project held by the Burbank arm of Disney Animation, which was effectively liquidated in March of '02, eight months prior to the release.

But consider this: five months earlier, Lilo & Stitch releases to a $35 million opening weekend and does splendidly both foreign and domestic, raking in $273 million total gross. So, we can't exactly blame the rise of CGI animation at Disney solely. While Lilo & Stitch skews a lot younger than Treasure Planet, and features musical numbers and cutesy merchandising opportunities, that mid-June release date is smack in the middle of idle summer time for schoolchildren, and it released as counter-programming against Minority Report and the second week drop-off of The Bourne Identity. There was family-friendly cash available.

Meanwhile, Treasure Planet released on a holiday weekend usually dominated by football and supermarket queues, and it lost out to Harry Potter and the Chamber of Secrets (in its third week), James Bond in Die Another Day (second week), and Disney's own The Santa Clause 2 (in its fifth week). Ugh. We're talking about three or four films that arguably draw the same family audience, and three of them are sequels to either a long-running cinematic institution, a modern holiday classic, or a worldwide multimedia phenomenon. It was just a really bad call.

So, let's roll this back a month. The weekend of October 25-27 was kind of a cesspool for new releases. Paramount won the weekend with MTV's Jackass: The Movie, with a frankly staggering $22.7 million, while The Ring took the year's horror genre honors with an impressive $18 million in its second week. Third was Warner Bros. craptastic voyage Ghost Ship, with $11.5 million, and then fourth was Sweet Home Alabama in its fifth week, with only $6.5 million. A fifth-week release of a romantic comedy did measurably well as counter-programming against horror and...well, a bunch of dumbasses lighting each other on fire, which will always win. You know what is entirely missing on that slate? Family adventure films.

Yeah, I know. Family adventure films in late October? Not so much in 2002, or really at all in the decade before that. It would be another year before pirates came back as an adolescent aesthetic cultural marker thanks to Johnny Depp and Hot Topic, but imagine if this steampunky animated beauty had landed right before Halloween. It could have been a stand-out. Keep in mind that the same late October weekend has been good to 2004's Shark Tale, which took the number two slot in its fourth week, 2011's Puss in Boots, which won the weekend and nabbed $34 million, and somewhat similar stuff like Where the Wild Things Are (2011) and Goosebumps (2015) have broken $15 million on that weekend in their second week. Wait just a minute, here. If all of those did well in the second week, let's roll it back one more week for Treasure Planet.

Sure enough, October 18-20 of 2002 had The Ring opening and crushing the box office against Sweet Home Alabama's fourth week and Red Dragon in its third. How empty was this week? Well, My Big Fat Greek Wedding took the next slot down in week twenty-seven! There you go. If Disney could have held it together and cranked out Treasure Planet for a mid-October release, it would have been the only family-friendly option and could have sailed through the next two weeks on smoother tides. Instead, Disney had to play Pirates vs. Wizards, with Tim Allen's Santa standing in the background like the jackass he is.
Labels: blog treated and released