It's certainly a Monday, which would seem to indicate that the two-day love affair with food and sedentary behavior is over. I came back strong enough, holding my own through the workout, and somewhat disciplined on the food front.

Saturday was a bit of an issue: wedding cake, sparkling cider, and a big plate of tamales (because it was that good of a wedding). I like to think I kept myself to a reasonable amount of calories, but I really didn't feel like doing so. My suit didn't really fit, you see. I pulled on the jacket and felt like David Byrne in his "Stop Making Sense" suit. The pants had to be cinched up like an old-timey bank robber's sack of loot. It was uncomfortable, but it was a nice, tangible illustration of how differently shaped I am since it was tailored for me some six years ago.

I do have a new recipe, and it's great for you vegan folks: a creamy pumpkin pasta. Really easy, really cheap, and substituting dairy product for coconut milk. Mine wasn't vegan; I added some chicken bits (sauteed in vegetable broth) just for a little added satisfaction. I know it's not really the season for it, and I know that pasta isn't exactly a good "rewire your food habits" entry, but dang it...it was whole wheat pasta, at least! I'll easily make up for it by making the cabbage soup for dinner tonight, with no carbs at all.

That's something I have to watch out for, though. This desire to balance the books on calories, carbs, sugar, oil, fat, lack of exercise, or to punish myself for any of them...that just stinks. It's a fool's errand. Discipline is important, self control is important, but I'd be lying if I said I feel like being the food police for anyone. Including myself.

My stationary bike ride was abbreviated today, only 20 minutes, but I saw a definite improvement in my intensity. I still don't know what the measurement is for distance on that machine, but while last week I was hitting 5 (mi...km...in...?) in 20 minutes, today I hit 6 in the same amount of time. So. That's good! And it gave me a bit of pep for the day. That and stepping onto the scale to see that I had not, indeed, gained back the pounds over the weekend that I had recently lost. I'm still holding steady at 20 pounds lost. So, expect more of these repetitive, bitchy diary entries because whatever I'm doing, it isn't hurting. 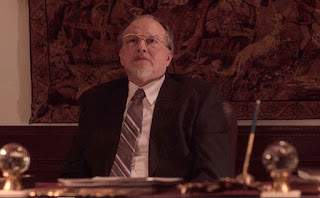 Here we have an episode that makes the distinction between loyalty and trust. It's as wide a gap as the one between facts and truth. Off the heels of the news that the Rezidentura has an information leak, the game becomes a scramble to hunt down the mole. Just as Stan Beeman put it on the racquetball court, your enemy will lose if you make them go too fast and make mistakes. Claudia (and those further up) make a pretty big mistake in failing to trust Philip, who has been nothing but loyal in action to the cause, and nothing but loyal and trusting of Elizabeth, who practically ratted out his passing idea to defect from weeks ago.

The daylight snatching of Mr. Jennings from a public phone booth, however slapdash and amateur that sounds, could have very easily been the show's writers introducing a rogue third element in the form of a meatheaded CIA operation, but I suppose that's more of a Season 3 development. It was a little disappointing that it was something as mundane as Home Office paranoia, but it helped to highlight some key differences in the members of the Jennings family that have gone mostly unexamined.

Philip is taken by surprise while speaking to his own mole inside the FBI, Martha, and to his credit he maintains his cover character even when bound and interrogated. His knack for deception is unimpeachable. But Elizabeth hears and investigates a creaky floorboard in the house. She goes armed with a kitchen knife, by far the more defensively aware of the two. This division of their skills hasn't gone unnoticed, either.

Philip takes a sickening beating from a thug with a phone book, no mean feat. Elizabeth's torture, meanwhile, seems less physical and more psychological, with pictures of the family hung up like an indictment in her makeshift cell. Their captors make another mistake when Elizabeth is trotted out in front of Philip as incentive to get him to talk. The growing bond between them has a measure of respect attached. Seeing each other's eyes unifies them against their captors and pretty soon, they are prepared to die before talking, at least until it's revealed that Elizabeth's diligent report about her husband drew suspicion in the first place. The seeds of distrust between Philip and Elizabeth sowed by the mock capture might be irreparable. But man, the both of them beating the holy hell out of their handler and her brute squad is an absolute game changer, plot-wise. That is going to have some formula-changing consequences.

For now, Philip is physically hurt after the ordeal, and emotionally destroyed by what he feels is a betrayal from his wife. Elizabeth, meanwhile, is much more shaken by the betrayal from the KGB. She showed loyalty, and expected trust. Philip showed trust in her, and his lack of absolute loyalty bit them both. Though such a small scene in the aftermath, with husband soliciting jewelry from his wife to give to Martha, his asset, is about the coldest fucking thing I've ever seen. The pain of that moment obliterated any torture for sheer impact.

Speaking of hard impacts, The Jennings children are testing their own trust and loyalties when forced to hitch home while Mom and Dad are interrogated. Boy, the second I saw that sixer of beer come out of the trunk of their good samaritan's car, that's a red red red red red flag. Henry thinks so too, and sees plenty of other red flags Paige willfully ignores in her quest to fit in with a cool adult. That's a dangerous precedent, as Philip's ability to "fit in" in his American surroundings is what got all four members in their predicaments this outing.

Henry cracking that bottle over the dude's head was a pretty good narrative move. The guy's rants about God and someone to keep us on the straight and narrow, and to call us on our bullshit...it seems headed somewhere, but there's a lot of meandering nonsense. Paige is right, even if he wasn't going to do anything horrible to them, he was a creep. That's really all we need to know. Also, Paige and Henry are now keeping secrets from their parents, starting with their grim pit stop. It's interesting that young Henry seems to have their mother's fierce defensive qualities, while Paige desires to blend in and become familiar with new allies, much like Philip.

Stan Beeman also has a background in blending into a distrustful crowd. The former undercover agent seems sympathetic to Nina's justified fear once it becomes clear how fast she'll be discovered, but only to the point where he can exploit it. The episode's title is a vaguely sinister callback to Stan's use of the Russian phrase. Again, when confronted with how close the KGB is to Nina, he repeats it again, twice, in his serene way.

To their credit, the FBI Counter-Intelligence team are not complete dopes, and have connected Udacha's execution to the blueprints of the defense system and the Rezident's meeting with his asset. It doesn't take long for them to piece together that the KGB is aware of their leak. Stan's plan for getting Nina out involves her getting into way more trouble, and building the trust of someone to the point where his absolute loyalty won't be enough to save him.

Martha, Philip's source inside the CI team, is an infinitely better mole than Nina. Because she has no idea she is a mole, or is in danger. By extension, Philip is much better at handling assets than Beeman. At least, we think so. Beeman uses fear and coercion to get bigger information, even if the Directorate S tactic keeps an asset going longer without being noticed.

Something else similar: Philip's repurposed jewelry and Stan's use of confiscated diamonds to hang Vasili are both fairly coldblooded. Does Beeman realize that he just condemned a man to death? Maybe, but it's easily circumvented when one considers that the leak inside the Rezidentura was, in fact, Vasili himself. He had all the information, and put his trust in Nina very recklessly. To Stan, that makes it fair play, and it was "a tough day, but a good day."

I don't think the Jennings household will agree to it being a good day, but it was definitely a tough one on all sides, and it was extremely captivating to watch them find a way out.

-Philip's explanation for how the KGB could have a mole: "It's one of the things that happens when people are involved." I mean...yeah.

-The baseball game on in the background of the opening scene in the Jennings house is actually the 1981 Baltimore Orioles season opener, against the Kansas City Royals, pinpointing the date as April 10, 1981.

-Quality Spy Tradecraft: Nina's camera is about the size of a harmonica, which is microscopic by 1981 standards. By 1990, those were the cheap plastic cameras given to children on vacation.

-Anachronism Alert: Paige and Henry's new day-drinking, duck-feeding buddy says, "It's chill," which I'm sure wasn't a thing before my lifetime.

-Philip's silent, sighing dread just before crashing the car as a cover story is such a banal reaction to having to do something unpleasant.