When I was a teenager, and I had physical obligations such as a football practice, or a gym class, or something in the theater that required exertion of some kind, I'd always arrive home with a ravenous hunger. My 4:00 pm weekday ritual, if there was no practice or rehearsal, was melted cheese, leftover steak, reheated pasta, and the occasional slice of pie, usually washed down with a liter or so of sugar soda pop. This is, honestly, the reason why I'm turning 30 and worried about my weight and my health. I got into an eating rhythm, and Gloria was right...eventually, the rhythm is going to get you.

It's even coming after me now. After hitting the gym, my first impulse is to raid the fridge, and take no prisoners. From what I've gathered, this is normal. The human body looks to refuel, that's only natural. Real athletes, serious fitness people, the kind that do impressive things, they'll tell you that it's the rational, adult way to go about this. Going for a 5k run? That's fine! Eat a sandwich. Eat three! You'll need it. Where do you suspect the phrase "carbo-load" came from? I remember distinctly that my brother's cross country team would kill trays and trays of lasagna and spaghetti for hours the night before a meet. It makes sense.

But when you spend eight hours of your day sitting? When your fuel needs consist of a thirty minute stationary bike ride and a few trips up and down the stairs? No. This is my body trying to pull one over on me. "I need fuel!" Yeah, the same way my laptop battery dies a horrible death if I leave it plugged in all the time, there's a time when the vessel is just never satisfied no matter the situation. So, the focus becomes how to trick the monkey into thinking it has been fed. These mixed metaphors are slipping out of my grasp, so let's move on.

My left leg gave me problems again, and I wonder if maybe one of my legs is longer than the other. Why else would I unconsciously favor one over the other? I do fine on the bike, but it's that dang elliptical that causes this. Thank goodness I never use the treadmill. It would probably be twice as apparent. My endurance seems to have improved, even if I'm so totally over exercising by the time I hit 13 minutes, still. I'm not learning to enjoy it, just learning to do it anyway. In retrospect, it's the same feeling I have about brushing my teeth, it just lasts fifteen times longer. 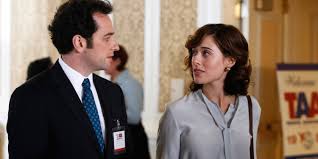 Espionage lives and breathes through the power of perception. If an asset believes they are giving information by choice, they may be more eager to do so, even if their choice is a complete illusion.

Ever since last episode's frantic mole hunt, friction between Elizabeth and Philip has gone beyond palpable and escalated to outwardly caustic. But tellingly, Elizabeth is still jealous that Philip is going out of town to see his long-ago ex. This is less a "someone might die" feud and more emotional marriage volatility. But that might be even more alarming, with this couple.

Not only does Elizabeth get the worst wig of the episode, she also gets the crap assignment of trying to scoop up the remnants of Udacha's assets. Sanford Prince, her new ward, is over $20,000 in the hole from gambling, and would probably welcome a bullet to the skull over getting his legs broken. This is the simple problem being addressed in this episode, with Elizabeth simply buying Prince's debt and using the power over him to ply him for defense system secrets. Sure enough, when Sanford Prince asks if he even has a choice about working with the KGB, the answer is obviously no. But the illusion of choice is right there, if he needs it.

As the Virginia and Ottowa chapters of Directorate S, Philip and Irina, the love of his life before the KGB, are in New York to stop Andrzej Bielawski from getting the word out about Polish independence. The revolutionary boasts of an independent government free from Moscow's rule, but he cannot be killed because he helps maintain the fiction of a free Poland, which is useful. Since the USSR was not a traditional fascist regime, the facade of total control was less appealing than the facade of voluntary collaboration and the illusion of choice.  Bielawski's plans are foiled once Irina fakes a sexual assault and battery with Philip's help, so a job well done. Ironically, the Reagan administration dumps their support of "the Priest" for fear of the KGB finding out that a rapist is leading the American-supported Polish independence movement...which the KGB engineered, purely out of illusion.

Philip, meanwhile, is tongue-tied for the first time since we met him. He can't even put together more than one complex sentence in the presence of Anna, who is really Irina. Like long-lost childhood sweethearts they play the catch-up game...married? Yes. Children? Yes. And that seems to be it. The last lingering remnants of his life from back when he was fresh-faced Mischa have been filed away in an orderly fashion by the people who fabricated Philip's life. I suspect he will come to resent the KGB for their power of illusion.

Elizabeth's own resentment boils over while  trying to commiserate with Stan Beeman's wife over their husbands' distance, but for now she gets a dose of an outside perspective. Elizabeth thinks of the Beeman marriage as something more "real" than her own, but Stan's wife Sandra openly envies the Jennings setup. The fact that Philip and Elizabeth have been a functional business partnership for fifteen years might demonstrate a more honest and open relationship than Stan and Sandra's many years of communication breakdowns and emotional distance. "Marriage is hard," Elizabeth deadpans, likely thinking of how much easier the spy partnership is than the spousal one, but Sandra has hit on what we the audience already know...the job is what brings Elizabeth and Philip together, and that's an encouraging thought.

Less encouraging, and frankly less interesting, is FBI Agent Amador's quest to get Stan to drink at the bar and then have sex with a stranger. I don't have time for this, honestly. It's a clumsy narrative line to get Stan into bed with his KGB source Nina, which itself makes little sense from her side of things. I'm hoping Nina is really smart and is using this chink in Captain America's armor as her method of safe passage out of the Rezidentura. That's the only end-game that will salvage this C-plot. And that very well might be the case, since Stan, who hopelessly clutches the idiot-ball this whole episode, immediately starts asking his superiors about extracting his informant. The senior agent practically laughs him out of the room, because duh, Stan. Assets remain assets until they are no longer useful, and that's usually when they have already become dead.

Despite the exciting emotional high points coming elsewhere, the real crux of the episode sits in two big developmental scenes. First, Philip's world is utterly rocked by the idea that his former life, as Mischa, might still be available to him. Irina is echoing the doubt, the assimilation, and the guilt that Philip has been feeling since the pilot episode, and she suggests that they just disappear together. Oh, and by the way, Philip, you fathered a child in Russia with Irina just before leaving to start your life as one of the Americans. I can't help but think these two were assigned to each other on this op purely as another test of Philip's loyalty. Maybe I'm starting to become as paranoid as a Cold War spy just watching this. It's more emotionally powerful if Irina is genuinely talking defecting and reconciling, but I know television. Television feeds on the kind of reveal that would show Irina to be the latest in an ongoing campaign to fracture Philip from Elizabeth, and from his job. That's kind of interesting, from a Nineteen Eighty-Four standpoint, with the KGB developing their own brand of disloyalty so as to weed it out with ease, but it would still bug me. The question of her intentions is important, though. Even Philip is questioning the reality of her offer. He asks Irina, before letting her presumably fall off the map, if their son is even real. "Only duty and honor are real, isn't that what we were told?" Everything is an illusion, a trap, a honeypot. That's what these spies have been taught since they were young idealists.

The other fulcrum of the episode is a similar meditation on what is "real" and what isn't. Elizabeth reaches out to Philip by calling his hotel room late at night. On the surface, it's just long-time partners checking in. But quickly, Mrs. Jennings decides to come stepping into an equal commitment to their romantic relationship by just telling the truth, that she misses her husband and wants him to come home. It's a big step for her. It's too bad he's busy being pulled headlong back into his old relationship, with Irina staying the night in his hotel bed.

Elizabeth proclaiming that she wants their marriage to be "real" really goes over the line into on-the-nose territory, but I forgive it because it's monumental character growth at a natural pace. It's going to complicate things, especially since Philip decides to keep (what I would call) his first instance of actual infidelity a secret, along with his surprise son. Spies can keep secrets, but how long before this one comes out? Especially if Irina goes off the map? Who will have to hunt her down on behalf of the Motherland?

-Keri Russell's "I'm sorry I didn't kill you" to Claudia purposefully lacks conviction. The character is blustering, and the actress is conveying that subtext. Martindale's rejoinder of "Better luck next time" is dripping with venom. This is some hardcore acting, folks.

-The return of Charles Duluth, secret Soviet, as a TV talking head and a Reagan administration insider is an amusing piece of world-building.

-Irina speaks Polish for her cover, and since she lives in Ottowa she likely speaks French as well as her Directorate S English without accent, on top of her native Russian. That's impressive.

-The Jennings children are quietly playing chess at the end of the episode, whereas they begin the episode fighting over choice in television program. This could parallel their parents easily, if Elizabeth has to start working to hunt down Irina in secret.