Seems like it was inevitable, but I finally might have overworked myself in the gym. I've had knee problems since high school football, but it has been a long time since I've felt that much creak in my joints and throbbing pain as I felt yesterday. I don't know if I stretched wrong or if it's merely dehydration. According to my wife and the stuff she reads, about nine hundred percent of all physical ailments are just a reaction to low water intake. Who knows. I bet I drink a big bottle of water and it'll just give me a stomach cramp to go along with my fancy new limp in my walk.

I took a lighter workout yesterday and today as a result, and it wasn't pleasant. For starters, I had to break up the final episode of "Lost in Space" into two viewings, but also I just felt weak and sluggish both days. Maybe this is that point in a weight loss where you're supposed to consult your physician, or maybe that was actually two months ago before I got started. Not sure.

At any rate, this week has been a challenge for both exercise and diet. I've been finding myself ravenous late in the afternoon after getting home from work, and because pay day is at the end of the week, the options for snacks have dwindled. I've eaten an irresponsible amount of peanut butter with my kids, as well. When everyone is still somewhat sick in the house, it gets really hard to not say, "Aw, screw it. We're having hot dogs, crackers, peanut butter, and ramen noodles for dinner." Hopefully not all mixed together. After a good grocery run, I feel like I can get back on track. I did try almond butter for the first time the other day, and I have to say that I liked it. It was filling, and conspicuously less saturated by sugar.

And now that the good weather is creeping in (here in Oregon, though it's the middle of May, we're just drying out from the constant rains and pulling out our Spring wear), I'm eager to lose all the weight possible. Not just because I want to fit into my long-dormant shorts and other summer stuff, but also because I want to go out and exercise more in the real world. Meat-space, as the kids probably don't call it anymore. I want to ride a bike around the lake that sits only a few miles from home. I want to try the famous trail within ten miles from me that routinely draws tourists all summer. But here's the rub...I have to lose more weight in order to fit on a real bike. Yeah. How crestfallen would that make you? I have to exercise for months in order to not break a bicycle when I eventually park myself on it. Great. Grand. Beauty.

Well, on that sunny note, I have it on good authority that at least one faithful reader is awaiting the final word on our favorite Robot show that also has that nifty family on it. 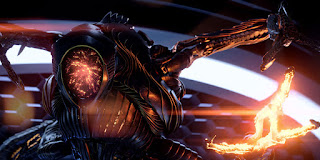 Funny enough, this show landed on Netflix right near my birthday, and I joked months prior that even the fine folks at the streaming giant remembered to get me something I knew I'd like. I like this show, a whole bunch. It's fun. It's cool. It's not half as dense as it could have been, which I actually put in the win column. This show should not be a meditation on the nature of the human spirit or a rumination on reality or anything heavy like that. It should be a fun show where a family of smart people fly through space dodging aliens and black holes. Thank goodness someone realized that.

This episode resolves the season nicely, but also has the majority of space adventure and survival in it that the entire show has to offer. This is what I wanted, full measure. I wanted smart people in space solving critical emergency problems. I also wanted a character-rich story with a little bit of humor and optimism to hark back to the original Irwin Allen show's Norman Rockwell depiction of the nuclear family. I got all of that. Plenty of people have criticized the show for ditching the camp of the original, but honestly, does anyone think that camp is a thing that works now, in 2018?

As absurdly expensive as this show has appeared to be until now, this episode feels like a summer blockbuster film in spots. Maureen's liftoff amid an erupting volcano is a pulse-pounding sequence that network television can never really pull off. It consists of some of the best special effects Netflix has ever implemented, right on par with "Altered Carbon." And as groan-inducing and convenient as John and Don West's survival of their explosion is, their little chunk of Jupiter bulkhead that has become their life raft in orbit is a fantastic visual.

The game of cat-and-mouse through the ship through the back half of the episode, with Robot acting as murderous sentry and the Robinsons sneaking to the Chariot, is some splendid tension and pacing to go along with the whiz-bang imagery. Someone really stepped up their game for this finale. And then we get to the two-robot terror scene in the garage: leaking spacesuits, an industrial crane, an airlock blown open. It's fun, and thrilling. And that's before the robots start rumbling with each other.

That's all very good, but this episode does have problems with subtlety. It's the final episode, so naturally most of the character arcs that haven't been resolved need a push in the right direction, but some of them are just brought up apropos of nothing. Having Will just blurt "I didn't pass the tests, did I?" feels nakedly cheap and lazy. It's so inorganic a way to resolve that plot point by simply having this kid intuit that his mother arranged his test results to be fudged. It also comes up at a point where no one could possibly be bothered to care. Bigger things are happening!
Everything has a dwindling time clock in this finale. The Resolute is leaving...soon! Don and John are going to run out of air...very soon! The black hole is going to shred Planet X...at some point! The harpoon targeting system needs an arbitrary amount of time to...what? Lock on to a piece of debris? Something. By having everything on time clocks, I know it gives an added sense of urgency to each moment, but...you're in space and there are explosions and giant killer robots. That's urgent enough, you know. But still, we need to take time out so that even Victor can get a close to his little arc, eventually staying behind to rescue the last handful of his constituency. That's good, it's nice that he's showing change. Not sure if it will amount to anything, since presumably the Resolute will be out of contact for the foreseeable future, and it mostly exists as a fake-out built into another fake-out.

Another problem with subtlety is the big "make me cry" moment between John and Don West. The comedic aspect of it is spot on, even if the anti-fog material finding its way into West's eye is a pretty contrived way to exacerbate their dilemma. But John's proclamations about his kids, and Don's resulting tears, are just a little bit on-the-nose. I recognized several episodes back that John and Will had repaired their fractured relationship due to mutual respect for each other's talents, and I didn't need Toby Stephens practically articulating to the camera, "Will is smarter than me, and I love him for it." That's scrub-league writing. Still, it works to put a bow on John's character, and he's miles beyond the gruff Bad Dad Astronaut Dad we started with.

In contrast, Maureen and Dr. Smith's relationship might be the best subtle dynamic on the show by the end. There's that same mutual respect, but also pure hatred. Smith's ability to intuit an escape method from the Hub, along with Maureen's cunning plan that got her and Robot locked in there in the first place, are great reversals of their typical lanes. Maureen usually is the one finding a solution through ingenuity, while Smith is usually the one manipulating someone into doing something stupid.

I like that Dr. Smith saved John and Don, and I like that her reasons are ambiguous. Sure, she probably does have some measure of guilt, but she also is planning ahead. It's a good way to endear her to the family that she is now marooned with, right?

Speaking of that, there was a nice unknown factor at play throughout this final episode: by the end, will the Robinsons go forward in their adventure with all their other survivor friends, or just the core cast? Now we know. The alien tech aboard the Jupiter 2 slings them across the universe yet again, and Will connects it with Robot's primitive drawing of his place of origin. So, whatever one might think of this season's "Lost" or "The 100" formula, it's safe to say that next season has the potential to be a completely different show. I'm excited by that. As entertaining as it was to see Dr. Smith weasel out of her wrongdoings, Robot be a source of tension between the Robinson crew and all the other survivors, and Penny to go through a teen romance with Vijay, I think in order for this show to grow beyond its weaker aspects it needed to pare down the cast to just the core characters from the original, and let them develop further.

-I was simultaneously put off and amused when John and Don's piece of bulkhead wreckage audibly creaked in the soundless vacuum of space. The sound design of "Lost in Space" was splendid throughout the season, but...come on.

-Now that we're going back into space, everyone has traded their adventure vests and t-shirts for their shoulder-padded Zap Brannigan suits. I'm fine with it, because the adventure vests look maddeningly mundane for a show with such good costuming everywhere else.

-Hey, there's mysteriously a source of gravity on the ship! Why? Because otherwise the episode would revolve around a giant zero-gravity set piece that no one wants to pay for or shoot. But the narrative reason is...alien tech? Eh, sure. Now that the show is going to take place in space more often, that's a convenience I'll allow.

-Maxwell Jenkins has my heart. Will's panic and disbelief upon losing the side of the Jupiter during his daring spacewalk is palpable. And the relief when John literally swoops out of the void to have his boy's back is just good television, a releasing of the tension with an emotional undercurrent.

-Thanks for reading along, I hope to see everyone back here again when Season 2 lands next year!