I promise, for anyone who is still reading along with me on this thing, I am not going to treat every five pounds like a gigantic milestone. I'm not. Simply not. But today, I am. Following on this weird parallel, I have thirty entries into this recurring piece, and thirty pounds have gone away. They are hanging out in the street, just waiting for me to step off the porch. I could gain it all back by the end of the month, and I have to keep telling myself that. This is kind of like becoming a member of a drug cartel or a mafia...there's no way I can simply walk away clean when I decide I've had enough. Even when I manage to hit 100 entries, I don't think it would be a time to stop.

I've just fully admitted that I'm going to need to work out and eat better for the rest of my life. Is that progress, doctor? Is our time up for today? Maybe I should tell you more about my childhood.

Anyway, I'm very pleased to have another nice round number to show off to everyone. I still don't feel lighter, or look lighter, in my opinion. I feel like I'm working hard to maintain something that looks effortlessly unmanaged. The idea that I might need to work out and eat healthy forever just to be merely obese is...well, it's not an idea that I like. But again, how much of this is my own brain wiring problem and how much of it is healthy pragmatism? Don't answer that.

The gym was actually a really pleasant experience today. The new show starting today, "Santa Clarita Diet," had me smiling the whole time on the bike, and I actually got a better distance and pace out of it. Maybe the show's pacing, at half-hour episodes and much shorter scenes, has something to do with that. "Lost in Space" was terrific television, but the episode length didn't lend itself well to a lunchtime workout like this does.

Speaking of lunchtime, I ate fast food, and I felt gross and dirty all over. It was quite poor, both in taste and aftereffects. I need to stop that. But at least when I eat garbage now, it's out of laziness and exhaustion and less out of an irresistible desire to consume said garbage. So I have that going for me, which is nice. I need to get back to "rare and appropriate" as my yardstick for eating questionable things.

And speaking of eating questionable things... 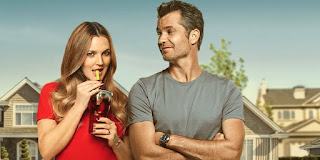 Okay, yes, fine, thank you. Yes. I am now on the Santa Clarita Diet myself, ha-ha. Rim shot on snare.

I really enjoyed this first episode because it played with my expectations. The violent aspects of the show are far more graphic than I was prepared for. The whole "we have to keep this whole zombie thing a secret" part of the premise, thank goodness, didn't extend to their teen daughter Abby. And above all, it's establishing early on that this is not going to be a comedy of tension, but a comedy of manners.

This feels so much like Jenji Kohen's "Weeds" from the color saturation, the mundane detail comedy (Rite Aid and Subway are essentially used as cultural signifiers), the yuppy vacuity comedy, and the use of snappy dialogue to cover wonky plotting. Said wonky plotting comes directly from Joel, Sheila, and Abby seeking answers about Mom's new undead, ravenous state from...the creepy kid next door? Huh? What? That scene isn't a dealbreaker for me, chiefly because of Olyphant's bouncy delivery of both "We're realtors!" and the titular "So then, a bat or a monkey?"

Timothy Olyphant is playing nebbish, somehow? I love it. His refusal to get into a bar fight, his obsession with toaster knobs, and his inability to control a situation are all a nice antithesis to a Seth Bullock or a Raylan Givens character. I've been a fan of his since The Girl Next Door, and he's a great comedic actor who hasn't had a chance to stretch those muscles in years. Joel, the character, is a bit of an odd duck. He smokes a little bit of weed in his car habitually, but a stoner he certainly is not. He's ported over that Raylan Givens ability to wear bluejeans with a blazer and make it look casual-suave, and he's incredibly self-aware about his confrontation with Gary. I like him. He seems nuanced right from the get-go.

Barrymore opens the show not playing too hard into the cliches of her character. When Andy Richter's doofy Glengarry Glen Ross reject yells at her, she doesn't demure. It's a great instinct, from an actress with enough experience to know when to swing for the rafters (like the rest of the episode, wherein "post-mortem" Sheila is on an animated, impulsive spree), and when to not. I really like that Sheila did not sleep with Gary. It would have worked, it would have functioned as a plot for the show. But it also would have immediately felt cheap and against the spirit of the show's premise.

The whole "we live between two cops" thing made me roll my eyes, but thankfully it seems the show will cover for this contrivance by focusing on the two cops being from rival law enforcement departments, and snappy quips. Of course. I sincerely hope that they get the "we're going to be caught by the cop next door" bit done with quickly. It's a far funnier show when the outrageous zombie stuff is a commentary on Sheila and Joel's marriage, or their life out in the happy little middle-of-nowhere.

The mark of a comedy that definitely works for me: I wanted to start up the next episode immediately. It seems like a household in which I want to spend more time. Many thanks to Chris Pranger for insisting on this show since Crossing the Stream began.

-Ramona, the department store clerk, is fantastic. I hope I get to see her again. Her earnest "You're a really good dancer" to Joel's squirrely meltdown was just the button that weird moment needed.

-Nathan Fillion is doing his Captain Hammer thing, and it's perfect for the sleazy bastard he's playing. It's also just a great idea to have him here for the first episode to die in the most gruesome fashion possible.

-Ruben Fleischer directed this first episode, he of Zombieland fame. So glad to see him doing something really good like this, even if it does mean he's still in movie jail for Gangster Squad.

-The Range Rover functions just fine as an illustration of Sheila's newfound impulse control problem, but it's also a pretty naked advertisement for Range Rover, the tongue-in-cheek "Consumer Report" line notwithstanding.