I can't explain it, there's something going on in the recesses of my gut. I know, that sounds like an unpleasant subject that you need the least amount of info on, but hear me out. I've been backsliding terribly on eating fatty foods and candy, and I've been ravenous in the afternoons the last few days. It won't stop. I tried ketchup-flavored potato chips today that someone had brought from Canada like it was some exotic cuisine. Hey, I've had worse chips and I can think of bigger crimes using the sugary tomato residue. But why did I eat that?

I'm at a point suddenly where I'm asking myself "Why did I eat that?" and I remember not too long ago, merely a few months, where the question "Why not eat that?" So, that's something, but I have to get a handle on my suddenly quite liberal snacking attitude. Even a few days of it can lead me right back to where I started. Maybe I really am addicted to shitty food, if a relapse is that easy. I think part of the problem is FOMO. That's "fear of missing out," in case you're not down with the lingo. Traditionally, I've eaten at parties, the office communal snack table, and at buffets as if I were desperate to experience every morsel. There was a potluck at work and I took heaping containers of food home. It was as if I were both destitute and unwilling to learn how to cook at the same time. I never thought to say no to food, because it would be the same in my head as saying no to someone just offering me twenty bucks, or something.

At any rate, I hit the gym hard and even got some bonus brisk walks in today. I was out of gas this morning and payday is on Friday, so I said screw it and took the bus for the first time in ages. It felt kind of nice to do some reading during my commute, and the walk from the train platform to the office gave me a really good blast of cold air. It seems hokey to say that I've been trying to encourage my metabolism by taking on cold states (cold showers, going jacket-less, etc.) and I'm not totally sure if this is really a thing or not. But my particular combination of placebo effects seem to work for me, and even if it's just a game I'm playing with myself, you don't mess with a winning streak. Superstition has power. Ask anyone you know who believes in the literal healing power of prayer.

And--if I may amuse myself with a ham-fisted segue into our television review--speaking of superstition's power over people, especially during a transitional or transformative time in their life... 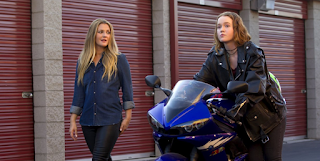 As Season 1 of this show closes out, the reliable and relatable comedy has to take a backseat to the lore that has been built in. I get that, though I may not be happy with it. The more that this odd, supposedly medieval Serbian zombie curse gets fleshed out, the more invested I'm supposed to be in Joel finding a cure or some stopgap to Sheila's new state. That aspect of the show has bugged me from square-one, because I know realistically that Sheila cannot be cured; there wouldn't be a show if she were cured. So the deeper we dive into the paranormal rules of this suburban fantasy, the more time is essentially wasted where there could be something better.

This episode illustrates that problem by having Joel head to "Paranormal-Con" with Eric for a whole lot of variations on the same joke, while Sheila and Abby get to have "mother-daughter stuff" that actually advances the characters, their relationship, and the broad metaphors that the show uses to find emotional truth in something as absurd and fantastical as a zombie story.

Abby's joyriding on the dead guy's motorcycle turns out to be less of a drastic change of her lifestyle and more of another momentary act of rebellion. I like that she confesses the whole truth to her parents so no secrets are bogging down the B-plot of the episode. Instead, Sheila takes the situation as a teaching moment that blossoms into some "Santa Clarita Diet" branded mischief. Which, if we've all been paying attention, is contractually obligated to include yet another canister of Dan's tear gas.

"Lately, there's always something more important than Abby," Sheila observes early on, and between this realization and the recent loss of toes and eyeballs, spunky new go-getter Sheila is finally aware of the consequences of her new "best life." This is a real mid-life crisis parallel. It's hard to get your groove back and be a responsible role model to a smart kid who trusts you implicitly.

But at the same, no one wants their kid getting sandbagged by a chop shop. Trying to smoke out the second sexually abusive brother from the chop shop using Raffi CDs seemed like a good gag on paper, I bet. But it's a very cutesy joke, and I'm glad it didn't last longer than necessary. But let's focus on the real big question here...What the hell is with this storage facility? Between the cannibalistic murderers, the pedophile chop shop, and now this third set of ne'er-do-wells who got tear gassed by mistake...who the hell were they? Are we going to find out? Probably. One thing this show hasn't done yet is introduce a character without adhering to proper comedic economy. They will be back.

Sheila's eventual confession, that her newfound insistence on Abby's college future comes from her fear of impending decomposition, is a universal parent feeling that Barrymore manages with aplomb. Parents are frequently worried, in the back of our minds, that we won't be around for the important things. That's why cellphones even have cameras! The sudden Mom urge to snap a picture or capture a piano recital predates sexting and recording instances of police brutality by decades.

That Sheila's fears are a lot more literal doesn't cheapen her attempts to set Abby straight before it's too late. And because Abby has always been written and performed as a fairly emotionally mature girl, it makes sense that she would feel the weight of her mom's uncertainty. There's a lot to chew on, here.

Then, there's the A-plot. Eric going along to Paranormal-Con to "translate nerd to English" is the first step down a spiral-staircase of depicting "nerds" and "weirdos" as some different, pitiful species of human. Nearly all the guests at the conference are shut-ins or keyboard warriors on the Autism spectrum. There's some amusing reversal in Joel, with his chiseled good looks and casual interactions, being branded the outsider in a sea of outsiders. But it isn't enough to breathe life into this (purposefully?) low-rent convention show floor or the smug philistine Anton.

Joel's confrontation with Anton in the bathroom, and even the follow-up with a more legitimate necro-nerd, all comes off maddeningly slapdash. It would be one thing if Joel's relentless pursuit of a cure were being depicted with the good intentions and sometimes delusional hope of someone fighting a terminal diagnosis with dubious spiritual remedies. But there isn't really time for that at this point.

And besides, it's clear that the road trip to Oxnard serves less of a purpose to connect our anti-heroes with Dr. Wolf than to bond Eric and Joel together. Joel taking a step into Eric's world is fine, even if that world is rendered cheaply. But the best aspect of this entire plot thread lies with the slow building of Eric's confidence. Joel "arresting" Eric loudly to lend him some credibility isn't quite as cutesy as the Raffi gag, but it's close. I'm just glad something constructive came out here.

-Of course, the other major thing to come out is the introduction to Dr. Wolf, played by Netflix's own Lindsay Bluth-Fünke, Portia de Rossi. If the side characters played by Nathan Fillion, Patton Oswalt, and Thomas Lennon are any indication, I bet this doesn't go terribly far.

-Lisa's coy double-entendre about Anne's frequent visits:
"She comes like, all the time."
"That must be...nice."
"Really nice."

-Eric's frank discussion with Joel about Dan's death was a great way for the writers to power through a necessary bit of exposition without belaboring the point, and also avoiding late-in-the-season secrets that lesser shows might seize on.

-Eric moderates a sub-reddit, which makes him kind of nerd-famous...that's an okay joke. Eric somehow thinks that this modest level of nerd-famous warrants autographs...that's a slightly better joke. Take it from me, a guy who used to be slightly less famous than Eric in certain corners of the Internet.