In an effort to curb my excessive snacking and perusal of communal foodstuffs, I spent a good portion of the day sequestered. I was glued to my computer, or glued to the stationary bike. Well...there was a fire alarm.

And that fire alarm put me about 100 yards from a 7-11 and a Subway. Now, I know. It's not enough to cause me to float like Fred Flintstone, but that combination of familiar bread aroma and questionable deep frying had my stomach going loud.

I had a fun conversation with coworkers about a possible fire alarm and evacuation while I'm in sweaty gym clothes. This would be a bad day for me. I'm self-conscious enough stomping around the office in that state. Taking it outside is something closer to stepping out my front door in my underwear. You just have to respect a radius on this. And really, really, what are they going to do to me if I take five minutes and get dressed instead of filing outside like salmon going upstream? By the time I get dressed, everyone will be coming back in and the whole thing will be over. Right? Right.

I'm totally rational about this sort of thing, and not at all in denial about it. 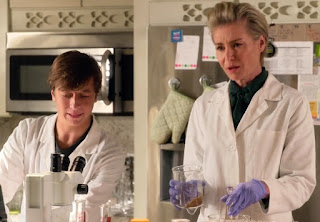 It takes confidence to end your first season of a dialogue-heavy comedy on a narrative cliffhanger. As anyone would have predicted, Sheila Hammond remains a flesh-eating undead realtor, and the household's precarious situation has gone completely sideways, even by their new askew standards. Sure, Netflix has never declined a second season of any of their original programs, so it was probably a pretty sure bet that this wasn't the end of the series, but most television uses a season finale as a bookmark, a place to logically stop for a spell. And most of them will craft that finale as some sort of resolution, even if it's only the end of a character's current arc or the dust settling on an immediate conflict.

We begin with a helpful little video introduction of the newest character, Dr. Cora Wolf, from childhood onward as a science prodigy and CDC genius, and eventually a reclusive private researcher with knowledge of a viral zombie malady. Let me get this right out of the way: the decision to give a brief overview of the character's entire history so as to skip straight to her involvement with Sheila's condition is a great structural shortcut that the show's run time and formula demanded. The further decision to bake this montage into a gag, with Eric as the editor and narrator of the video using random stock footage and his endless, friendless free time is even smarter. But the execution still left me wanting. It doesn't play broadly enough to distract from how quick and sloppy a device it is. But hey, Kanye says to never apologize for your creative choices, right?

Another thing you should never have to apologize for? Your chosen method of killing your undead spouse when they eventually succumb to their aggression and hunger. Joel's shoot-from-the-hip answer that he would "bash your brains in with a baseball bat" proves to be a huge dividing moment in his marriage. And though Sheila's bizarrely specific idea of a silk pillow and a pearl-handled revolver is hardly rational either, it's telling that Joel doesn't bother to think harder about how hurtful his answer might sound. He's either become laughably desensitized to the violence, or he's just at a point where he's associating Sheila with all the zombies from the movies who are unstoppable beasts.

But let's meet the main attraction of the episode. Portia de Rossi's performance as Wolf is dry as a bone, and manages to nail the idea of a grown prodigy with eccentricities, but without straying into Episode 9's more broad examples of socially awkward nerd archetypes. She's a great foil for Skyler Gisondo's enthusiastic assistance as Eric, and as something of a twisted role model for Abby.

The whole debacle with the Safeway brand guacamole getting on the four-hundred-year-old Serbian book is the kind of gag that I appreciate a little more, because it handily takes the piss out of all the mystique and pomp of the book's supposed importance. Also, it feeds Abby's growing concern that she has nothing constructive to do. Which, by the way, hurray for the return of Ramona, the sedate Rite Aid clerk whose mundane observances always accidentally lead someone to an epiphany. I wish like hell I could go to Rite Aid and stare at a plentiful series of consumer choices until I achieve enlightenment.

Abby's eventual decision to do something selfless is, thankfully, one of the more subtle touches of the episode. It's growth on her part, absolutely, but it's also such a reckless act that it most certainly feeds into her unsatisfied need to do crazy rebellious things. Abby's arc, as it turns out, is to mirror her mother's pure embodiment of the id, only in a more teenage fashion. Also, her convulsion prank is very on-point for the character.

So, anyway, Joel and Sheila seek out the vomit of Principal Novak's baka, proving once again that rule of economic storytelling that demands every character introduced has something to contribute to the plot. I feel like the need to acquire "the bile of a full-blooded Serbian" was the big knee-slapper of the episode for the writers, because the word "bile" is used so liberally, as is the concept of Wolf's "usual bile guy." The resulting fight in Baka's living room is kind of the moment that the whole season has been building to, in terms of Joel isolating his emotional instability and Sheila putting her id aside for the sake of their relationship.

Just as with Abby's quandary in Rite Aid, the problem with the Hammond marriage is an imbalance of selfless support and self-fulfillment. Now, with Joel locked in a padded cell and Sheila chained up in the basement, there is no one left to pick up the slack, save for Abby and Eric. The last few episodes have reinforced the resolute vow that Joel and Sheila have made since her death, that whatever may happen they would face it together. As it turns out, that is not an immediate option anymore.

-Eric's stock footage reel is so full of authentically amateur editing maneuvers and devoid of connective tissue that I have to commend whoever put it together. I think the joke just didn't land as heavily as it needed to.