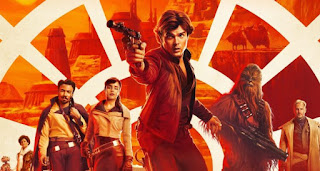 Yeah, this is fun. Especially a second viewing, when you don't have the red pen in hand and your "IS THIS GOOD ENOUGH FOR STAR WARS???!!!" game face on. It's exactly what I expected, a comfy space western that functions as a feature-length Han Solo counterpart to the opening ten minutes of Indiana Jones and the Last Crusade. It succeeds on modest expectations. No, it's not the reinvention of Star Wars or cinema itself. Um, that's cool. It never aimed to be. People have aggressively argued about how "necessary" this particular story is, and...I mean, how do you even respond to that? Were any of the X-Men films really a necessary story to be told? How about that first Pirates of the Caribbean? Would you call any wide release action film necessary? What does that even mean? These are big whiz-bang adventure films. Their purpose is to divert and entertain us. And this one did that for me, absolutely.

This movie also does exactly what these anthology films should be doing. It has moved the process along in converting the Star Wars intellectual property from some blessed/cursed artifact into a more organic setting for different stories to be told. The Jedi don't exist here. The Force is never mentioned. The Empire is barely acknowledged. This takes place in a different corner of the galaxy, and it isn't concerned with bloodlines and destinies and Joseph Campbell. It's just a fun string of capers pulled off by lovable rogues. This is where the new expanded universe is going to blossom. As an ancillary story taking place in the expanded universe, it works great. If this were a comic book series, it would be widely applauded. If it were a cartoon series, it would be embraced. The fact that it's a motion picture baring the Star Wars branding seems to draw more scorn than anything about the film itself.

Oh, it isn't perfect. The same patchwork seams that I saw in Rogue One, after Gareth Edwards' work was hastily refashioned by Tony Gilroy, are present here. But hey, whaddyagunnado? The directors were fired and a very different filmmaker was brought in. Those seams are unavoidable. Just like Rogue One, every new character introduced has so very little time to endear themselves to the audience, just in time to be blown up, shoved to the side, or stashed handily in a narrative broom closet no one will ever mention again. And while the movie has some great kinetic action sequences, it also is in such a hurry to ferry the audience from one to another without letting the characters and plot react to what they are doing or how it changes their situation. It feels more episodic than it should.

None of that can take away what a technical win this movie is for Ron Howard, who has never done anything on this scale before, let alone in such fast turnaround time midway through production. Let me be clear: this film should not work as well as it does, under the circumstances. Howard even manages a few fun motifs that really kiss the ring of longtime colleague George Lucas. Han and Qi'ra's hot-rodding around the grimy streets of Corellia, vowing to leave the one-horse planet and seek their fortune was something elemental of Lucas and his love of drive-in pictures, the youth-in-revolt films that feature a greaser and his best gal taking on The Man in a convertible. An early war sequence is quite arresting and new for the series in its handheld chaos perspective, and the flight sequences that include the famed Kessel Run definitely measure up to whatever CGI nonsense that Dom Toretto and his "family" can muster in the last few outings.

Alden Ehrenreich hits just the right note as a younger, less swaggery version of everyone's favorite space scoundrel. He's not doing a Harrison Ford impression, thank goodness. There's a very Han Solo type of conflict in his performance, a split between "What do I want to do" and "What should I do." Donald Glover gives a crowd-pleasing performance as Lando, but never resorts to cheap imitation either. He reminds me of Josh Brolin's admirable Tommy Lee Jones facsimile from Men in Black III. That's a dreadful movie, but that performance was spot-on, and so is Glover. And, you know what? Can we have a round of applause for the man who will get no credit for his fantastic performance in this movie? Joonas Suotamo's bringing something fresh and lovely to the character Chewbacca, if you pay attention.

But the new characters are something of a mixed bag. Phoebe Waller-Bridge provides the voice of L337, a character that shitty Star Wars fans will be quick to hate, because she's all the things that represent the Disney era of the franchise and its various "problems": she's feminine, she's outspoken, she expands what droid characters can potentially feel and do, and she doesn't really give a shit if you're okay with it. She's a lot of fun. Woody Harrelson continues his fine work in the latter half of his career as an effective cynical mentor character for any blockbuster franchise. But then we come to Emilia Clarke, who I actually quite enjoy on "Game of Thrones" and I didn't mind as a replacement Sarah Conner for the Terminator series. She's fine here, but has so little to hang her hat on that the character seems highly superfluous. And while I understand that Paul Bettany's character was all done in about three days' worth of reshoots on one set, he lacks the menace and magnetism that an interstellar crime lord should have.

I said it when Rogue One came out: if these standalone films in between the main saga carry on with this level of quality, I'm totally down. I'd like for things to branch off into less familiar territory, but they clearly had to get this one out of their system first.