A couple of days is really all it takes to fall off the wagon. I took some personal days to relax, see Solo, and sew up some logistical issues that have eaten my entire week, but I'm still here. And I'm still 34 pounds under my start weight. And I'm still sweating to all the shows that I missed out on while watching the same cartoon with my kids seven million times.

I came back to the gym today with a renewed determination. Then I got on the elliptical, gritted my teeth, and kicked it into high gear. Then I spent about twenty minutes trying not to die. It was a fierce battle, a merry chase, a spirited debate between my brain and my heart valves. Come to think of it, that's a great way to describe every workout I've ever had. But I've been having some personal issues as of late, and the physical release was an effective salve for my aggression and anxiety.

So was all the food and beer I consumed over my longer weekend. At the movies, I inhaled cola, Milk Duds, and potato chips. The other day, I went Godzilla on a barbecue salmon filet and a pack of clearance rack Gushers fruit snacks. Weird combo? Hey, don't knock it until you try it. Stress eating, as it turns out, is really easy to do. It gives me something to do with my hands, mouth, and the lizard part of my brain that wants me to somehow flee regardless of how illogical it is.

Yikes, I have no idea how well-balanced people keep this stuff up. When does anyone have to time to manage a crisis and bust out some sick lunges in the same day? 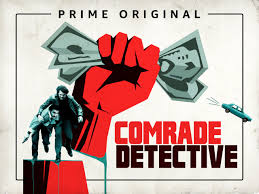 It was a very special time to be in the American entertainment industry in the 1980s. The Soviet Union was still the "enemy" superpower, but the disdain and fear and aggressive sneers across the Iron Curtain during the fifties and sixties had died down to a dull, mutual dismissal of what both sides deemed gross ideologies of the other. Here in the States, we made movies like Red Dawn and Rocky IV, which in retrospect say a lot more about ugly American jingoism then they ever could say about the evils of the seemingly dystopian Eastern bloc. One has to wonder, with a government that oversaw every facet of life for its citizens, what was the anti-American propaganda entertainment like? Was it just as broadly stereotypical? Just as creepily nationalistic? Just as condescending? Yeah, probably.

That's the conceit behind "Comrade Detective," that a Romanian television cop drama from 1983 would be lousy with hilarious takedowns of the capitalist West and ripe for easy nostalgia-based jokes. That's a high-concept idea even before Channing Tatum and John Ronson introduce the first episode completely straight-faced, insisting that the master recordings from 1983 have been fully restored and lovingly translated in order to get an authentic Communist TV experience. The joke, you see, is that this is no joke at all and they are going to present this as a real pop culture artifact. The concept is an almost too-clever one, and it gets in its own way in spots. There isn't enough effort to make the show look authentically 1980s, considering how committed to the bit everyone is. The pacing of the show isn't ponderous enough, the tough guy one-liners aren't groan-inducing enough. And the production values, such as the underground casino, just don't exude "low-rent Communist television flotsam" so much as "quirky streaming service goof that thankfully costs nothing to produce."

It would be easy enough to amp up the melodrama and propaganda just half a notch to make it just absurd enough to be funny. But the show seems more concerned with playing it for accuracy. Then, without warning, just as the tone seems to settle in for "this is a sly commentary type of comedy," we get something as broad as Detective Gregor Anghel drawing a dick in the appointment book at the American embassy. Solid dick joke, crew, but does it really fit the rest of the show? To illustrate the problem I have with this, take a look at two jokes back-to-back within this first episode: the American embassy's chosen lobby magazine is "Guns & Ammo." That's a really good gag that was not overplayed. The two fat, gross Americans in 1980s snob attire diving into giant cheeseburgers and farting...that's not the same thing.

Since the characters are dubbed by very famous and funny people, I have every faith that the tone will level out quickly. Half the time, however, I'm trying like hell to figure out who is voicing a character and I lose the dialogue, which is fine since it's just boilerplate cop show crap. The Romanian on-camera cast members have a delightful authenticity about them that plays into the gimmick nicely, but since they are burdened with playing it totally serious, the dubbing cast gets the bulk of the humor in their timing and delivery. Nick Offerman is a standout as the Bucharest police captain. He knows exactly what his character is, and he's playing it to the hilt. Meanwhile, Kim Basinger cashes in beautifully on her Oscar-winning femme fatale presence from L.A. Confidential and channels it into U.S. Ambassador (and femme fatale) Sally Smith.

Overall, this first episode is less concerned with the plot as it is with establishing the world. Gregor Anghel, a tough guy detective and good Soviet citizen, suddenly loses his partner Nikita in a drug bust gone horribly violent. American imagery litters the clues that point Gregor toward the killer: Jordache jeans, a Ronald Reagan mask, and American dollars. Which is cute. That the American embassy might be at the center of a murder conspiracy fits into that crevice of 1980s propaganda nicely, but I wonder if the show has the ability to maintain a captivating story while clothing it in incredibly specific nostalgia humor and Cold War reverse-stereotyping jokes.

But the world-building stuff? It works. Chess being used as the de facto sport on television is a clever gag, but it's also a good way to establish that Gregor, Nikita, and new mismatched partner Joseph are intelligent men suited for their profession. The Jordache jeans, while a potent reminder of the era, are also a spot-on contraband item to center part of the mystery around. But every once in a while, things get just a tad too silly. The song "Obsession" by Animotion, covered in Eastern European accordion and warbly yodel singing, is another moment of comedy that works just fine. Not great, but fine. And the image of a sinister killer in a Reagan mask, handing a wad of American dollars to a woman who literally sniffs lovingly at her evil capitalist gains, is sure emblematic of the show's concept. But it's also, so far, emblematic of the show's contradictory comedic instincts.

It's still very, very interesting, and has plenty of potential. And I'm excited to see Channing Tatum and Joseph Gordon-Levitt do something genuinely odd.

-"It's just a neighbor's misguided attempt to redistribute Nikita's wealth, it's all."

-The "sweep shit off the desk in anger" that evolves into a childish fight between the Ambassador and Anghel is just the kind of spirited idea to turn cop show tropes into fodder for comedy, but it fails to play either laughably serious or cartoonishly absurd. It's just kind of...awkward for a second.

-"Man, did you see the American football game last night? So many passes!"