Something you should know about me: I voluntarily made the emblem of this website a big sandwich. That was me. My coat of arms in "Game of Thrones" would be a big sandwich splayed across my army's shields. I love a sandwich. Sandwiches are the greatest culinary invention.

I recently gave up an impressive array of sandwiches at a place Rosely and I like on the edge of the city, and I chose the vegetable spring rolls. You couldn't believe the amount of instant buyer's remorse that hit me, I nearly whined like a dog when they gave me my order. A nice turkey, bacon, and provolone on ciabatta bread staring me right in the eyes, and I've got these things. They taste pretty good, actually, but they just can't hold a candle to the combination of meat and melted cheese, with a toasty crunch of bread.

This has been my soliloquy regarding my recent avoidance of sandwiches.

I had a decent ride today, but I got weighed down by a lack of sleep and a full work schedule that has been boxing me in, lately. But I'm trying to kick it up a notch, because I have an appointment with my doctor coming up this next week. I really want to drop as much weight as possible before then. I'd like to make an impression with him. 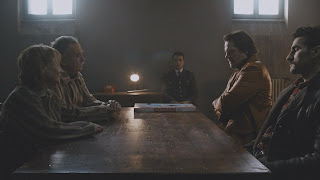 Now that the premise has landed, it's time for "Comrade Detective" to settle in and establish some intrigue, as well as a consistent tone to the humor. For the most part, Episode 2 is a success at both. The plot of this episode continues the rote mechanics of a Lethal Weapon knockoff, with the mystery surrounding Nikita's death and the Capitalist contraband deepening, and the personal investment of the detectives growing. Fedora-sporting Ivan's capture and suicide, while leading to the detectives casually mentioning that torture is a standard interrogation procedure, is also a classic detective trope of the Dead Guy Who Probably Did It, Case Closed. I don't mind the use of this trope terribly, as it is done with a certain amount of atmosphere and leads to one of my favorite lines of the episode. U.S. Ambassador Sally Smith's poisoning via dirty American money makes her cartoonish sniffing of her loot in the first episode a lot more ghoulishly amusing, too. Evidently, the Ronald Reagan Killer thinks so, and he also gets a kick out of some other theatrics at episode's end. No real word on what any of the cold open with the car bomb at the border has to do with the Jordache jeans smuggling, or Nikita's murder. I guess we'll find out later.

Also keeping with the Shane Black love, we get the obligatory chapter of a mismatched cop partnership where the family man brings the bachelor over for dinner, and some tentative bonding over past pain. It's worth noting that while Capitalism is always painted as an oppressive oligarchy, Joseph's story of lightly stalking his wife while he was in the secret police, coupled with her culture shock at such marvels as a gas stove and electricity in 1983, makes the Soviet states look just as imbalanced and backward to Western eyes. So too does the blasé attitude toward police torturing a suspect, and Gregor's sad tale of how he went full Nineteen-Eighty-Four and turned his parents in to the government when he was still a child. Joseph shudders to think of his Uncle Pavel, who is so busy chasing American money with his successful carwash business that he simply could not be a proper husband or father, but neither detective finds the irony in the Anghel family being shattered by their government's philosophy of encouraging family members to turn in anyone who might be "subversive."

Comparisons between the two superpowers' cultures litter the entire episode. The border guard insists that the bomber's car, a Dacia is the best car ever made (with the best radio to match). Meanwhile, the hospital staff lays claim to the best medical care in the world (barring a suicide, as we see). In the Soviet Union, everything is the best...not objectively, but ideologically. Unlike Gregor's parents, who we see in a flashback reveling in the finer things--a luxurious fur coat and a quality timepiece at least. The West is materialistic, preferring a pursuit of the most expensive, quality products, whereas a good Communist accepts the Party's declaration that their products are the best in the world because of their universal availability and lack of exploitation of the common worker.

As far as performances go, Channing Tatum imbues Gregor with a decently jaded half-drunk grumble, but his natural comedic ability--a kind of good-hearted doofy demeanor from his Jump Street days--still comes through when it shouldn't. Chloe Sevigny's subdued performance as Sonya has a more purposeful goofy turn when she screeches in horror at her daughter's proximity to despicable Yankee bluejeans. I am sad that Kim Basinger's character is already gone, but for what it's worth, John DiMaggio manages to play two different crooks (who are both dead by the end of the episode), and could easily come back for more.

The show still fails to find "ha-ha" funny very often, and instead settles for clever and pointed parallels between the proud Communist viewpoints of the Romanian citizens and their counterparts that the show's audience likely grew up with in Western Europe and the U.S. But it's already a lot more focused and grounded from the choppy yo-yo act of Episode 1. And because of this, it's a much more interesting show.

-The Monopoly set found in the burned-out car is the sly kind of humor that the show does best. Gregor and Joseph find the game monstrous, a method of indoctrinating children into Capitalist selfish thinking by teaching them to step on the necks of their fellow citizens in order to win a financial goal. Which, you know...is kind of true.

-"Whenever I get frustrated, I just think...what would Lenin do?"
"Lenin would FUCK HIM UP!"

-Gregor's parents are dubbed by Richard Jenkins and Debra Winger, who give their characters an appropriate amount of humility, gravitas, and gentle acceptance to their son. I hope they get to return as sort of Capitalism-themed Hannibal Lecters helping the detectives solve the case from the gulag.

-"Suicide? That bastard. No man has the right to take his own life! That is a right for the state, and the state alone."
Labels: blog Crossing the Stream