It's official. The plateau in my weight loss is here to stay. I haven't lost anything in about a week and a half. I've gotten really lax about the little things. Indulgences. Sugars, carb-heavy snacks, and lots and lots of meat, which I set out to reduce. It's hopefully just a hiccup brought on by some outside stress-eating. Everything is fine, situation normal. Slight nutrition malfunction, but everything is fine, we're all fine, here. Now. How are you?

I think I've failed to incentivize this whole arrangement with myself. There's no carrot in front of my nose at the moment, aside from some time to write out my thoughts instead of sprinkling them on a taco and eating them. I need something to look forward to. Funny thing, while trying to reboot my whole eating and exercising programming, I've also been trying to toilet train my son. The boy is surely my own; he never stops reminding us that we owe him a zoo visit after 30 days without diapers. He remembers that I said he could go fishing. And not for nothing, he's doing pretty good. Better than I expected.

So, what's a logical incentive for me? Something that is not food-based, let's say. I'd really like a tattoo, and it would make sense to mark a change in my physicality with something to ornament myself. That sounded much less creepy before I read it aloud. Can I get permission to bail on the word "ornament" at all when talking about my body?

Thanks. Anyway...you see this episode of "Comrade Detective"? Because, whoa. It's something. 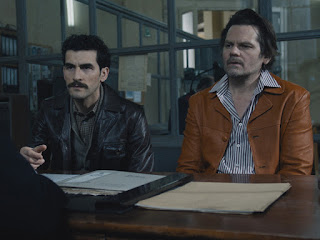 There's undeniably a lot going on in the comedic concept of "Comrade Detective." Here at the halfway point of this short season, we have an episode attempting to hit all of the chief hallmarks of the show: a fun send-up of 1980s nostalgia, a biting social commentary of capitalist America under the guise of Cold War propaganda, and a riff on stale cop dramas and their various formulas.

First off, Episode 3 marks the return of Channing Tatum and John Ronson as themselves, the curators of these supposedly exquisite episodes of a Soviet artifact. And...yet again, I feel like they sat down and said "Here is where we introduce the show like pretentious airheads," except pretentious airheads introducing a novelty like "Comrade Detective" usually have their remarks prepared. Ronson and Tatum, unfortunately, are clearly improvising here. I genuinely didn't expect to see these guys again, except maybe the final episode. But, yeah, they say "Stanley Kubrick" about thirty times and insist the deceased auteur was a superfan of the Romanian noir program. This is a perfectly decent premise for a joke, thanks to Kubrick himself being so eccentric that the plausibility of his fandom for a Soviet television show is unusually high, but...there will be no jokes. Okay.

The common trope of a religiously themed serial killer is worthy of a lampoon. It's a really lazy plot that still gets use on "Law and Order." The self-aimed commentary of "Comrade Detective" is also a great place to deploy it, with Brian Cox giving a spellbinding performance as the mad, murderous priest who is connected to the smuggling ring. While the casting is a slam-dunk, I almost feel that the genuinely chilling effect Cox has here is a complete waste once filtered through the performance of a (possibly intentionally?) mismatched physical actor and the tongue-in-cheek tone of the show.

Because all religious proselytizing sounds like the rantings of an insane person to the ears of good Communist cops, the common psychotic fixation on the Bible seems even more exotic and crazy to them. Once the actor playing Father Streza starts gyrating joyously to the same Nu Shooz song that marks the return of the Gipper-impersonating killer, we're in fully weird territory. The only thing that might freak out a good Soviet citizen more than Christian clergy is Christian clergy dancing to the same insidious American music that Joseph's daughter Flavia later breaks a radio in order to silence.

Jenny Slate and Olivia Nita's coy secretary Jane is now the interim U.S. Ambassador, because she's been entirely too much of a presence on the show to be cast aside. She and Gregor end up conparing Romania, with its high literacy rate and documentedly better sex, with America's crime and AIDS-riddled husk. No matter the situation for me, an AIDS joke like this one just always seems to teeter at the top of a fence marked "GROSS." I've since accepted that the show isn't going for out-and-out comedy, but this seemed purposefully unlikely to draw any laughs.

As far as the noatalgia-baiting, the cinematography took some credit. The synthesizer pop playing during the extended, gratuitous sex scene is so authentically '80s that I'd swear shots of it are taken wholesale from the desperate, frantic sex scene that marks the end of Act II in The Terminator.

The episode suffers from the same plot progression problems of the last few episodes, in that the mystery of the week has a tenuous connection at best to the overarching mystery of Nikita's murder, and is discarded quite quickly. If only the intricately slapped together detective story were just an anthology of "Rockford Files" style cases instead, the show could lean more in the direction that feels more natural. Now, with the Gipper absconding in what looks like a medical truck and Joseph in a coma, the halfway serious nature of the plot of the show can only kick into an even higher gear. I just hope the comedy gets to come along for the ride.

-The more that Gregor Anghel refers to his country hick partner as "Goat Fucker," the less enthusiastic I am about the joke.

-"Okay, look...healthcare is a fundamental human right. Believing in a non-existent god is a sign of insanity."

-Flavia, Joseph's teen daughter, is listening to illicit American music that sounds suspiciously like Rick Ocasek of The Cars belting out "Are you ready for the best girls? The knee-showing, sex-having, big breast girls?"