I want to believe the big sales pitch that says exercise is good for managing stress, or it's a good way to blow off steam. I don't quite buy it, at least not for myself. The best way for me to take my mind off something is to actually take my mind out of the situation and occupy it some other way. So far, exercise keeps me right in my stress but with an extra dose of exhaustion. But you know my mantra: hey, I'm still here.

I do think it is time for me to go back to the militant program of Day 1, back thirty-some pounds ago. I would love to be at my lowest weight possible tomorrow for my doctor's appointment, but honestly I'd just as soon not care what my weight is and feel better not caring. But, I'm not there quite yet. I get on a scale at an alarming frequency, and when I don't like the number, I have to stew over it for a good long while.

Maybe the solution to the plateau issue is to step up my game. I've largely been sticking to cardio the last few months because I was focused on rapid weight loss and didn't want my muscle mass to increase with excessive weightlifting. Perhaps when I hit the halfway mark at fifty entries, I'll add a low-weight and high-rep weight program to the cardio. If anything it will kill more calories, and I could certainly use the help. My portions have gotten smaller, but the calorie count on my food has been going up. Turns out, when I eat less I want to eat worse things, like I'm trading a lack of quantity with a lack of quality, which is not too bright. But hey, I never proclaimed that I was very bright. 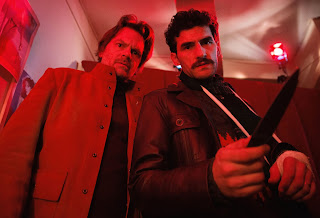 After a lot of table-setting, the mystery surrounding capitalist paraphernalia smuggling and the murder of Nikita Ionescu by a madman I'm going to consistently call the Gipper, "Comrade Detective" is ready to lay out the case much in the style of Hercule Poirot. But don't worry, the really crazy stuff is just getting started. Case in point, Joseph is haunted during his coma by the twisted memories of his and Nikita's adolescent trip to New York City. The dream is a David Lynch nightmare of paranoia, consisting of violent robberies, salacious stares, and one man kneeling in the street screaming "My contagious AIDS!" It's the most aggressive and hallucinatory version of the show's biting commentaries of the West

Meanwhile, Gregor hits the books on America's history and culture, and the highlights dissolving across his studying montage are the startling kind: slavery, Jim Crow, MLK assassination, dropping napalm on Vietnam, Nixon insisting "I earned everything I got," an encyclopedia entry on Bedtime for Bonzo (an honest-to-goodness chimpanzee comedy starring America's sitting president in 1983), and amusingly, just the word "Excess" in big bold letters. I liked that little punchline, while simultaneously saying out loud to no one, "Why would the word 'excess' float across the screen in English...in this 1980s Romanian show?" For that matter, why is "Battleship Potempkin" on the marquee of the cinema in English? Or even Gregor's evidence map in the police bullpen? Okay, the show isn't as committed to its own bit as even the opening credits are. Still, it's a good goof.

Once Gregor has a full picture of American life, he essentially takes a stab at profiling the Gipper. His laying out of the entire case on the police station cork board is peppered with a plainly scathing indictment of America. It seems to be the thesis statement of the show, a very 2017 commentary that profits will always come first for capitalists and that we will always hold the greatest respect and reverence for liars. Ronald Reagan is the President, but he's also an actor. And as the twitchy Bert Bubescu reminds us later in the episode, acting is essentially lying.

So, the game is set. Joseph and Gregor plan to pose as illicit soft drink dealers to infiltrate the Western smuggling by way of the propaganda-porn empire. It's a cute cover story, particularly the new villain Bubescu's sampling of the goods with a twitchy caffeine-as-cocaine rush. It gives exactly the same tense feeling mixed with amusement as when Alfred Molina did something similar in Boogie Nights. The plan goes south pretty quickly, though, with Gregor waging a one-man firefight through the gaudy mansion in the show's first bona fide action sequence that works. It was shockingly effective.

The drugging and raping of Joseph, particularly right after his recovery from being hit by a truck and put into a coma...can we let this character win, just once? Nope, he's also going to be arrested. The setup that lands both detectives in cuffs is a swift and merciless one that displays the Gipper's gift for flair. Only Joseph could be arrested because he raised his kids so well in the Communist eye that they inform on him. Only Anghel would be capable of sleeping so deeply in a drunken stupor that the villain could smuggle the missing actress's dead body into the cop's bed.

Boy, how are our favorite comrades going to get out of this jam? My bet is, they get out quickly and easily, because there are only two episodes left.

-Something the show hasn't really tackled...what was Soviet Romania's attitude toward nudity and sex as entertainment? Gregor and Joseph are disgusted with the film that interrupts Battleship Potempkin, but likely for the capitalist ideals on display rather than the naked junk.

-"I'm telling you guys, the first thing these guys do is frisk you. I don't care if you're fucking Trotsky, you go in and you're getting frisked."

-Joseph's gentle insistance that his son be prepared to inform on family members in   Episode 3 gets a nice follow-through here when the boy turns his own father in, but it's also a clever callback to Gregor, who informed on his own parents at roughly the same age. Being a good Communist, even for kids, required a toughness.