I'm not going to pretend that I wasn't very pleased with the reaction my doctor had when I went in for a basic check-up. He shook my hand, briskly rifled through a dozen standard questions about my health, and then said, "Looks like you're doing better than the last time I saw you. You know you're forty pounds lighter than you were in February of 2017?"

I gave him the briefest of earmarks of everything that I write here. My food situation. My new exercise regimen. The constant checking of the scale and the need for a new wardrobe. My doctor, Dr. Kim, is a former military doctor. Went to school in Bethesda, you know, the kind of guy you might actually describe as a "sawbones." He's a very cut-and-dry, blunt man with not a lot of time between patient visits. That's why I like him. He's the first doctor in my life who took a look at me at age 25 and said, "You're fine. You're young. Everything seems to be working fine. You're too fat, and you know that, and you know that you need to work on that. But now is the time." Hey, turns out he was right.

So that was fun, but I certainly need to get a handle on this holding pattern I'm in. I've been about the same weight for the last few weeks, and I need to drop just a mere six pounds to get down to what I was at age 17. Wow. What a palpable victory that will be. And it wouldn't be the end, not by a long shot. I need to modify the plan. Starting Monday, we're talking weights. A lot of weights, in the arms, chest, back, and abs area, especially. Now that I've taken off the outer layer, it's time to actually ditch the doughy shape. So, weights and cardio together, like my new version of peanut butter and chocolate. Except I hate it, and I don't want it, but I'm taking it anyway.

And as far as fueling the motivation behind this insanity, I'm going to consult with a few people about a tattoo that commemorates my victory, a short fifty-six entries/workouts from now. If you have any ideas or suggestions in that department, shoot me a comment or a tweet. I'm getting excited about the idea. In the meantime, how would it strike everyone if I printed up a bunch of shirts that read "I lost forty pounds watching television, don't @ me!" 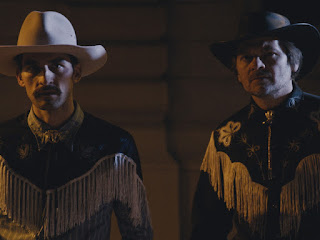 I feel as though I've given off the vibe that I'm not digging "Comrade Detective," and that's not the case. I really like this show, I just wish the parts I liked were more front-and-center. And I wish the consistency of the commentary on American values was more stable. Frankly, a show as inventive as this should have all of its comedy be more consistant.

Speaking of which, Tatum and Ronson return, and this time with a joke about the subtitles and dubbing of the show. The reliable standards for this topic are, in no order, "no one likes to read subtitles," and "voiceover work is really cushy for actors." You betcha, they hit both of them. I know I've been unenthusiastic about these intros, but this is...better? It's still completely improvised, you can tell from the high level of repetition and the low level of actual payoff in their discussion.

Anyway, the show proper drops us directly into the action side of its cop premise. The Baciu family, minus Joseph who has just been arrested, is menaced in broad daylight by the Gipper, and Chlöe Sevigny's frantic performance makes the skittish flight from the museum to the family apartment all the more captivating. Her adrenaline steadily increases through the intonations of her voice as Sonya. She really is a terrifically specific voice, and she knows how to use it.

After the shock of that cold open, we transition to the smug, self-satisfied interrogations of our heroes. Anghel's interrogation scene with Dragos rotates around the table as they spar back and forth. Joseph's, meanwhile, is limited to brisk closeups and profile shots while Stan trots out the faux-Michael Jackson merchandise found in Joseph's floorboards. It's an admirable bit of visual storytelling that emphasizes the differences in the two detectives' personalities. I've only just noticed that Jason Mantzoukas plays Dragos, the redheaded rival detective. The telltale moment was his petulant exclamation of "Dick!" as the button on the interrogation scene. Jake Johnson has been Stan, Dragos' partner, this whole time. Now that the plot has finally drawn them into the mystery, one can appreciate how straight both of them play their second-tier detectives through the series.

Johnson's character being revealed to be a subversive (and more than that, a killer involved somehow in the Gipper's conspiracy, if not the Gipper himself) is a wonderful scene for all the fresh life it breathes into the dustiest of clichéd plot twists. There's never a more basic way for a scene to succeed than to have two good friends having an important conversation without knowing the most important things about each other. Of course, this scene also has the awkward call-out to Donald Trump, to which could I just say...UGH. Could we just...not? That's not sly commentary, it's about as subtle as an atom bomb. I have nothing against the show examining Trump's disturbing dog-eat-dog philosophies from the perspective of good Soviet citizens, but by actually conjuring the image of the man himself, even the 1983 version, this will date this show instantly and unfavorably.

The episode's feinted conceit, the "good cops framed and trapped in prison" plot, is a good one to explore the way Communism treated their ne'er-do-wells. Instead, we get a Fugitive-style bus escape that would be much more likely in an early '80s television show. For one thing, it's cheaper. For another, it progresses the plot a lot faster, and there's only one more episode after this one, so that's important at this juncture. This episode kicks up the scale of the events so much that one can't help being underwhelmed by the budgetary constraints on display. The prison bus crash, consisting of a little cosmetic flames across the nose of the vehicle and a casual stop in a grass field, is pretty sorry. The resulting explosion, which is only heard off-camera while Gregor and Joseph disappear into the brush, is something close to making a joke about the problem, but the joke doesn't overshadow the problem enough. I'm not asking for CGI robots or anything nuts, but if you write a bus crash, shoot a bus crash. If you write a bus crash and can't afford one, call yourself out on it and the audience will forgive you, especially if you happen to be writing a comedy that ostensibly makes fun of cop shows that can afford it.

That ramping up of the scale does definitely work for the back half of the episode. Very suddenly, with Gregor's hail-mary of an idea to seek asylum with Jane in the U.S. Embassy, the simple homicide case has become an international incident. The local Romanian news framing this as the inscrutable Americans harboring dangerous traitors of the state is a quick little jab at the manipulative pandering of the media. Then the protest gets violent, which is immediately attributed to aggressive American embassy guards, and without much cajoling the Gipper has a mob with torches and pitchforks.

As far as I can tell, this episode might have the most indicative dialogue regarding the differences in American and Soviet social values. Jane's rejoinder when Joseph asks why Americans are so bloodthirsty is "You try living in a world without safety nets, or social justice. Then talk to me about not caving in to man's barbaric nature." Between that and Stan's emphatic approval of the one man's name on the side of a building crafted by many men, there's a lot of implicit lone cowboy attitude that American values never fail to project. This feeds into the same waters as the fringed cowboy shirts and cowboy hats the detectives wear to escape the embassy. That's over-the-top in the right way, because the joke outfits are narratively sewn into the plot and provide a bit of fun juxtaposition to their grim assault on Constantine's bar. But, uh...Gregor dropping a quick line about Americans and our maniacal Second Amendment rights? Yeah, file that in the same out-box as the Trump discussion for me. It's not that I don't nod in agreement, I just think the show can do better than that. That's early-era "Family Guy" and "South Park" material.

So, with the Gipper's escape through a discotheque full of...folks dancing in Ronald Reagan masks...we've got a whole lot of mess to take care of in only one more episode. I keep thinking the Captain is in on this somehow, since he's the one to personally arrest both detectives, incites the protest at the embassy, and seems remarkably (even suspiciously) gung-ho about Communist ideals, even by the standards of this fictional 1983 Romania. I also just don't know if someone like Stan is a criminal mastermind all by his lonesome.

-*holding Michael Jackson glove* "Tell me about this glove. Why is there only one? What's the purpose?"

-The Romanians protest chant outside the embassy: "Baseball sucks!" Most of the best jokes this show has are background or crowd dialogue.

-Gregor is a very good policeman, noticing that the Gipper's video is in Constantine's bar, and realizing that only someone who knew them would pick their bar as the setting for a trap. I like it when competent characters do competent things, I'm an easy sell that way.

-Evidently I don't know as much about '80s New Wave as I thought; the previously heard song that Flavia Baciu was secretly listening to comes back in the dance club that ends this episode, and it's actually "Are You Ready For the Sex Girls" by the Gleaming Spires, a song featured prominently in 1984's Revenge of the Nerds.