Apologies, I'm back in the game. I've been completely consumed for the last few weeks by a project at work and a hunt for a writing gig on the side. So, as a result I have a lot to cover.

First off, Father's Day was a very indulgent weekend for me. I went to the cinema two days in a row. Saturday was family day for Incredibles 2, with all the popcorn, chocolate, and soda pop I could possibly inhale. Sunday was Solo with my dad and brother, which was a beer and steakhouse outing. Somewhere in there was a bowl of ice cream, too. Jeez. I'm the worst.

Well, not really. For starters, I went to a steakhouse and ordered a steak salad. That's not...entirely irresponsible. And though a recent date night found Rosely and I in a pasta place, we ordered off the Happy Hour menu and caught half the calories due to the smaller portions. Essentially, I'm indulging in small bursts instead of running an indulgence marathon.

Speaking of new strategies, I've started weight lifting! It sucks, I hate it. I don't want muscle mass. If I could choose my build, I would definitely go with something wirey. Lean. But it's fine, I can settle for anything that doesn't mix the word "morbid" into the description. So, anyway, I've been doing lots of reps with a lower weight. I hope this prevents me from getting "swole" as the kids say.

Beyond that, I'm just trying to avoid the stress-eating. It's been something of a rough month to see in America, and my wife, Rosely, is shocked and worried. We've been drinking a lot of coffee into the night, trying to maintain our control of the house to avoid our feeling powerless outside of the house. I'm in a place today that says if I gain back some weight, it's fine. It's not the most important thing at the moment. But I'm still here, I'm still trying. And that's not nothing.

The more pressing matter has been a creeping emotional dread. Not sure from where it slithers, but I have been feeling quite crappy. I'm not creative anymore. I miss my friends. And in truth, I'm sick of writing every day. I've spent years trying to grapple with the lack of an audience and the deal that I made to write for myself first and foremost. The conceit is that a real writer needs to do this. That the words spill out, and the sense of fulfillment should come from the act itself, rather than the reaction of an audience (or indeed, the very existence of an audience). I haven't been feeling that way in a long time. Right now, that's far more distressing to me than an extra few pounds hiding in my fat guy folds.

But I'm still here, I'm still trying. And that's not nothing. Now, for the handful of you who might have been waiting for it, the exciting conclusion of "Comrade Detective." 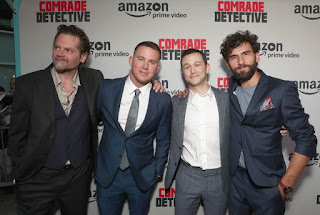 If my initial appraisal of this show was "Hey, this premise is dynamite, but for a smart comedy it's pretty short on the comedy," I'd say my finishing thesis has to be that high-concept comedies have precious little real estate and it should be an easier decision to prioritize the funny over the concept. It's a damn good show, it's just a little too devoted to its own bit.

Curiously, this final episode does not begin with another sleepy intro segment from Jon Ronson and Channing Tatum, which have never really worked that well to begin with. Instead, we get an extended flashback of the events of the pilot episode, only from the perspective of Stan, the crappy detective who is revealed to be an America-obsessed Capitalist pawn. The prolonged aping of dark shows like Criminal Minds is balanced by Jason Mantzoukas as Dragos, and his incessant need to take a wicked shit. I mean...okay. These brand of jokes don't work in this show all that well, but Mantzoukas sure can sell such a gag. It also makes his death a little more sinister knowing that Stan was drugging him for days at the least. Overall, this flashback, ending with the blood-curdling image of Stan as the Gipper, firing those first shots at Nikita and Gregor, illustrates just how extensive the sleeper villain's commitment to his little capitalist revolution is.

Ultimately, it's all quite inconsequential, as Stan is out of the picture without so much as a final rejoinder. It makes a lot more sense when we know he's merely the brainwashed henchman and not the brilliant crime emperor, but this is systemic of the finale's need to sew up the plot and stay true to the era, genre, and political climate that inspired it. It's a difficult balancing act.

Another example is the way the cliffhanger ending of Episode 5 blends into the in media res drop-in after the credits. The image of a bunch of folks in Gipper masks dancing in the discotheque might have made for a haunting final image in Episode 5, but the complete lack of an explanation behind why they are all wearing Ronnie masks is...troubling. Ultimately, it was an ambitious image that didn't fit the narrative or the constraints of the six-episode real estate.

With Joseph's wife still missing, the detectives must take a very "True Detective" style plunge into the abyss of whackadoo motives that fuel the Gipper's little subversive cult, and thanks to the show's top notch use of western materialism and corporate iconography to signify unhinged lack of humanity, it's equal parts fun, chilling, and vaguely depressing in its familiarity. The solemn way the detectives drink their cans of  tainted "Patriot Pop" and belch before instantly falling to the ground is the type of broad joke that usually doesn't work for me, but considering the circumstances and the grim nature of the whole episode, the levity was earned.

Cop shows typically don't have big plot twists much anymore, since they focus a lot on the evidence and the advances in forensic sciences. But back in the '80s? Yeah, You better believe Jim Rockford probably met the villain earlier, or TJ Hooker likely has a history with someone diabolical. It was the economy of storytelling, as always. So, a very alive Nikita's Bond villain entrance, complete with Miami Vice wardrobe and an elaborate living diorama of his Americanized followers, more than makes up for the hokey nonsense of the plot twist. It doesn't hurt that the combined performance of Beck Bennett and Cristian Popa lands on a perfectly balance between unhinged psychotic and enthusiastic salesmanship. Were it not for the sick plot his expository monologue unravels, his word-salad spouting of advertising slogans and voodoo economics terms would be buffoonish, and relatively benign. Here, we have the back half of the show's thesis: put in the right context, the doofy propaganda of the Cold War had the ability to be weaponized.

Then, the metaphor goes further. The twisted dog-eat-dog game that pits Joseph and Gregor against each other in a fight to the death is a literal interpretation of the Communist perspective on Western ideology. The fact that Capitalism has a winner and a loser baked into its design is, to the eyes of a potential 1983 Romanian TV audience, indicative of how worthless humanism must be to anyone willing to win.

This leads me to the conclusion that this show must be positively captivating to young, hip Americans now in 2018 who identify as Communists. "Tankies," as the kids say. It's very easy to see all the evils of Capitalism on unapologetic display and get carried away with the philosophic objections to it. Hell, Karl Marx almost literally saves Gregor, the good Communist, from a knife wound. But as much as Nikita's Ayn Randian bullshit sounds appropriate enough in the mouth of a psycho, the blatant "propaganda" dialogue is treated a lot lighter. As amusing as hindsight may be, the comic device of the detectives constantly spouting Party doctrine about the advanced, racially equal, compassionate, and morally superior Soviet life is always presented with a much lighter touch than the gross American jokes.

It has to be. In the Soviet propaganda this show aims to spoof, there was no subtlety. America is nothing short of an evil empire of narcissists and psychos, while the USSR is a flourishing paradigm of state-controlled ethical responsibilities and rights. The comedy premise of the show is therefore locked into how true the commentary on America was and how ludicrously embellished the Soviet prosperity was. Why one is about as subtle as a tire iron to the face and the other is light as a feather is anyone's guess.

In the end, the sun continues to shine on Romania. The feel-good buddy cop ending feels right, especially with the U.S. Ambassador Jane plotting the further spread of subversive capitalist ideals, the two detectives paradoxically declaring themselves the moral victors while unabashedly, insidiously bugging a U.S. embassy, and the call coming in from Captain Covaci that some sick bastards are on the loose with copies of Atlas Shrugged. Just another day in Bucharest, and just another parting goof from "Comrade Detective" nailing the hypocrisy, disgusting nationalistic zealotry, and complete lack of perspective on both sides of the Cold War.

Honestly, the show itself is a brilliant premise. It even manages to live up to the premise in fits and starts. But in only six episodes, fits and starts doesn't quite cut the dijon in order to make this a great show. It's a good show, make no mistake, and I really cannot stand when a film or show is criticized for not being greater than the sum of its parts. This show is a thoughtful and amusing lark, but with visibly squandered potential. I recommend it, but I also hope for more from a second season.

-Stan's shrine to America, and his recital of the Pledge of Allegiance while displaying his bald eagle tattoo, is a beautifully done cold open, with traces of Frances Dolerhyde from Red Dragon.

-"Who are all these people? How many enemies does Romania have?!"

-Books play an important role in the episode, with Joseph's copy of Marx's Manifesto saving Gregor's life, Atlas Shrugged being name-checked as subversive contraband, and Nikita's insane plot being peppered with tidbits from Adam Smith's Wealth of Nations.

-"They officially made you Ambassador? I guess you'll be enjoying Romania a while longer."
"Until they find out I voted for Jimmy Carter."