Weight lifting is making me age five times faster, I'd swear. Now I require prolongued, elaborate stretches to ease my aching joints. I can't even lift my arms after about 4:00 PM on weekdays. But sore bones just means it's working, right?

Beyond that new development, I'm happy to say that I've gotten out of my writing slump and started working on my new project. I don't know if I'm ever going to show it to anyone, but it's a new and exciting place for me to go and I don't know when I'm acually supposed to find the time. But somehow I'll find the time.

I'll tell you this much...it's really hard to maintain a diet and exercise program when you sometimes have really bad mental days. The last week has essentially been a wash for smart food choices, although one intense snacking session was strategically stocked with fruit and lots of raw vegetables. So, again, more binging in small doses. I can't remember if I've discussed the kids meal trick here or not, but I recently took the kids for a drive thru meal, and I just ordered three kids meals. I ate a third of the calories and a third of the fat of the full size option, and we ate like kings for less than ten dollars. As Donald Glover found out on "Atlanta," it really helps to have a kid with you if you decide to do this.

A word on the new show choice for the next few days: I've heard nothing but good things about "The Good Place" and I was eager for something...anything, really...that would alleviate my depressive period and relieve me of having to type words like "Communism," or "Capitalism," or show how much of my high school civics class I was spacing through. Surely, a show about the blissful afterlife won't highlight all the things wrong with society here in the land of the living, right? 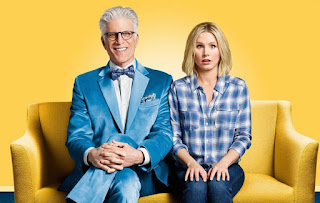 Sitcoms, by and large, have been "hang-out shows" since "Cheers" and "Friends" solidified the idea that plot and setting were unimportant to comedy compared to characters. The hang-out formula has always gone hand-in-hand with its sister, the workplace comedy. But a type of sitcom that I'm quite fond of is the quest-based show. Fans of "My Name is Earl" and "Search Party" can tell you that an ongoing framing device can do wonders for character growth and extracting themes from a show that, by design, is largely just pretty people saying snappy things to each other. So, when "The Good Place" settles into protagonist Eleanor's quest to become morally and ethically worthy of her place in the Good Place, I'm on board. What can I say? I'm a little bit of a sucker for self-improvement stories with a wacky hook.

As far as high concept comedies go, they don't get much higher than this. The squeaky clean afterlife playground for extremely good people is a lot more dense a setting than, say, an improbably large and affordable Manhattan apartment. Ted Danson's character Michael is a delightful way of distributing the ample amount of exposition that comes with the premise, but the real success is making his otherworldly character a fallible, relatable personality. I'm a big fan of his constant tinkering and pruning of the Neighborhood, and his bereft reaction when Eleanor's presence causes weird chaotic snags. It's amazing how Danson has evolved and leaned into a very meticulous form of comedic delivery that works so well for the character.

I've also very quickly become enamored with D'Arcy Carden and her machine gun rhythms as Janet, the helpful heavenly knowledge database and assistant. Just judging from these first episodes, Janet seems poised to become the breakout character, especially if she gets deepened with some kind of permanent personality or growth.

The "soulmates" aspect of The Good Place is one of the stickier things. Is this pairing an implicitly romantic one? What's the deal regarding marriage? Like, is my wife automatically my soulmate, or do I get paired randomly with a kindly older man from Kathmandu and my wife is S-O-L because I definitely die first? Luckily, with the regular cast, it's easy to obfuscate some of the more uncomfortable questions behind this seemingly random match game. Chidi and Eleanor were matched by mistake, and Tahani's bubbly personality has a great comedic foil in the allegedly silent monk Jianyu.

Speaking of Jianyu, or rather Jason Mendoza, how rare and refreshing is it to see a network sitcom throw a curveball like this only three episodes in? And what a relief that the gag surrounding Jianyu's silence isn't a permanent one, because there's no way that works beyond the opening six episodes anyway. I'm excited to have a character that Eleanor can potentially play a moral (or at least logical) authority to. We also were in desperate need of a male character that contrasts with Chidi and Michael. That this is the first major development of the show is good sign, honestly.

I have high hopes for this gargantuan premise, if indeed the plan is to expand the rules and concepts that dictate life in the Good Place. A lot of hay is made regarding the binary outcome of the afterlife; there's a Good Place and a Bad Place, and that's it. As far as we know. Eleanor's insistence that she deserves a Medium Place, as well as the frequent reminders that the Good Place only has the very best people who lived the most moral and selfless lives, highlights that a Medium Place is not actually something that Michael has denied the existence of. Having never seen the show before now, I have no clue if this hints at expansion of the lore going on here, but I'd bet we discover the binary is fuzzier than folks are led to believe.

Life acts that put you in the Good Place: eating a sandwich, maintaining composure in line at a water park in Houston, scratching your elbow, purifying a water source in a village with a population over 250, remaining loyal to the Cleveland Browns...

Life acts that put you in the Bad Place: poisoning a river, blowing nose by pushing one nostril down and exhaling, telling a woman to smile, commiting genocide, overstating personal connection to a tragedy that has nothing to do with you, use "facebook" as a verb...

"Fun fact, all the deceased members of the Portland Trail Blazers are in the Bad Place." That's some cold shirt, Janet. Kevin Duckworth belongs in the Good Place, motherforker.

Tahani's diary has a foreword by Malala Yousafzai and Kylie Minogue.