Boy, is it difficult to expand your workout under the rigid time limit that I have. Every moment of my workday is monitored, including my breaks, so when I use my lunch break to go into the gym, I'm constantly looking at the clock. You know how hard it is to even break a sweat with only twenty minutes on a stationary bike and ten minutes to lift weights? It's impossible. I think this might be part of the problem with my weight staying stationary for the last month or more.

Maybe instead of complaining ad nauseam or shaming myself for eating pizza (which, yeah, that happened) I should focus on some good stuff. I have a new favorite shirt. That's a small victory, but I got this shirt for Christmas some years ago. I liked it, but it was just too small for me to button it. I shrugged and figured I'd wear it over the top of one of my endless comic book or Star Wars t-shirts and call it a casual winter look. Hell, a casual winter look bleeds into spring, summer, and autumn here in the Pacific Northwest. And that's largely what that shirt has been for, another layer that can't be buttoned.

Well, I wore that shirt yesterday. It buttons. It fits, even. It's a little snug around my persistent shot-and-a-beer gut, but it's a dang nice business casual shirt that I find comforting. And who is to say if little things like that don't amount to happiness? I wrote, many years ago, in a notebook that I was using as a repository for good ideas, that the red ballpoint pen with a clicky top and a nice silicone grip that I was using was all the inspiration I needed that day. Somehow, I have the tendency to ascribe complex emotional fulfillment in the most mundane of objects. That explains why I'm such a hopeless pack rat, bordering on hoarder. But it tracks. During a week, or let's be honest here, a month where I was sinking into depression and apathy, that shirt was enough to get me into the next show for this column, get me started on a new fiction project, get me planning for some big life changes that I want to make in order to stave off the depressive days.

Another obstacle that I've had this week is going back to a sitcom for this column. Four episodes a day is...too much. I don't exactly know what I'm going to do next after "The Good Place" but I get the idea that Crossing the Stream is getting less sustainable for me, especially with a lot of new responsibilities at work, and the possibility of a second job looming over the horizon. And I'm not even halfway through the proposed 100 entries. So. Yeah, that's not helping the feelings of failure, etc.

This helped right here, though. The venting aspect totally works. I just wish the television review part was as easy as the word vomit that precedes it. Okay, good talk, squad. 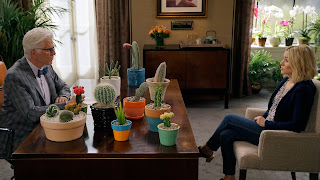 This show is tightly wound in its construct, if you pay close attention. The pilot manages to establish a dense, fantastical premise in a mere twenty-two minutes, and the second episode was already starting to break down that premise with Eleanor causing random nonsense storms and sinkholes. This batch of episodes is, essentially, the fallout of the show's big ongoing problem. Suddenly, the Good Place is filled with lots of murder or torture scenarios for the two characters who have never had to face their mortality, and we're confronted for the first time by the denizens of the Bad Place. They...suck.

First off, can we acknowledge how much comedic mileage comes from the phrase "Category 55 Emergency Doomsday Crisis"? Between Ted Danson's precise articulation, D'Arcy Carden's chipper recitation, and just the redundant amount of panic in the diction of the phrase is great fun. This show dwells in the innocent silliness the best. For instance, the side effects of the sinkhole, complete with Tahani's face warping into a Picasso, is appropriately bizarre in a nice, kooky way. Janet knocking her out with a boop to the nose was a nice touch too. That seems to be the ongoing vibe of "The Good Place" is a relentless chipper demeanor, even when the overarching plot involves a potential reality-shredding mistake that hinges on a personal secret and completely unknown consequences. When you take a step back and appreciate Eleanor's dilemma without all the cute stuff clogging your attention, it's really scary to think of. And that's before we realize that the other Eleanor has to be somewhere, and it's probably not a flying lesson or a frozen yogurt shop.

After the first few episodes did a great job of informing us of Eleanor and Jason's worldly behavior via some very economical flashbacks, I was relieved to see Tahani's backstory deepen her as a character and make her much more sympathetic. Her sister's wildly elaborate laundry list of achievements and Tahani's entire life spent trying to step out of that shadow is a completely relatable situation that the show beautifully embellishes to fit the wacky tone of the series and quickly hammer home the gag.

Ted Danson continues to play Michael simultaneously as a powerful being with a lot of responsibility and a curious little boy completely amused by banal human behavior. It's a lot of fun to hear him wax critical of Season 8 of "Friends" or distill abject defeat and depression into merely the donning of a sad, grey hoodie. The added detail that Michael is the only architect who lives in his neighborhood is also a great help. It gives him another endearing level that informs on his seeming fascination with humans, and it also stalls the inevitable plot progression of Eleanor's mistaken identity.

Jason/Jianyu gets some fun stuff to do, namely his growing bond with Tahani (aided by Chidi and a Magic 8-Ball). His interpretation of "impressionist painting" being an oil portrait of Frank Caliendo says a lot about the writing staff of "The Good Place" and how much they remember from those hallowed days of the early 2000's. It's worth noting that the character's need to be silent around most of the Neighborhood has faint echoes of Raj over on CBS' "Big Bang Theory," inasmuch as it's a fairly convoluted excuse to have one character play the Harpo in a scene for a bit of visual comedy. I like this version a whole lot better, mostly because the jokes that result are a lot better but also because the situation isn't supposed to be a quirky character trait so much as an important plot thread and an opportunity for Tahani to play the straight man.

Speaking of straight man, I'm so glad we finally got to some Chidi flashbacks. William Jackson Harper has a thankless task on this show so far, in playing an expert in moral philosophy constantly appalled and frazzled by Eleanor and Jason's selfish buffoonery. It takes a skilled comedic performer to make a wet blanket really funny as well, and Harper has some dynamite timing with Chidi's constant need to correct his "students" on even the most trivial things. His flashback dilemma, with a colleague's disgusting red-and-spangly cowboy boots, is pretty fun and has a great recurring punchline.

D'Arcy Carden continues to sparkle as Janet, even in what I'd consider to be a muted presence in several of these episodes. Her "does not compute" joke lands only because of how friendly and earnest she plays the character, and the entire plot to deactivate her in order to prevent Michael's retirement is all at once hilarious and depressing at the same time. I half-expected Janet to become a stale one-joke character at some point, but I see now that the show can keep her fresh with the right kind of "malfunction" jokes, like her endless helpful cactus deliveries.

Really, the only possible weak link in the cast is the Eleanor character, despite Kristen Bell's game performance. It's a fine line to have a protagonist be such an aggressive ne'er-do-well, but it's been done before. Krysten Ritter pulled it off wonderfully on the tragically forgotten "Don't Trust the B---- in Apt. 23" but she had Dreama Walker as a constant foil. With Eleanor, we have a lovely cartoon representation of the typical American id, right down to the ditching dog-sitting for Rihanna tickets and free booze. The problem might come from her having no more substance than her past misdeeds and her present predicament. That will change. That's the problem of any sitcom in its first dozen episodes, but when the first season is limited to just that first dozen, it can be a hindrance.

Really, what I'm most impressed with is how breezy the show is. It almost feels like entire episodes are built around maybe one or two pivotal conversations. The premise of the show, as I've mentioned, is such a sticky one that you'd think the episodes would get bogged down by lots of world-building and expository explanation. That stuff is there, but there's an immediacy to everything else...probably afforded by the fact that characters don't have to go to work, go to the supermarket, sit on the phone for thirty minutes with Comcast, or any of the other things that most sitcoms have to assume in between scenes.

-A frozen yogurt that somehow tastes like the reassuring feeling of a fully charged cellphone might be my new favorite thing in the world.

-Michael's description of his Minion prize from a claw machine is "Little yellow toddler."

-The Good Place apparently is quite judgy about everyone's trash television habits, and possible past music-related misdeeds. I'd be in the Bad Place because when I was 16 I got into Red Hot Chili Peppers? I was 16! It's not like it was Limp Bizkit!

-Adam Scott's appearance as Michael's Bad Place counterpart Trevor is exactly the right type of frenemy villain character this show could use. It'll be fun to see who else dwells in the underworld.