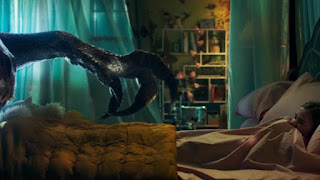 So, this is one of those things where my review probably isn't going to line up with most everyone else. See, my son is four years old, and Jurassic World has been playing on repeat in my house for over a year. He's since graduated to the blessed original, but there's something about those raptors in JW that he really likes. Which is fine. Over that time, I've found plenty about that movie to like. I'm calling myself out as a Jurassic franchise weirdo; I think The Lost World: Jurassic Park is the worst one. Sorry. Please read my other non-dino reviews, I swear I possess taste of some kind.

Anyway, I liked Jurassic World because I expected nothing of it beyond what I got: it's a very flashy soft reboot of the franchise that zeros in on the theme park aspect, and when the extinct animals run amok there are thousands of stupid tourists for them to rampage into. That's really all I was looking for, and I felt like it stuck the landing despite superfluous nonsense like weaponized raptors.

This sequel, written by Colin Trevorrow and directed by J.A. Bayona of The Orphanage and The Impossible, has cemented the latter days of the franchise as something akin to the back half of the original Planet of the Apes films. So, yeah, there's no other phrase bouncing around in my head to describe Jurassic World: Fallen Kingdom except "pretty stupid!" And that's not necessarily a bad thing. All of these movies are stupid, except the first one. All of these movies are stupid. But can you make a stupid dinosaur movie look really good? Sure. Can you give it a really strange plot shift, like a Roger Corman film with a $170 million price tag? Absolutely. Can you use this middle chapter of your proposed trilogy as a very long setup for the most bonkers final act that anyone could conceive of? Yep. This does all these things.

When the early marketing for this one highlighted the "fallen kingdom" with the volcanic eruption causing the giant lizards to stampede away from flowing lava, etc., I was completely uninterested. It just sounded like Trevorrow was already out of ideas and decided to pivot further into an Irwin Allen disaster movie. But when that premise is concluded within an hour of this movie, and we shift to a somewhat gothic haunted mansion setting in the Northern California woods, I was very pleased. The prospect of greedy bastards capturing the last of the Isla Nublar assets and auctioning them off to members of the Legion of Doom sounds, again, pretty stupid...but in a more entertaining way than just watching pretty people run through a jungle screaming for two hours. Bayona injects his own aesthetic into this movie, and thank goodness for that. Trevorrow's previous entry to the franchise was all splashy and colorful excess, which fit the setting of the lavish gigantic amusement park. This one's settings, both the apocalyptic destruction of the island and the creepy American castle at midnight, called for less Spielbergian gee-whiz wonder and more Spielbergian tension and mystery.

The new look fits the entirely over-the-top villainy taking place in the subterranean lair below the creaky mansion, where Rafe Spall, Ted Levine, and Toby Jones trade the usual franchise themes of corporate greed and scientific hubris for maniacal, willfully obtuse avarice. They are nothing short of complete fiends to come up against Chris Pratt and Bryce Dallas Howard. Pratt returns as Owen Grady, a largely vacuous character who has all the necessary abilities to survive the situation, while Howard ditches the angular hairdo and heels to make her Claire Dearing something more of an idealistic ally of the creatures she...previously made a healthy living selling to Verizon and treating like abstract commodities. That's cool, she's grown. The characters of the franchise have been on a steady decline for twenty-five years, and now we just have superheroes and supervillains. And dinosaurs. The folks in charge insist upon their marquee dinos being better developed characters than the humans that speak for them. Last surviving velociraptor Blue and the (at this point) geriatric T-Rex from the original film have a laughable amount of understanding with their mammalian allies, while the Indominous Rex and this film's newly featured "Indo-raptor" are actually labelled by the filmmakers as a sociopath and a sadist, respectively. I mean...fine. Whatever. At least it gives some explanation for why these animals doggedly hunt the heroes instead of just ambling off into the woods to munch on some venison.

Little bit o' spoilers ahead, but...come on, it's a big dinosaur movie. The fifth one. You're fine.

Trevorrow, who came off of Jurassic World as something of a wunderkind, scoring the highest grossing film of all time for Universal, has been taken down a few pegs after his passion project The Book of Henry was dragged savagely, followed by his ugly removal from Star Wars Episode IX. Now that he's retained a Zack Snyder-esque grip on this franchise, it's clear that he had a solid plan in mind to expand the carnage beyond the confines of a tiny island in Central America. Much like Terminator 3: Rise of the Machines or 2011's Rise of the Planet of the Apes, this film ends on what the writer surely considers a game-changing note, with dinosaurs loose on the mainland and presumably terrorizing bystanders. The narrative that leads to this is a real mixed bag, but that hardly matters for Trevorrow, who simply wants to get to the fireworks factory that will probably be called Rise of the Jurassic World. I'm totally on board for a time-skip to a post-apocalyptic landscape where humans are the species about to become extinct. Sure. But the road to get there was...bumpy.

I liked it well enough. My kids thought it was fantastic, of course. It doesn't hold together as its own film that well, seeing as how the first half is a lackluster epilogue to the previous film (and a hokey homage to The Lost World in spots), while the back half gets progressively more ludicrous as it spins toward the table-setting for the next movie that the series architect is actually interested in making. But it was some very attractive, dumb fun. And again, I enjoyed myself because I really wasn't expecting anything more than that.