Let me get confession time out of the way quickly...it was an indulgent few days. A backyard barbecue with beer, carne asada, cake, scotch, margaritas, and to top it all off a s'more by the fire. Yikes. I woke up the next morning with a hangover despite not actually ever being drunk. I was pretty sure I had blown the whole weekend. So, naturally, I went to the movies the next day and ate a massive amount of popcorn and candy. That damage done, I found myself ordering a lasagna for dinner topped with mini meatballs. It was so, so very indulgent.

All that said and done, Monday was the "lets get back to basics" day. To my great surprise, I managed to actually push past the plateau, and I'm now 39 pounds down from the start weight. A mere 16 ounces, less than a Big Gulp away from the 40-pound mark, and my high school weight. Suddenly, now I'm energized. I want that victory, and I'm going to seize it. Dive on it, like the starving man (which, you know, I am) onto a Christmas ham.

The gym also held some new experiences. For starters, today marked the first time I went to the gym in only one layer. See, I'm a layer guy, as anyone reading this knows by now. I put on a t-shirt just for starters, to separate the public from my bare skin. Then I think about the real clothes. A button-up, a sweatshirt, a jacket. I'm one of those guys who championed the "long-sleeve tee underneath a short-sleeve tee" look. It's just what makes me comfortable. And in the gym, I've always felt that I needed that extra layer to protect from unforeseen consequences of repetitive movements. It's a real complex I have. But today, I forgot to grab my gym hoodie, so...a dry-fit workout shirt and basketball shorts. That's it.

I realize this isn't any big deal. For starters the layers thing is merely a small compulsive behavior of mine that affects no one but me. But also, there is no greater gym in the world than a free gym in your office. It's free, and everyone follows the best practice rules and do not look at each other whatsoever. You can't say that about public gyms, though the best among us do follow the rule there as well. But in the office gym, everyone wants to get their physical maintenance done and go back to their desk without much interaction, myself included. So, it worked out fine. And so did I! I'm benching 190 pounds now, which while it's a sad shadow of my weight room antics from fifteen years ago (wherein I was benching up to 220, no problem) it's up quite a bit from the noodle-arms that I started with at 100 pounds a week ago.

Yeah, I guess I made progress. And progress, however incremental, is not nothing. 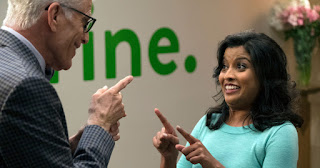 Wow. I mean...holy forking shirt-balls! I've never seen a half-hour comedy on network television blow up its own premise so thoroughly only within the first season. Honestly, it's heroic from a writer's perspective. I've been liking this show, but the way the season ends has me hooked permanently. I'm buying a cactus today!

For starters, the introduction of demon characters from the Bad Place, complete with their own Bad Janet, is so much fun. The show has cultivated a scale of mundane insufferability to classify people on both sides of the screen, which I've touched on. In a construct where buying Red Hot Chili Peppers tickets is a hefty offense, the "Bachelor"-loving, unicorn-slaughtering, cringy party douches that arrive on the train land firmly on the far end of the scale. Adam Scott as Trevor is just a sight to behold. His insistence on telling women to smile or his casual little "I swear to Beiber!" is enough to warrant a kick to the gonads, if he in facts possesses the required equipment.

Guest stars are fun and everything, but this last handful of entries are still firmly focused on the character dynamics that make for a successful, likable show. Particularly, "Chidi's Choice" keyed in to one necessary aspect of any good functioning sitcom, the relationships. Of course, Eleanor's freewheeling style has helped Michael evolve and now he considers her a friend who belongs in the neighborhood. Of course Chidi's persistent purity has rubbed off on Eleanor and she has developed some kind of feelings for him. Of course Jason sees something in Janet that no one else would even consider, and of course Tahani and Eleanor have decided to push through their differences and be friends. Hilariously, we manage to have a few false-positives in there, with Eleanor briefly considering Jason her soulmate because they both equally kinda suck, Tahani thinking Chidi was the one for her, and the Jason/Janet wedding just raising further logistical questions in general.

Oh boy, Janet and Jason. That was headed in a strange, kind of "Westworld" place until the finale's crazed reset of the entire situation. Janet truly is the source of the snappiest moments on the show, and her newfound capacity to love, hate, and defy her programming is exactly what I wanted for her. Janet acts as a curious marker for how the show continues to evolve (or spiral out of control, depending on who the architect is), and her shared moment of bonding with Jason over their mutual obliviousness--and jalapeno poppers--was sweet only in a way that emotionally uncomplicated characters like them can be.

Individually, we also get some late-season expansion of personal demons, particularly Chidi's crippling indecision being what led to his young death. Come to think of it, Jason's stupidity and mindless consumption are what led to his own horrific and ultimately pointless death. We're like four slots away from having all the deadly sins represented. But these guys have nothing on Eleanor and her decision to leave voluntarily for the Bad Place. Her constant hunt for shortcuts and loopholes turns out to be her chief asset in her quest to stay out of the Bad Place, and even a cavalier usage of "pobody's nerfect" seems to improve her station, at least in the moment. Then we also have the introduction of Real Eleanor, the saintly human rights attorney and activist who vies for Chidi's affection and provides a dark mirror for "Fake" Eleanor in which to examine herself. That Real Eleanor is merely Michael's demon Vicki playing a role is an especially cruel twist, but it inadvertantly breaks "Fake" Eleanor of leaning on her standby excuse of an unhappy childhood to justify her mercenary way of interacting with other people. I hope Vicki sticks around in some capacity, but I'm not sure if her character-within-character of Eleanor has much more spark in it now that we know it's an act.

Also, there is a Medium Place for her to escape to. So, awesome. The show has gone so far in such a short time. It's something of a tap dancing act to keep this premise's evolution natural and organic while also stepping up the ongoing plot with every episode, and the introduction of Mindy St. Claire and her desolate spot in between the Good and Bad places (or, you know, as far as we're aware), is a terrific opportunity for the audience to see how much worse of a person Eleanor could easily be. Mindy's Medium realm being just a colossal nothing, complete with only VHS tapes of Cannonball Run II and The Making of Cannonball Run II to stave off boredom and loneliness, is quite cute. But it also shows Eleanor how much she's changed since arriving in the Good Place.

And then there's the final reveal. All at once, Michael's design for these four humans seems the most light touch of everlasting torments, but also the most deep-seeded and personal. On the one hand, a demon like Trevor might complain that actual literal torture alongside a heaping dose of gross, party douche nonsense is the more economical way to inflict the Bad Place onto its denizens. But at the same time, Michael has acknowledged the "eternal" part of "eternal damnation" and has devised a convoluted slow burn that will so thoroughly ruin Eleanor, Chidi, Tahani, and Jason over and over again without them even knowing.

It also ensnares audience members to speculate on all the implications. Was any part of the world-building legitimate? Is the scoring system really that way? Is the soulmate concept a real thing, or just a way to vex poor Chidi? Was Janet's evolution part of the design to cause doofy Jason some heartbreak? And my biggest question...is the cussing filter really just a covert way of taking away a form of expression? Because that's definitely in line with what my Bad Place would be.

I guess in a place where Real Eleanor is fake and Fake Eleanor is the only real Eleanor, it's hard to know anything for sure, except...well, pobody's nerfect.

-A Demon's Idea of a Good Time: karaoke of dictator speeches and racist rants, "Who Let the Dogs Out" by the Baha Men, and hangovers. They like hangovers.

-I feel personally attacked by Jason's insistence that he was not a failed DJ but a "pre-successful" DJ.

-Tahani's favorite British sitcom "Deidre and Margaret" is a cute, brief gag that lands very softly on a dynamite punchline of "It was on for sixteen years on BBC, they made almost thirty episodes!"

-The changes made to Michael's faux-Good Place for the reset, namely Eleanor's new soulmate (a sexy mailman, natch) and the greeting on the wall in his office changing from "Welcome - Everything is Fine" to the much more aggressive "Welcome - Everything is Great!" hints that Michael is going to lean harder into fulfilling his subjects' desires to keep the illusion together.