And boom goes the dynamite.

I had originally planned this to be a project that lasted 100 days. Well, that's not going to be the case, obviously. It's been 105 days since I started Crossing the Stream, and I've hit my first hard target. I've lost 40 pounds. I have miles, and miles, and miles, and some days maybe even some kilometers before I'm done. Pie in the sky, I'd sure like to go another 50 before I slide into routine maintenance of a number.

Too often as an adolescent I covered my problems with my weight with a thick, warm blanket of self-deprecation. If I was the first one to call myself fat, maybe everyone else would just shrug, nod, and leave it alone. This was, in hindsight, a lose-lose. Best case scenario, everyone might silently agree with me and move on, and that seemed to give me license to just not worry about it. Let me be clear...being big is nothing to cause shame. If I've ever given the impression that any of my narcissistic nonsense in these posts was anything more than indulgent manic-depressive diary stuff, I apologize. Profusely. Being big is no sin. Being someone who enjoys food is actually quite the blessing...it sure beats the opposite. But for me, masking the stress and pain and sinking feelings with a lot of casual self-flagellation was the real issue. The food and the lack of exercise was just the coping mechanism for feeling that I wasn't good enough to look and feel the way I wanted. You know how weed people insist that there's no physical dependence or addiction to weed, but it's very clearly possible to develop a mental or emotional addiction situation? Same thing here. I wasn't physically addicted to cookies and sedentary living, but I was emotionally dependent on the comfort it provided.

I still am. At least once a week, I pull the alcoholic's favorite type of excuse: it was a hard day, I need this to take the edge off. I worked hard all week, I'm going to reward myself. Things are falling apart, why shouldn't I indulge? It's hardly the worst thing I could do, I could be shooting heroin. Et cetera, ad nauseam. Not very impressive. I'll do this kind of crap for the rest of my life. The big task was paring back the excessive amounts and the frightening frequency with which I deploy this behavior. Even that is a work in progress over 100 days later. Hell, life is a work in progress. If it isn't, you're...uh, dead. Or rapidly on your way. And funny enough, that was my cult-like mantra the first few weeks of this, before I was linking my weight to my lifelong mental health issues: I'm just trying not to die. Even back then, in March, when I was hovering dangerously close to having a "3" at the front of both my age and my weight at the same time, some part of me knew that I spent my 20s passively trying to reach death-by-steak. 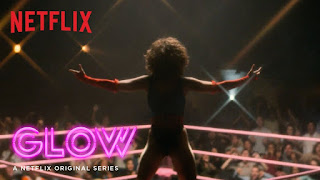 Maybe, just maybe, this was the wrong show to start mere days after applying to one of my dream jobs and worrying nonstop that I'm not good enough to get it. Alison Brie's Ruth, a consummate professional actor with a palpable amount of talent and confidence in her abilities is essentially told, after a rousing and defiant monologue audition, that she's just not what the people in charge want...she's what they think they want. Yeesh, that's possibly the most unhelpful feedback a creative person can ever get.

Right away I get serious "Orange is the New Black" vibes from this show. Ruth's life of perpetual hustle as a struggling actor has the same wry honesty of OITNB's Piper and her introductory, hunky-dory affluent New Yorker lifestyle before the rug is pulled out from under her. The advantage that GLOW has is that I want to root for Ruth, and I never felt that way about Piper before she takes the plunge into a strange world populated by lovable weirdos. Speaking of which, we meet a cavalcade of possible breakout characters who seem to spring upward as if directly from an all-hands-on-deck pitch meeting: a goth girl whose headshot is crumpled into a ball, a sweet-natured girl with a formidable physique, a pair of vapid hairdressers, an absolute badass stuntwoman...not to say they don't seem like fun, but boy do they feel like television characters instead of people. Right now. Ask me again in three episodes.

Oh, and there's also Marc Maron. He is not my favorite person, but damn it if he isn't kind of perfect as the slimy, coked-up man in charge of this buried-on-cable WCW riff on "foxy boxing." That doesn't necessarily mean I'm ever going to like him, but I'm probably not supposed to. There's something mildly endearing to his expert pratfall out of the ring, accompanied by a very natural "Oh, shit...what the fuck!" If he remains something of an obstacle for these intriguing lead characters, it will work. If he becomes the star of the show, it won't.

Oh, so...hi there, nudity. I'm Kyle. I'm not uncomfortable with nudity, but it sure made me blanch slightly while watching on a stationary bike in my office gym. Perhaps I didn't think this through at all. Welp...too late now!

Ruth's slight breakdown at her scene study class, midway through the titular Cat on a Hot Tin Roof scene, speaks so loudly to artists. "I paid for this class. This is the only place where I get to do what I want to do. Where else am I supposed to go?" There's a helplessness that people feel when their work is inextricably linked to their emotions. It doesn't help when even the people who carve a living out of providing a safe, experimental space for such work can't be bothered to even pretend to give a shit. This is such a short little scene, but it hits on who Ruth is pretty efficiently. Thankfully, before it can get too heartbreaking, it's followed up by her binging of Hulk Hogan and Rick Flair footage to prep for her return to GLOW. This montage also gives an insight to our chief protagonist, but in a fun way.

As far as actual jokes go, Ruth's best friend Debbie demurely handing her baby off to a complete stranger before attacking Ruth in the ring is pretty good comedy conceit there. As is the "Is this real?" moment that follows. With timeless stories of actors who just take their stealth auditions a little too far (looking at you, Sean Young and your homemade Catwoman costume), it's completely conceivable that Ruth might craft the whole adultery narrative in an effort to sell herself to Sam. Alas, our flawed protagonist is so starved for attention that she did actually shag Debbie's moon-faced husband, played by Alison Brie's fellow "Mad Men" alumn Rich Sommer.

My only lingering doubt about the show is how far it's going to go in portraying the little start-up  wrestling league as exploitation. Sam's fantastical vision of Debbie and Ruth showboating to an enraptured crowd is part stunt show and part peep show, with both ladies throwing in some seductive hip gyrations that echo their first scene in their period-accurate (?) aerobics class early in the episode. How much of this show is going to be foxy boxing? How much of it will be an indictment of things like foxy boxing? Or a glorification? Is it good that I'm worrying about this, or does it make me a complete fuddy-duddy who needs to lighten up and accept that people find titillation...titillating?

Well, one thing is certain. Nothing will cement me more as a frump-tastic dad type than my recent use of "fuddy-duddy." What effing century am I from?

-Whoa, some of this '80s music. The opening credits playing to "The Warrior" by Scandal may be a little on the nose, but that's kind of fitting for a show about big-haired women decked out in spangly swimsuits and pretending to beat the piss out of each other. Journey's "Separate Ways" gets some inspired editing to go with it, but the MVP song of the pilot is "Stir it Up" by Patti LaBelle over the closing credits. That's some "you don't hear this on the classic hits station" authenticity.

-"Are you hiring actors to play wrestlers, or are we the wrestlers?"
"Yes."

-This note has nothing to do with anything, but you know what? Netflix on mobile is absolute torture if you're backtracking to take notes on dialogue. Hit that "reverse 10 seconds" button, and lo and behold, you somehow break a billion-dollar corporation's app. How ridiculous.

-Man, those little shits who steal Ruth's tacos and purse might be the absolute manifestation of the devil. Savages.

-"Maybe. Maybe it's because I don't like your face. Or your ass. Or maybe I like them both too much. I dunno. I don't have to explain myself. That's the beauty of being a director." UGH. Just like listening to Maron's podcast, my soul hurts a little more.